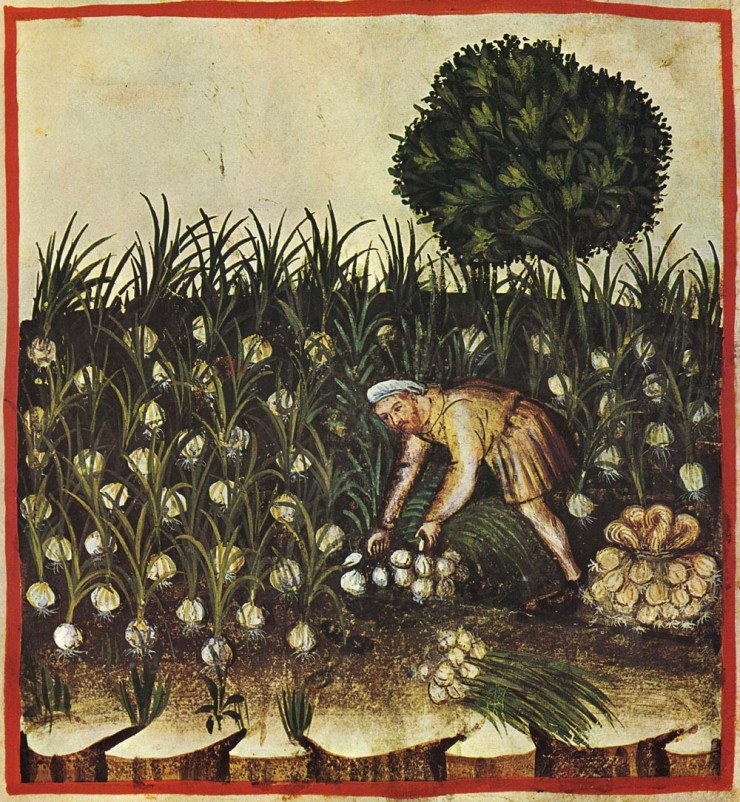 As we (or some of us) have been indulging over the Christmas and New Year festivities, I thought that I should write about a powerful remedy for any excesses. There are many people who use and value this life-prolonging gift of nature, but perhaps a few, still unconverted or unaware, could read this and reconsider. I have to admit my family’s and my own vested interest in the extraordinary properties of garlic, but more about this later. Garlic originated in Central Asia and has other cousins in the family – onions, shallots, leeks and chives. It was greatly valued by the ancient Egyptians, Babylonians, and

Chinese. The Ancient Egyptians would include garlic and onion in their daily diet, and even buried their dead with a supply of it, to be used in the afterlife. The thousands of workers building the pyramids were given garlic daily as it had well-known nutritional and medical benefits. The Ancient Greeks gave garlic to athletes because it enhanced their stamina during marathons. In China garlic was used for thousands of years as a medical marvel, thought to cure several diseases. The Greek physician Hippocrates, regarded as the father of modern medicine, prescribed garlic as a treatment for many medical conditions. His advice: ‘ Let food be your medicine, and medicine be your food’, is now fully endorsed by scientists. The question you may ask is: ‘Why?’

Scientifically speaking, garlic is so potent because it contains sulphur compounds, formed when garlic is chopped or crushed. The most important of these is allicin, but it is unstable and only present for a short moment while the garlic is crushed. That is why it is best to eat garlic raw and let our teeth do the crushing part. Garlic’s other health benefits include diallyl disulphide and S-allyl cysteine. These compounds in garlic are the reason why eating daily at least two, preferably four, cloves of a garlic bulb will boost the function of the immune system and reduce the number of colds and their duration. For many centuries tuberculosis was successfully treated with garlic, regarded then as a natural antibiotic. Garlic will keep our teeth free from decay.

When eating raw garlic, its sulphur compounds enter the digestive tract and then travel all over the body where they positively influence, among others, blood pressure, high cholesterol, blood thinning, brain and cardiovascular parts, preventing, reducing or even eradicating harmful symptoms. The latest scientific research already suggests that the ageing process caused by free radicals can be slowed down by the antioxidants in garlic, because they help the body to resist oxidative damage. Garlic protects against cell damage and this significantly slows ageing.  The combined effect of lowering blood pressure, reducing cholesterol and preventing cardiovascular diseases is thought to be beneficial in protecting against Alzheimer’s disease and dementia.

We now know in scientific terms why garlic was so valued and used daily by the ancient Egyptians, Babylonians, Greeks and Chinese. Firstly, it is incredibly nutritious, useful when you are shifting the huge stones used in pyramid building, and in long-distance running. It also heals infected wounds and many medical conditions as was observed by the Ancient Chinese.  Secondly, garlic contains everything that our bodies need: magnesium, calcium, copper, potassium, phosphorus, iron, selenium, vitamins B1, B6, vitamin C and various other nutrients. It is also low in calories and carbs but high in protein. Garlic is known to significantly improve the health of bones, and to reduce the lead level in the blood of people working in metal factories. What is not to like? 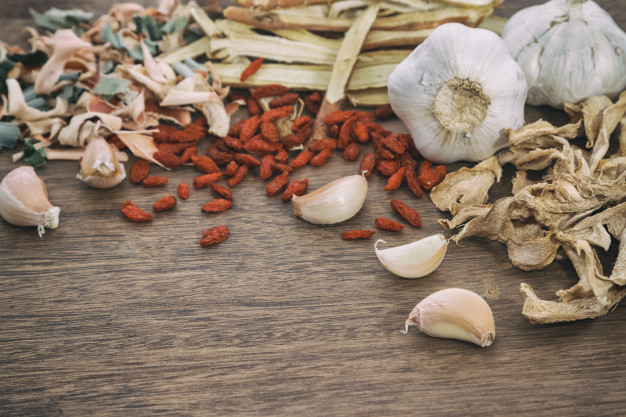 In China doctors used the ancient practice of feeding and injecting patients with garlic in cases of a serious brain infection, known as Cryptococcus meningitis. They achieved a 68% cure rate. It is a quite remarkable result, considering that this fungal infection gets into the spinal cord and into the brain, and prescription antibiotics cannot cross the blood-brain barrier. There is a long-held belief that garlic and onion eaten together daily are good for the circulatory system as they are cholesterol reducing and blood clot preventing. Based on this observation, it was common in France to feed garlic and onion to horses to dissolve blood clots in their legs. In World War I, garlic was used to treat typhus and dysentery. In World War II, the medics were treating battle wounds with garlic with great success, thus preventing septic poisoning and gangrene. Dr Albert Schweitzer used garlic against typhus and cholera. The accurate observations of garlic’s properties prove that crowd-wisdom is not to be ignored. Recently scientists discovered that garlic prevents the harmful side effects of antibiotics, and also that it enhances the body’s response to further use of them. This prevents the body not responding to the often essential further future treatment. 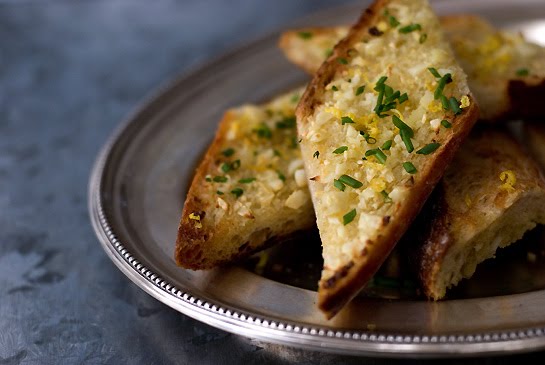 And now to my family’s enthusiastic adoration and use of garlic and onion. My great-grandmother married a man much older than her and was distressed to find that he hated both garlic and onion, and would not tolerate any at home. It was only when she noticed that her husband in later years had lost his sense of smell, that she could indulge in her favourite snack: hot, buttered wholemeal toast torn into pieces and tossed with raw garlic. As long as he didn’t see the offending bulb, he didn’t know. She benefited from her devotion to garlic by being healthy and living to her late nineties. My own experience is similar. Owing to my liking of food rich in butter, cream and other delights so particular to French cuisine, I decided to check the state of my heart and my arteries by having a sophisticated scan at a Harley Street clinic. The results were positive for me – no calcification at all, zero, and my heart’s arteries were clear of any furring. Over the last two decades, as I was creating my wildlife garden, building walls, climbing and lifting heavy equipment, I had a few serious falls but nothing ever broke. It turned out that I have exceptionally strong bones. I also have never had food poisoning, this is probably partly due to avoiding take-aways. There is no doubt in my mind that my daily intake of garlic and onion is saving and prolonging my life, and I am grateful for nature’s great gift to mankind – mighty garlic. 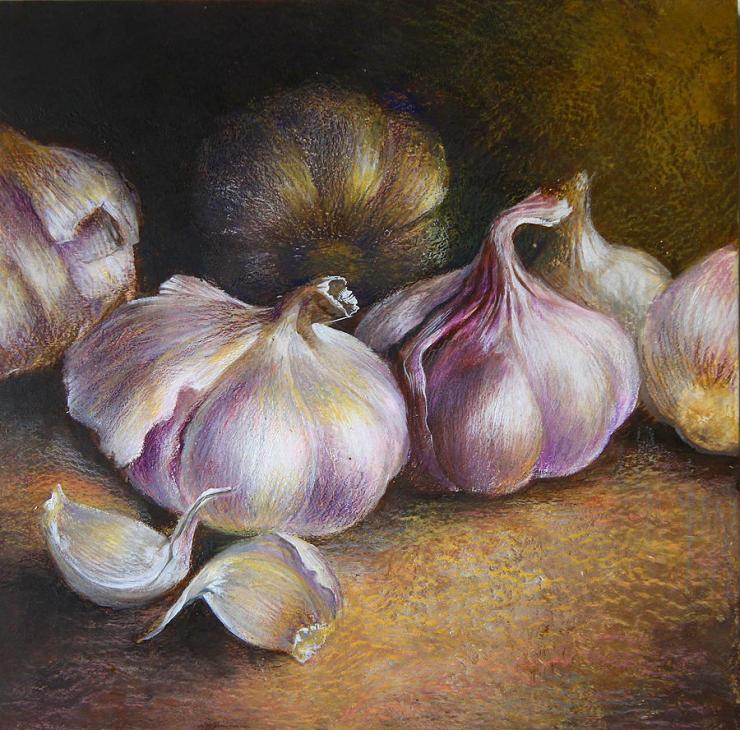