In one of the previous posts I wrote about nature’s thousands of years old influence on human art in every form; from animal cave drawings to the Old Masters, and to my much admired Beatrix Potter. Of course, I couldn’t put myself alongside the Greats, as I don’t (regrettably!) have their talent, but I do have an aptitude for modest drawing. I have always been artistically able, but I have only fully developed an urgent need to paint or draw the animals when I had met them in my garden and friendship followed. In fact, the more I have developed affection with the creatures, the better my hand could draw the funny little cartoons of our adventures.

The picture above tells an amusing story of a hedgehog, called Gaby. I wrote about our deep bond and friendship in previous posts, but I haven’t yet mentioned his sense of humour. He loved to assist me with the ironing by grabbing a freshly ironed shirt sleeve and swinging on it, in the same way that children do when hanging on a rubber tyre that is suspended from a tree branch in the garden. 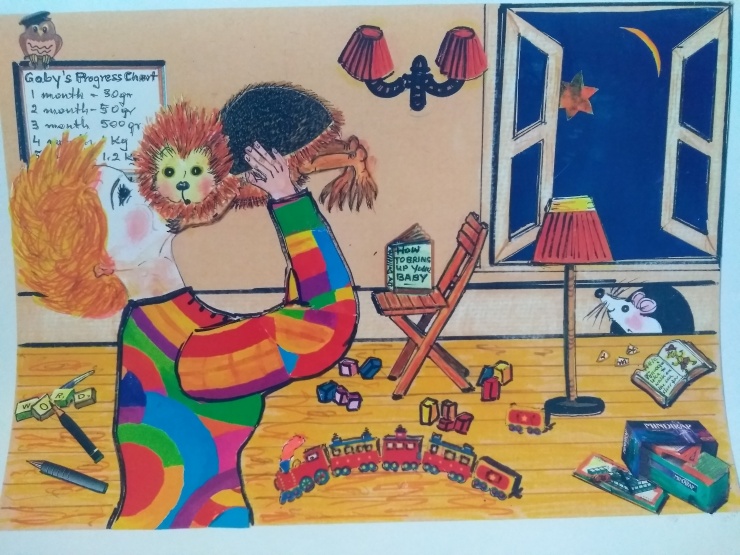 As Gaby was obviously intelligent (the previous posts), I could not resist drawing his progress in a schoolroom. His intelligence level was on a par with a two or three year-old child. He had a long term memory, curiosity about the human world around him and an unexpected ability to learn. This discovery prompted my many drawings. Every evening we had a mutual adoration session as shown in the next cartoon.

The ceremony of putting Gaby to bed was a complex affair. Although he adored freshly laundered bed linen and I have always changed his bed daily, parting was difficult. I would put him on my upturned arm with my hand forming a flat ‘spatula’, similar to the wooden ones used to put pizzas into the oven. Resting my hand with Gaby on top on the pillow I would attempt to slide him into the bed. This Gaby resisted by holding with his very strong hands onto my palm and my fingers. It would take some time to unpin him and inch by inch to get him on the pillow. This sweet goodnight ritual just had to be drawn for posterity. 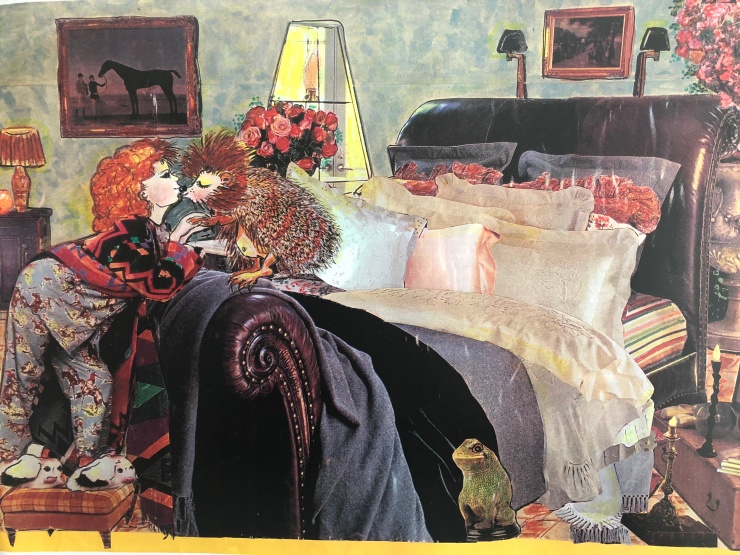 It wasn’t surprising that after several months of living with me, Gaby and I started to look vaguely similar, especially as we shared the same hairstyle. It was based on the spiky hair of the well-known chef, Gary Rhodes, and it suited us both. You can judge for yourself in the cartoon below. My only regret is that I have never told Mr Rhodes about his somewhat unusual fan club. 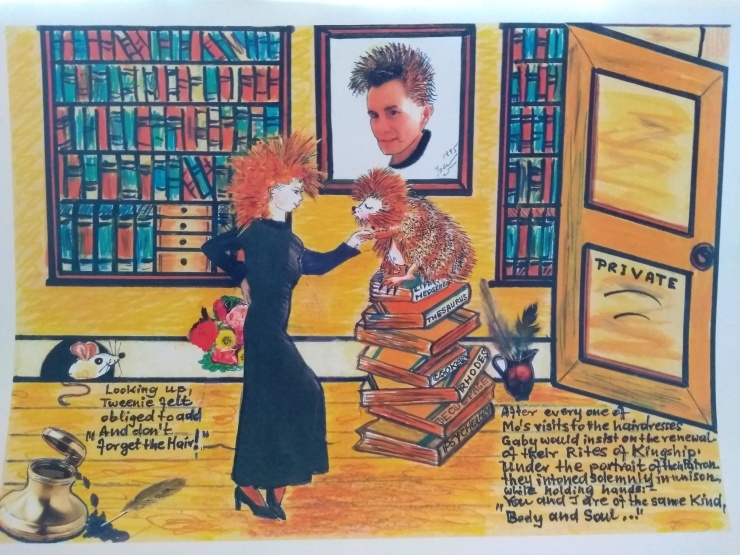 As Gaby was involved in all events, our Christmas was no exception. On finding him one Christmas Day atop the Christmas tree, he was surprised on seeing my horrified expression. “But you call me Gaby, short for Gabriel Angel! Surely it would be my place to be on top of the tree! Don’t you think I look better than just a star?” Yes, I had to agree, he did look resplendent and very much a part of the festive tree.

As our favourite time of the year was Christmas, a time of peace and goodwill to all, I used the cartoon below as a Christmas card. Inside on the red page was a message:

“This is what Christmas is all about” thought Zeb the spider, his eyes taking in the animated conversation between Robin and the once feral but now butter-soft cat, Freddie. “You are a good egg, you really are…” Freddie was just saying to Robin when the white mice, Missie and her triplets, began to sing in their high voices:
“Silent night, holiest night. darkness flies, all is light…”
Strangely moved, they all joined in, united by a magical Christmas spirit. With the decorating finished, the spruce tree bright and luminous was placed on the low table with presents around it. The fresh strong smell of warmed spruce needles and the apple logs on the fire gently scented the air. Suddenly, the logs in the open fire grate crackled in a cloudburst of red sparks as an icy wind whirled and rushed down the chimney and back, before it disappeared, whistling carols among the white roofs and tree tops. Gaby the little hedgehog woke up in my arms and looked around.
“A very Happy Christmas to you all” he said.
“Merry Christmas”, answered all voices in unison.

In winter Gaby led a leisurely life, pampered and catching up on the news and wildlife programmes , especially from faraway places. It was good to relax on a comfy chaise-longue, safe in the knowledge that a strawberry poisonous frog of the rainforest he was watching, wasn’t close by. But what a frog it was! The female peed on the laid eggs to keep them moist.  When hatched, the tadpoles were carried on her back into the safety of the tree canopy. She would also make sure that they were not hungry by providing a clutch of unfertilized eggs for the tadpoles to feed on. She was obviously a fashion-conscious frog – beautifully attired in vibrant red, with only her feet and her tummy white.  Gaby watched her with great attention. 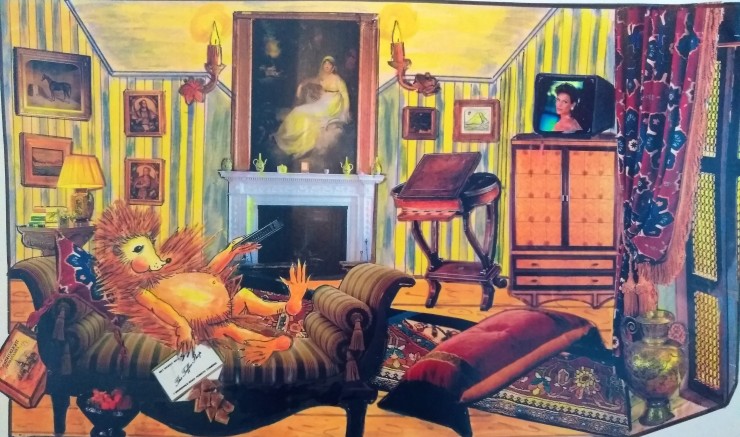 On rainy days Gaby loved playing all manner of swashbuckling games in the attic. His imagination would take him across the seas, up the mountains and through the rainforests exploring and looking for the amazing creatures he had seen on the wildlife programmes we had been watching together. I think he thought of himself an explorer and a naturalist. Sometimes when he saw me watching, he would pose for a second or two to allow me to take a picture. Below is a cartoon based on one photo.

During the summer months Gaby and I would be relaxing in our garden with me softly singing: “Summertime and the living is easy…”from Porgy and Bess.  The busy days of spring and early summer gave way to taking time to look leisurely at the beauty of the flowering plants around us, then having a little sleep before going back inside to have our supper. Happy days! 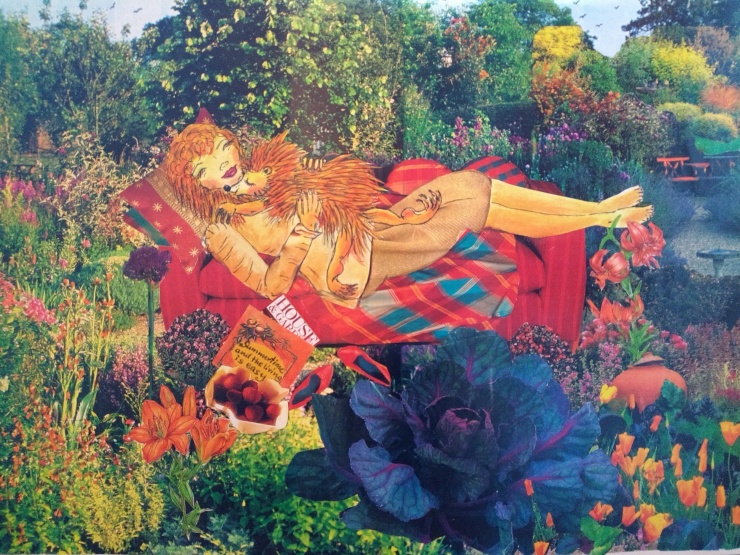 In early autumn the harvest of all the fruits and the vegetables that I grew was also a time of enjoying our garden and the Indian summer before the cold would sent us back into the warmth of the kitchen. The table and sideboard would be full of baskets and large bowls filled with fruits and vegetables. The taste of freshly dug potatoes, which were cooked and then sprinkled with fresh dill, sea salt and tiny slivers of butter, was incomparable with the taste of any spuds bought in a supermarket. The kitchen smelled of ripe fruits –  apples, pears and golden honey-dew plums. Happy days, indeed.

At that time I started writing my book about Gaby, the extraordinary hedgehog. Some chapters are included in my blog. To encourage me to work diligently, Gaby suggested that I create a cartoon of the published book signing, somewhere really grand. This is the result of his inspiring idea, and all I need now is to find a sympathetic agent and a publisher, otherwise it will have to be – Amazon, here we come!

In the next post I will show the pictures that were created by the influence of other wildlife friends of mine. Here is just one – a friendly frog I have written about in two posts previously. One of the posts is called “The Kingdom of Beautiful Frogs”.

And one more of Gaby in his and mine, beloved garden; a  small section of a meadow.