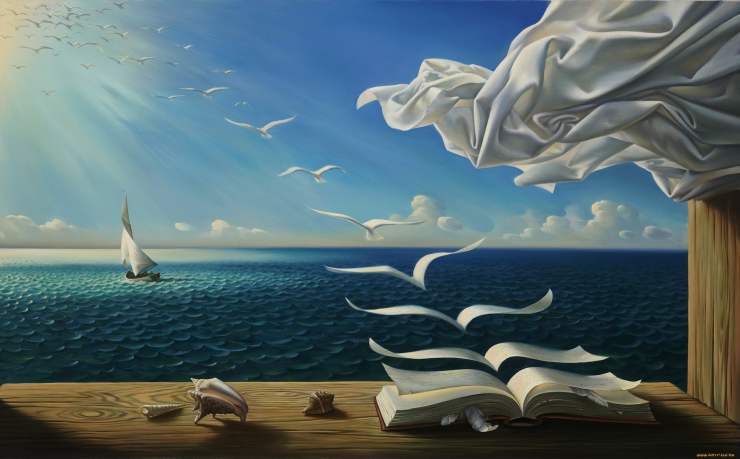 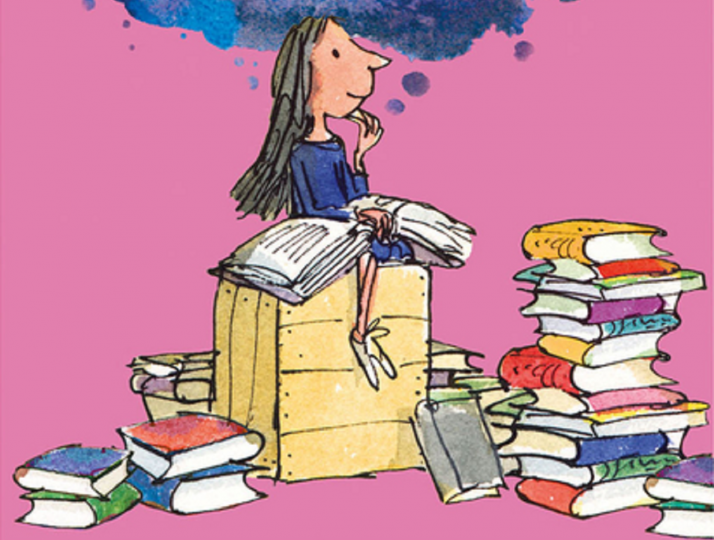 “There is no friend as loyal as a book.”
Ernest Hemingway

“A reader lives a thousand lives before he dies.
The man who never reads lives only one.”
George R. R. Martin 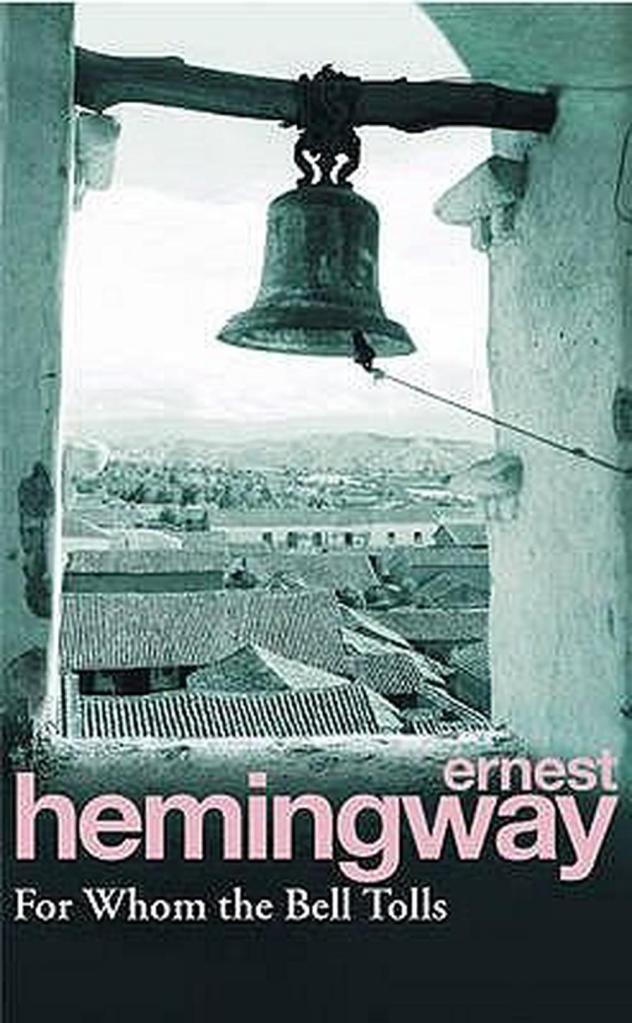 Preludes, Op. 28 – No. 6 ‘Tolling bells’ composed by Frédéric Chopin; this piece is poignant as it was played at Chopin’s own funeral:

I read Ernest Hemingway’s book “For Whom the Bell Tolls” as a young girl and its impact will stay with me forever. His other book “The Old Man and the Sea” had the same effect because he was one of the most original, mesmerising and resourceful writers in the world. When I opened the first book, before the first page, there was this full-page passage that gave his work its title. It is taken from a sermon to King James I by John Donne, his chaplain, in 1623, and this what it says:

“No man is an island entire of itself;
every man is a piece of the continent, a part of the main.
If a clod be washed away by the sea, Europe is the less,
as well as if a promontory* were, as well as if a manor
of thy friend’s or of thine own were.
Any man’s death diminishes me, because I am involved in mankind.
And therefore never send to know for whom the bell tolls:
It tolls for thee.”

*Promontory – A point of high land that juts out into the sea.

I have this most profound text framed and on my wall, it reflects my own mantra – I am a human being first, and everything else after. It prevented me from ever feeling superior to anyone else, and created in me a highly developed sense of social conscience and the need to help anyone in need, human or animal. The second book, The Old Man and the Sea, has the famous quote: ‘A man can be destroyed but not defeated.’ When I had a particularly difficult time in my life, it gave me the inspiration to persevere. 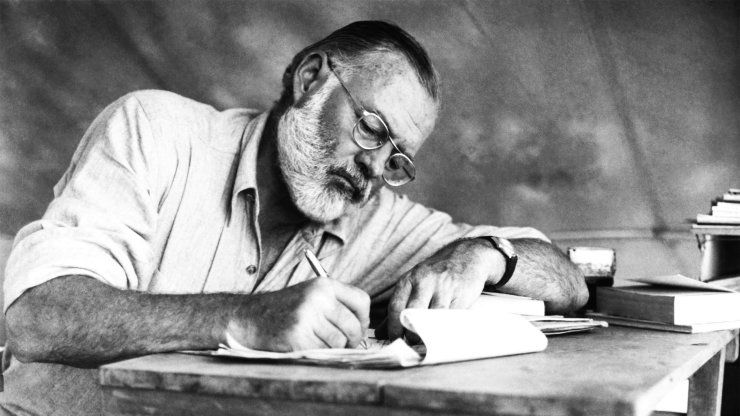 Hemingway’s influence on the course of modern literature is incalculable, and his writing remains intense and vivifying. It tells much about growing up, about solitude, and resourcefulness, about fear and despite it, doing things anyway. His experience in the First World War coloured his outlook on life. 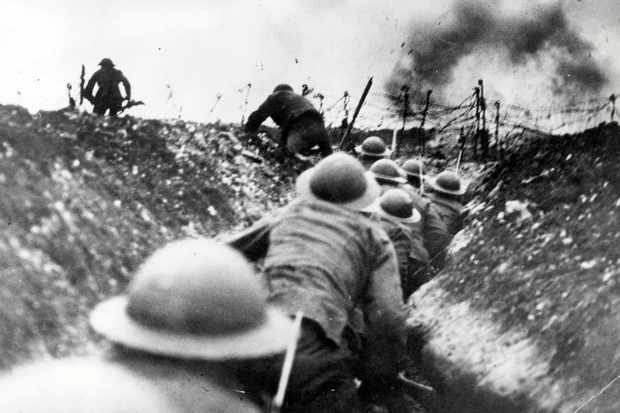 The childhood home of Hemingway in Oak Park, now the Hemingway Foundation 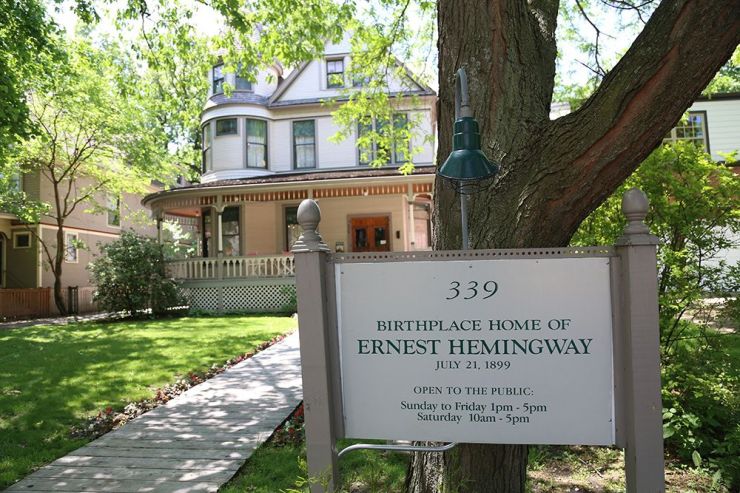 Ernest Hemingway was born in Oak Park, a Chicago suburb. His father was a doctor and he was the second of six children. In 1917 Hemingway joined the Kansas City ‘Star’ as a cub reporter. The following year he volunteered to work as an ambulance driver on the Italian front where he was badly wounded but twice decorated for his services. 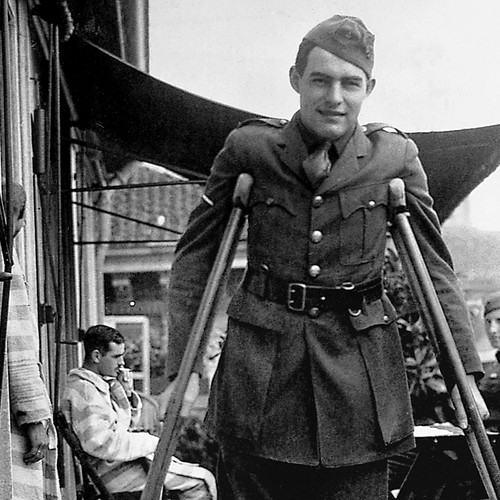 In 1919, he returned to America. In 1922 he reported on the Greco-Turkish war. Two years later he resigned from journalism to devote himself to fiction. He settled in Paris. Other writers, American expatriates, encouraged him to develop his unique style. 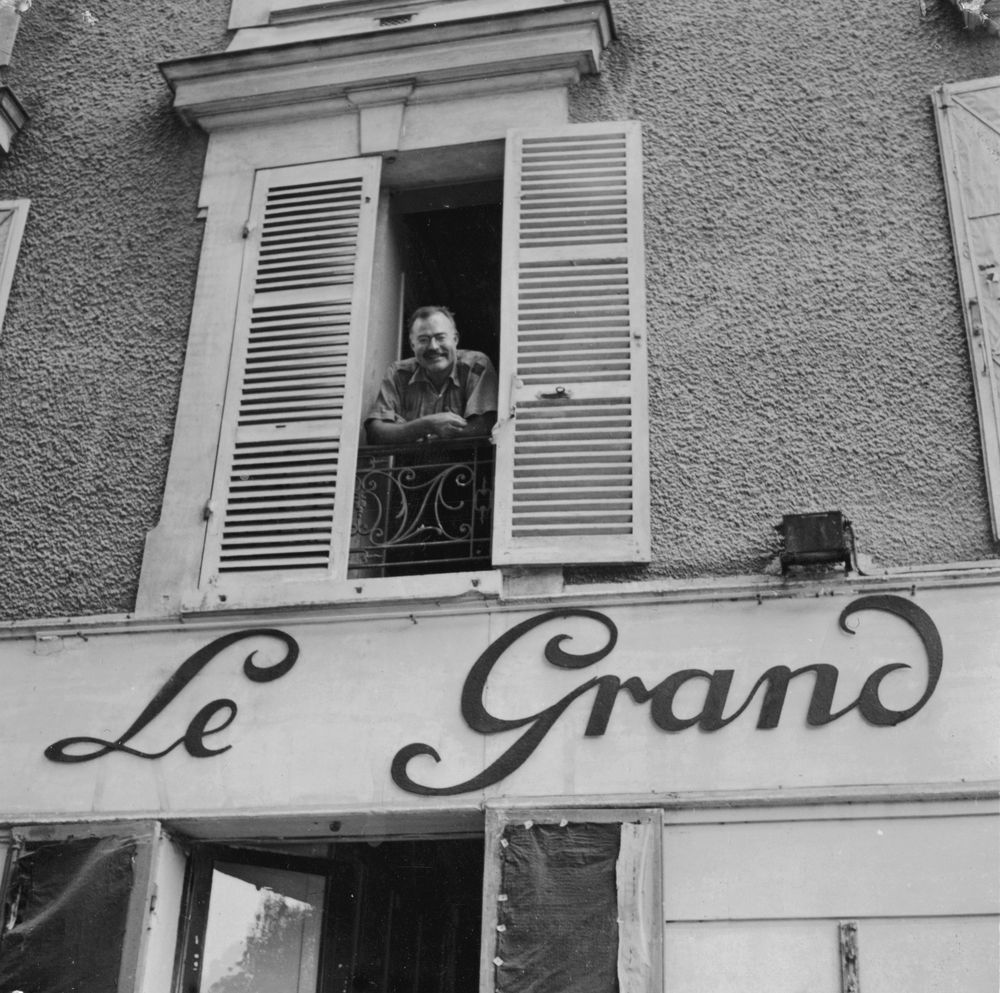 In Paris Hemingway published several books and his international reputation was firmly secured by his three books: In Our Time, A Farewell to Arms, and For Whom the Bell Tolls. 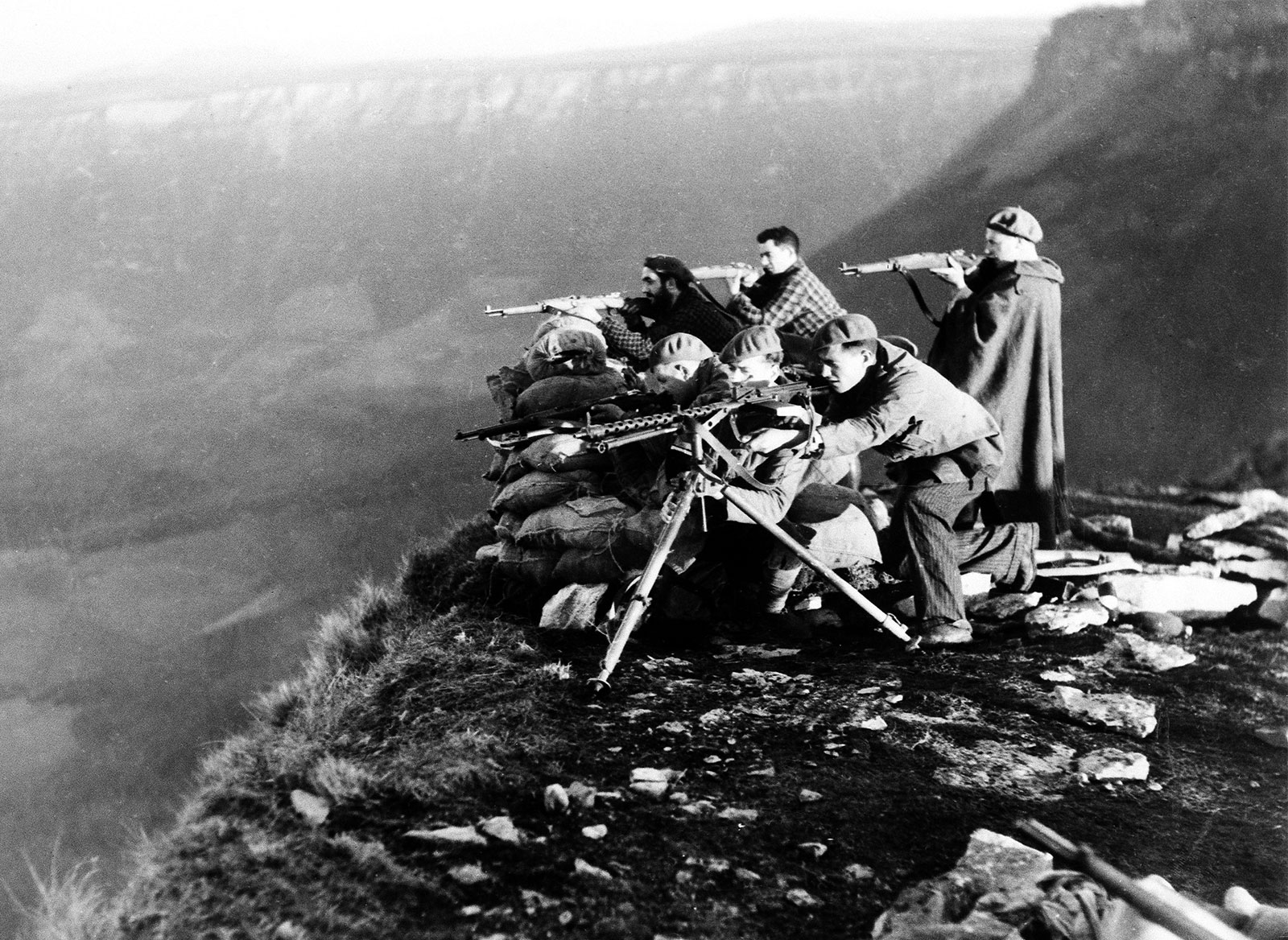 Robert Jordan, the protagonist of the author’s novel of the Spanish Civil War, For Whom the Bell Tolls, became a ‘public hero’ after the book sold millions of copies. He was a far more conventional figure than his predecessors in Hemingway’s previous books. Robert Jordan joins the guerrillas hiding in the mountains because he wants to help in any way he can. He knows how to expertly blow the bridges that otherwise would allow General Franco’s army to advance towards the partisans. 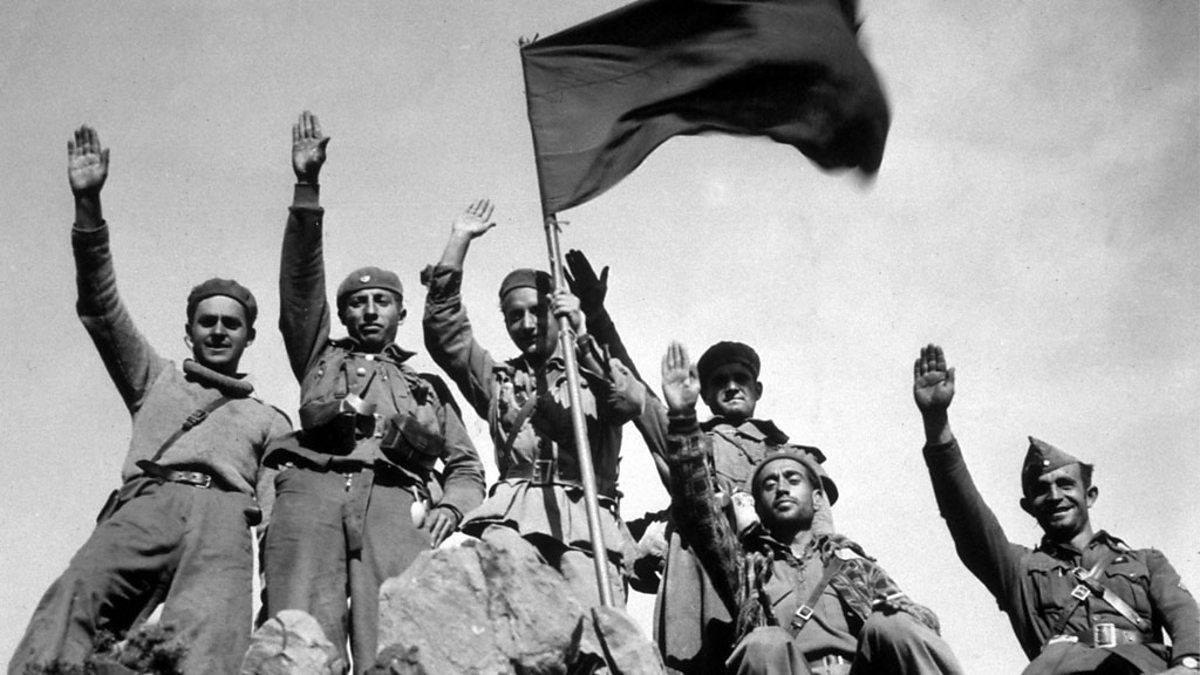 His awkward attempts to grasp hold of some meaning in the midst of the war destruction is compounded by his unexpected falling for a peasant girl, a victim of General Franco’s soldiers. The romantic passion he and Maria cling to is moving beyond description.

“Then there was the smell of heather crushed and the roughness of the bent stalks under her head and the sun bright on her closed eyes and all his life he would remember the curve of her throat with her head pushed back into the heather roots and her lips that moved, and the fluttering of the lashes on the eyes tight closed against the sun and against everything, and for her everything was red, orange, gold-red from the sun on the closed eyes, and it all was that colour, all of it, the filling, the possessing, the having, all of that colour, all in the blindness of that colour. For him, it was a dark passage which led to nowhere, then to nowhere, once again to nowhere, always and forever to nowhere, heavy on the elbows in the earth to nowhere, dark, never any end to nowhere, hung on all time to always to unknowing nowhere, now beyond all bearing up. up, up, and into nowhere, suddenly, scaldingly, holdingly all nowhere gone and time absolutely still and they were both there, time having stopped and he felt the earth move out and away from under them.”

“He looked at her and across the meadow where a hawk was hunting and the big afternoon clouds were coming now over the mountains.

‘And it is not thus for thee with others?’ Maria asked him, they now were walking hand in hand.

‘Thou has loved many others’.

‘ It was a pleasure but it was not thus.’

‘ And then the earth moved. The earth never moved before?’

“Romance No. 1” by John Brunning, performed by  Xuefei Yang: 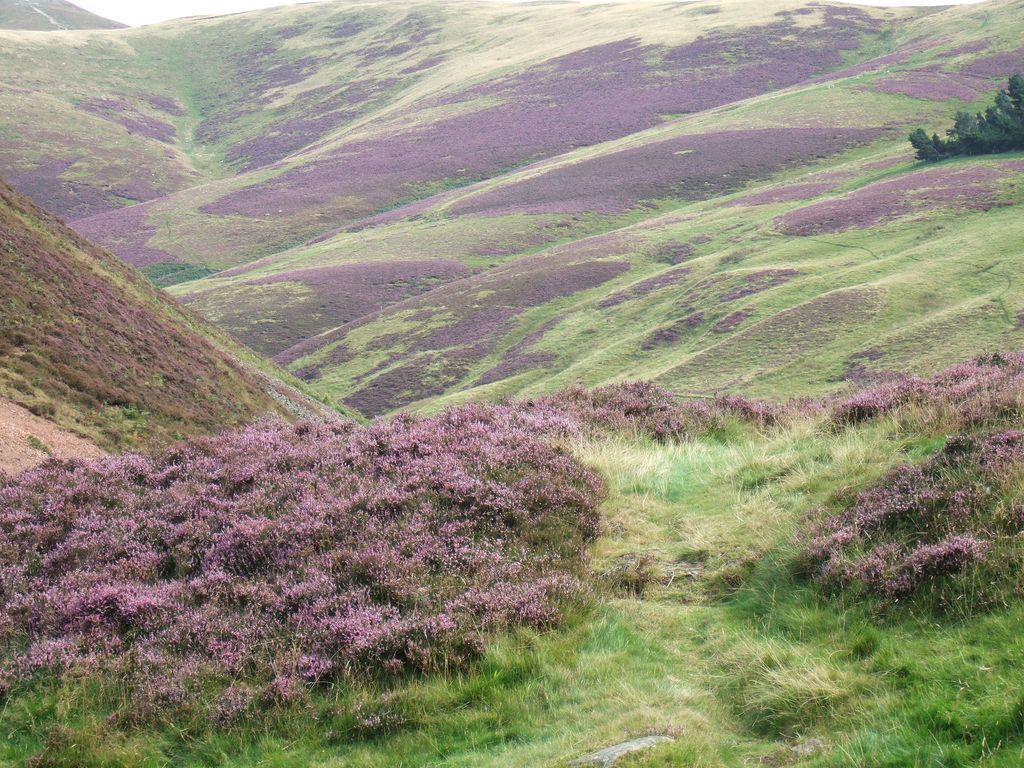 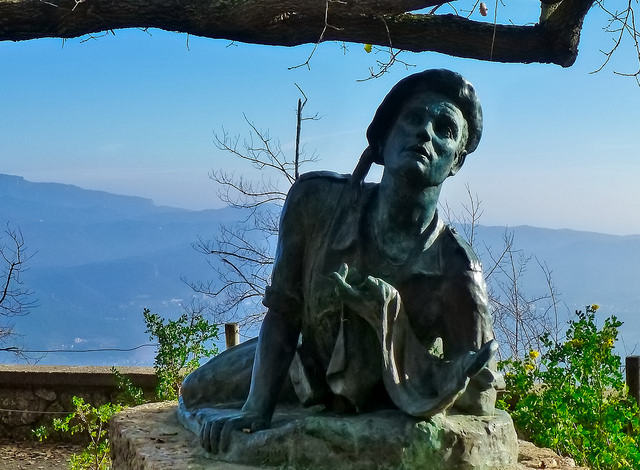 The Old Man and the Sea

This hauntingly beautiful tale was published in 1952 and was greeted with great acclaim. It won the Pulitzer Prize in 1953 and was followed by the Swedish Academy’s bestowal of the Nobel Prize a year later. 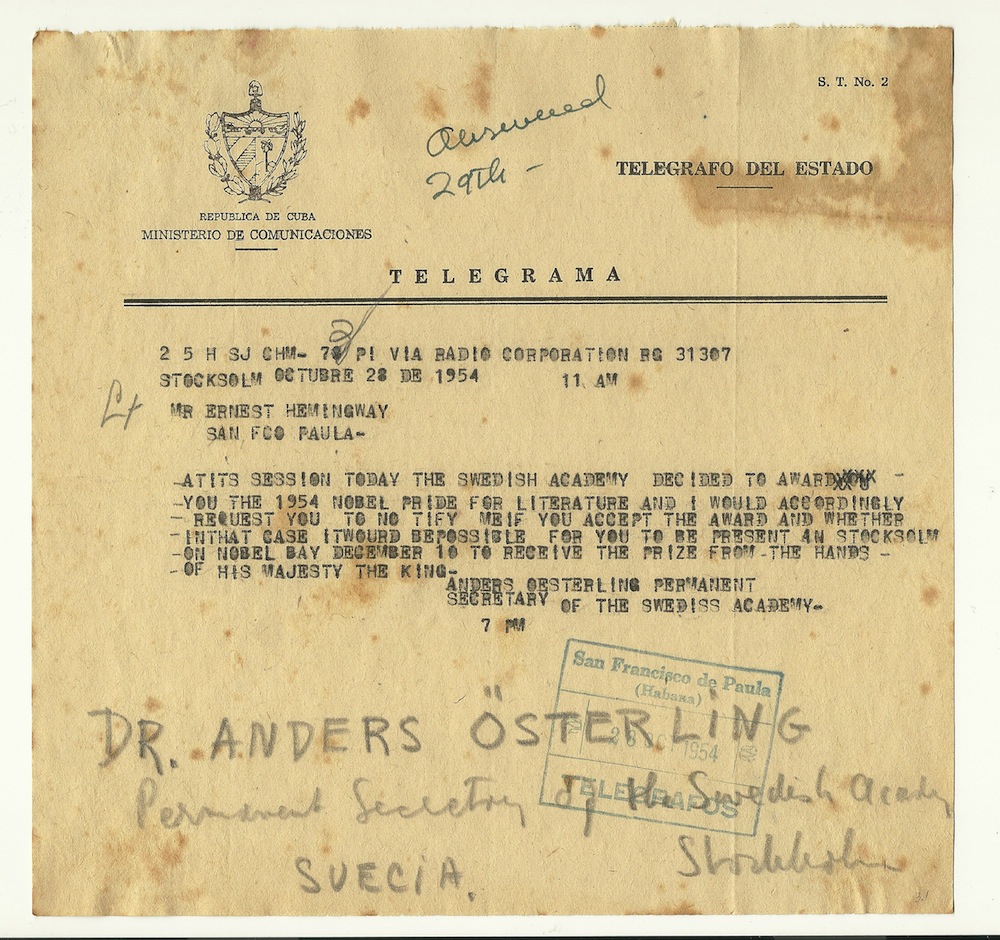 As a fisherman himself, Hemingway gives a knowing description of the tools and techniques of fishing. It is a tale chronicling an elderly Cuban fisherman’s epic contest with an enormous marlin. Across several days and nights, the weary but determined Santiago tracks the hooked creature until he at last claims his catch, which is so big that it must be strapped to the side of his skiff, where it is inexorably attacked and eaten by sharks before the old man can get back to port. 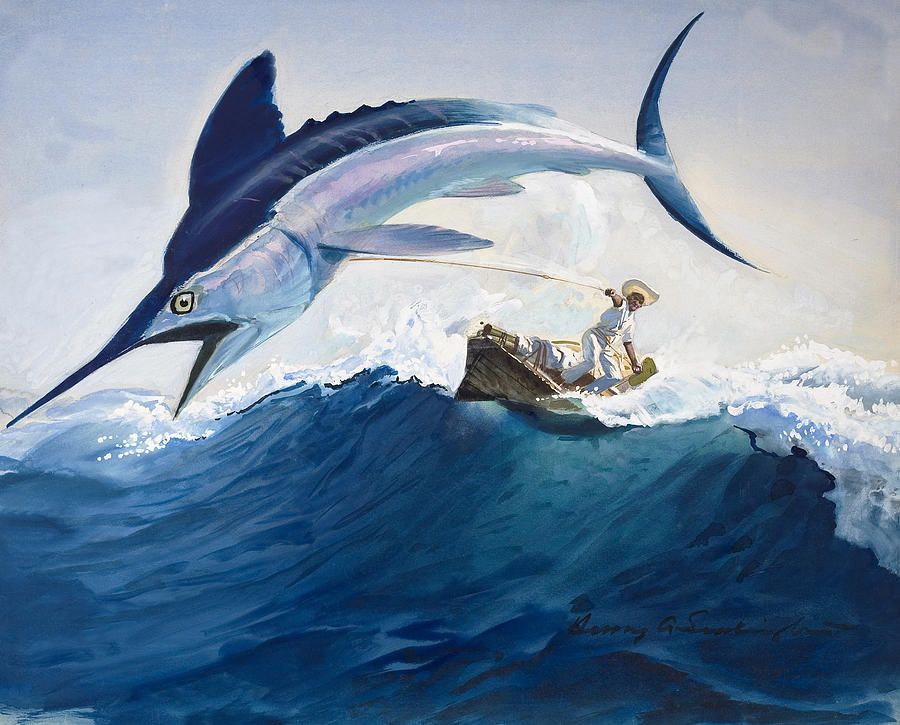 Santiago meets his disappointment with great dignity. The sentiment he expresses as he helplessly watches the sharks destroy his hard-won prize. The immortal line – “A man can be destroyed but not defeated” – has been wildly heralded as the author’s own, the book celebrated for its uplifting message of perseverance. Yet, the tale’s simplicity and fleet forward motion are like a fable-like arc of struggle and symbolism, only masking its ineluctable expression of what Gabriel Garcia Marquez called Hemingway’s one essential theme: “the uselessness of victory.” The book’s sturdy, stalwart, almost ancient eloquence is haunted with echoes of the sure but ineffable truths of tragedy: we sense some profound meaning, but we can’t quite put words to it. The tale outlasts its interpretation, as only the strongest stories can. 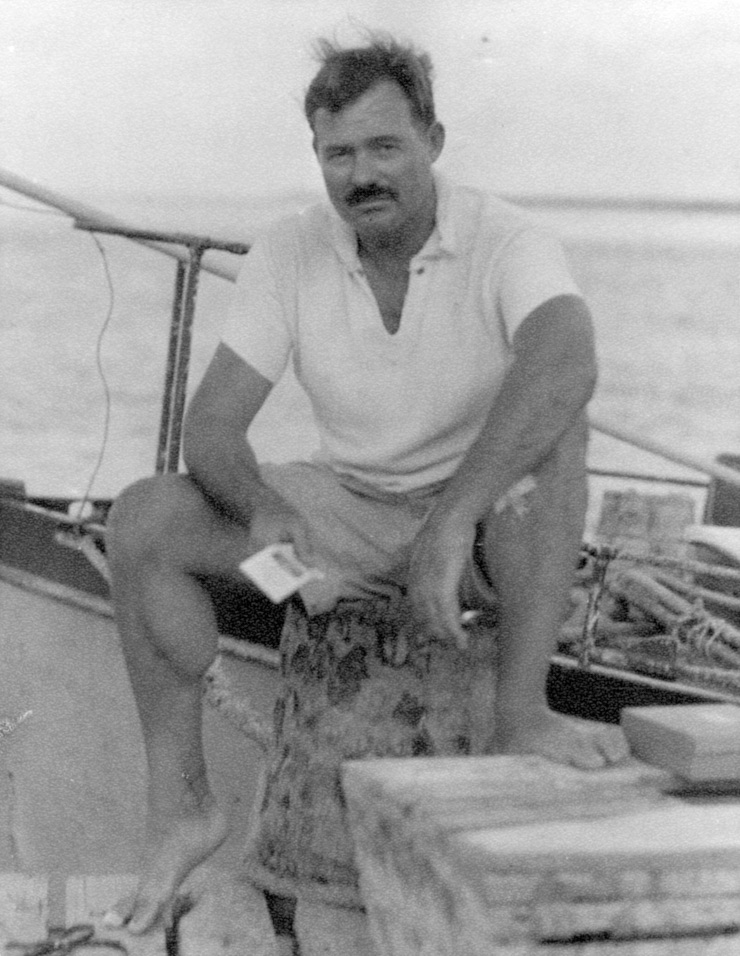 The truths he has to tell are profoundly poetic, and they are diminished by any attempts to paraphrase them.

Another of the greatest writers of the world, William Faulkner commented:

“His best. Time may show it to be the best single piece of any of us, I mean his or my contemporaries.”

Here is a little sample of Hemingway’s masterpiece:

“Fish,” he said, “I love you and respect you very much. But I will kill you dead before this day ends.”

Let us hope so, he thought.

A small bird came toward the skiff from the north. He was a warbler and flying very low over the water. The old man could see that he was very tired.

The bird made the stern of the boat and rested there. Then he flew around the old man’s head and rested on the line where he was more comfortable.

“How old are you?” the old man asked the bird. “Is this your first trip?”

The bird looked at him when he spoke. He was too tired even to examine the line and he teetered on it as his delicate feet gripped it fast.

“It’s steady,” the old man told him. ” It’s too steady. You shouldn’t be that tired after a windless night. What are birds coming to?”

The hawks, he thought, that come out to sea to meet them. But he said nothing of this to the bird who could not understand him anyway and who would learn about the hawks soon enough.

“Take a good rest, small bird,” he said. ” Then go in and take your chance like any man or bird or fish.”

It encouraged him to talk because his back had stiffened in the night and it hurt truly now.” 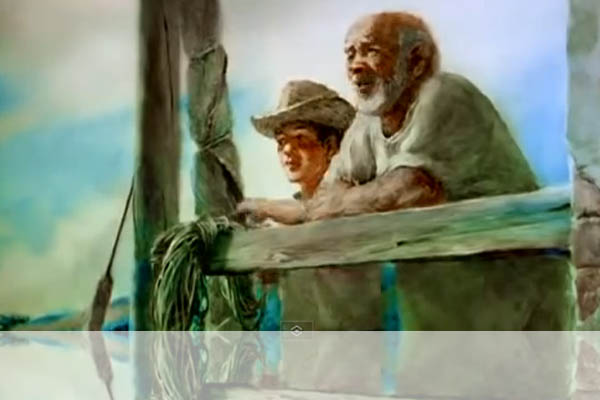 The tale of the friendship between the old fisherman Santiago and the little boy, Manolin, is a story inside the story of the novel and in itself is a masterpiece. 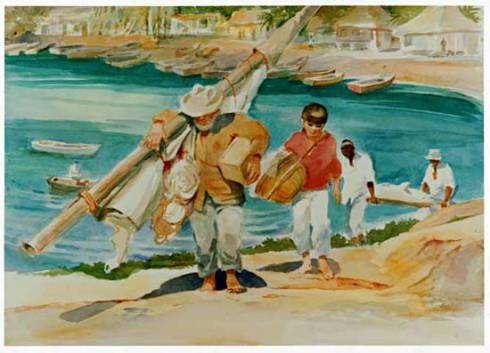 Courtesy of Encore +, the recipient of the Academy Award for Best Short Animated Film in 2000: