“Rest, nature, books, music… such is my idea of happiness”
Leo Tolstoy

“Dawn” from “Winter Songs”  by Ola Gjeilo and 12 ensemble: 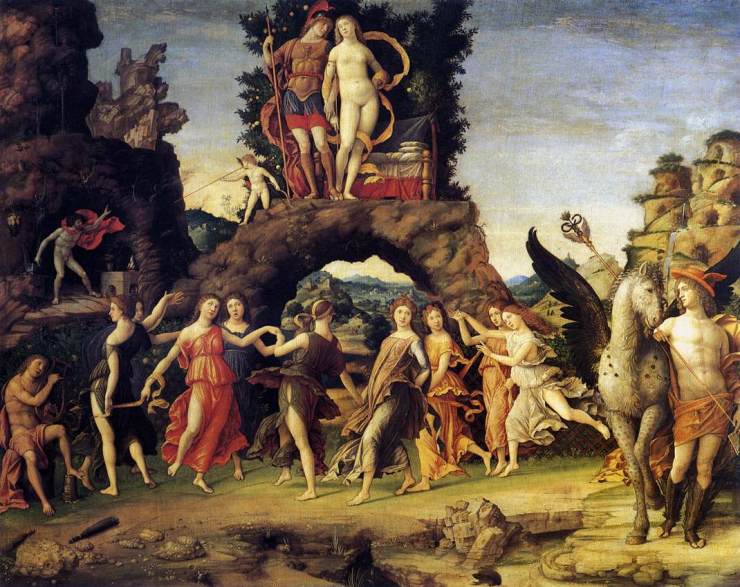 “Echoes in Rain” by Enya (courtesy of Mauro Lucio):

From prehistoric times, nature and humanity have been closely linked. Nomadic tribes and cave dwellers depended on the world around them. They danced to bring on rain or chanted to appease the wind, the sun, and forests. The ancient Egyptians played many instruments – drums, rattles, castanets, bells, and sistrum, in their worshipful rituals. In ancient Greek mythology, the music Muse, Euterpe (“giver of much delight”), was most respected, as she bestowed her musical ability on Orpheus. When his beloved wife, Eurydice, died suddenly, in desperation he went searching for her to the gates of the Underworld and played his lyre. His mournful singing moved even the gods and he could see his wife again.

Music and creativity in Ancient Greece (courtesy of TED-Ed):

Beethoven –  wrote that he often preferred the company of a tree to that of a man and that his ideas came from his daily walks. Not surprisingly, in his greatly popular Symphony No 6 Pastoral, you can hear the call of a cuckoo. In the second movement, Scene by the Brook, toward the end is a cadenza for woodwind instruments that imitates bird calls. Beethoven helpfully identified the bird species in the score: nightingale (flute) quail (oboe) and cuckoo (two clarinets).

Scene by the Brook (II), Symphony No. 6 by Beethoven (courtesy of Edward):

Mozart‘s favourite place for writing his music was in the open garden with his pet starling on his shoulder, both whistling the notes from his compositions.

Lang Lang explains and plays an excerpt from the Violin Concerto No 17 in G Major:

The inspiration for the book Mozart’s Starling:

Wagner‘s inspiration came from his walks in the Swiss Alps.

The list of the great composers inspired by nature’s beauty is long but here are some other examples:

Delibes – the immensely popular ‘Flower Duet’ from Lakmé is about Lakmé and her servant Mallika singing as they gather flowers by a river; this presentation is courtesy of gdoremi:

Delius – ‘The walk to the Paradise Garden’ from ‘A Village Romeo and Juliet’ was written as an orchestral interlude.

Mendelssohn – Hebrides Overture (Fingal’s Cave) was created after his walks in the Scottish countryside.

Often regarded as the first “impressionist” composer, Debussy’s music was frequently inspired by nature. He wrote “There is nothing more musical than a sunset.” in the French publication Musica in 1903. “He who feels what he sees,” continued the pioneering composer, “will find no more beautiful example of development in all that book which, alas, musicians read but too little — the book of Nature.” 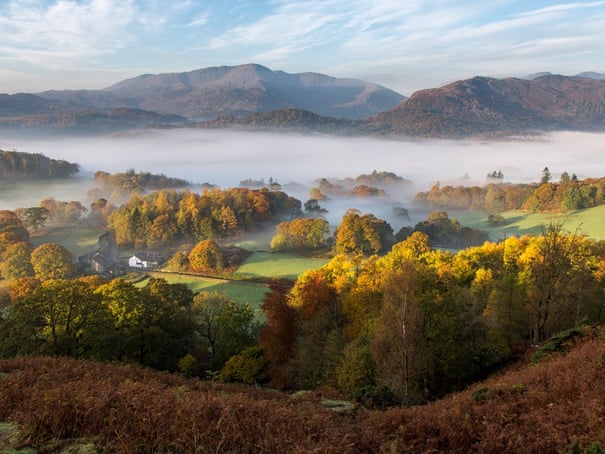 Bizet – An aria in his opera Carmen includes the lyrics: ‘The flower that you had thrown me, I kept with me in prison… I became intoxicated by its fragrance.’

Borodin –  wrote in his song ‘From my tears sprang flowers’; ‘Many blooming flowers spring forth from my tears, and my singing becomes joined with the chorus of the nightingales.’

Howells – he wrote a Christmas carol with the lyrics about the animals in the stable taken from the anonymous-century text.

Puccini – created the beautiful string quartet piece ‘Crisantemi’, inspired by the flowers Chrysanthemums. This was featured in my post “Do Plants Have Intelligence?”

Tchaikovsky – In his greatly popular ballet The Nutcracker there is a Waltz of the Flowers. A string of beautiful flowers performs a dance. 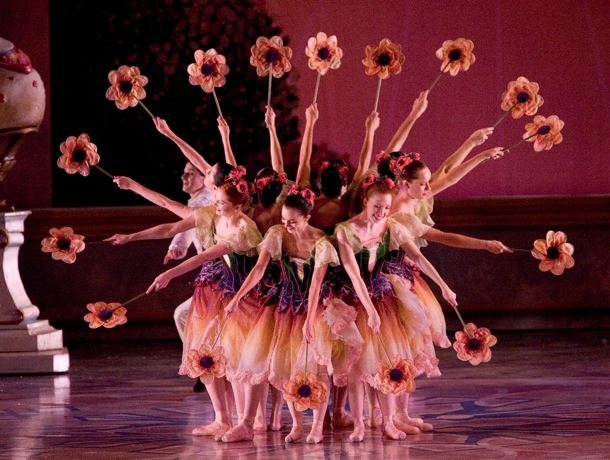 Vivaldi – the universally loved ‘Four Seasons’ has bird calls in ‘Spring’, and a swarm of wasps in ‘Summer’.

Saint-Saëns – his cello solo ‘The Swan’ from The Carnival of Animals, was created for the ballerina Anna Pavlova. Here performed by Yo-Yo Ma and Kathryn Stott:

Debussy – his famous ‘La Mer’ was created to global acclaim and was recorded by many orchestras. Charles Trenet composed an even more famous piece of music, a song recorded by many top singers, all praising the beauty of the sea.

This version is performed by Chantal Chamberland (courtesy of Gerda Kersseboom); 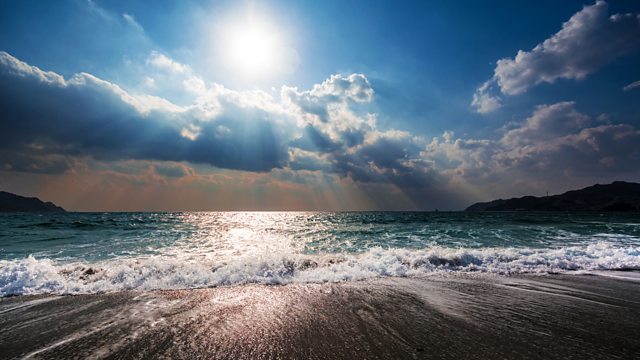 Joseph Kosma – was the composer behind the very much loved ‘Autumn Leaves’, a haunting, heartrending melody; this was featured in my post “Ode to Autumn.”

Schubert – composed one of the most well-loved songs ‘Die Forelle’. It was performed by many soloists, among them Elizabeth Schwarzkopf. I love this song with a passion because you can just ‘see’ and hear the happy trout splashing in the stream. I also won a book prize for knowing all about this song during a quiz at a school concert. I still have this book with a dedication on the front page.

“Die Forelle” (The Trout) by Schubert (courtesy of Yury Revich):

Delacroix the painter wrote about Chopin‘s music: ‘It mingles with the songs of the nightingales and the scent of roses.’

There is a multitude of interesting facts connected with music. I include here a few. The Greek Muses gave the name to the word museum.

In 1797 in Langelsheim (Germany) a baby boy was born into a poor family. One of twelve children, he was baptised as Heinrich Engelhard Steinweg. During the preparations for the battle at Waterloo, Private Stenweg found a few bits of wood and some wire, and build a lyre and played it to raise the morale of his comrades. Forty years later he emigrated to the United States with his wife and seven of his nine children. After changing his name to Henry E. Steinway, he founded in 1853 a piano-making factory. This was the birth of Steinway, the best piano in the world. I understood why when I watched a tour of the Steinway factory in a fairly recent documentary. The attention to detail of all the craftsmen working there was unprecedented in our time.

The Making of a Steinway (courtesy of Steinway & Sons): 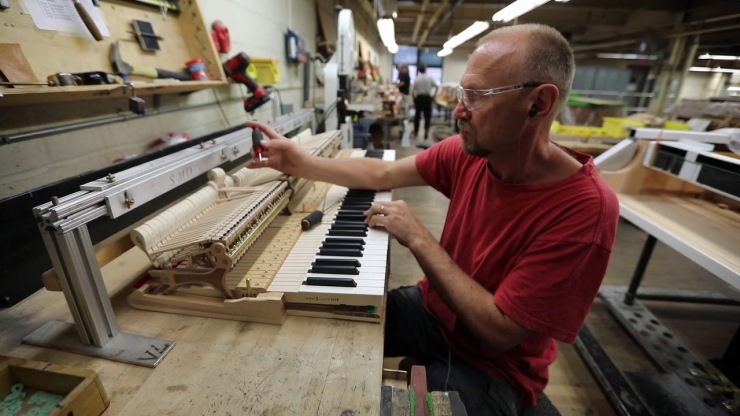 “The Heart Asks Pleasure First / The Promise” (Edit) by Michael Nyman from the film “The Piano” (courtesy of Michael Nyman – Topic):

The emergence of concert halls brought virtuoso piano players to the fore. One of many eccentric players was Henri Herz who before the concert would assure his American audience that he was indeed a virtuoso piano player. He was known for his spectacular settings at the concert halls. In one he stated that there were 1000 candles illuminating the concert hall. One man instead of listening to the music counted all the candles and on finding that there were ‘only’ 992, got up and loudly demanded his money back. This made Herz even more popular among the public.

Soon America started sending their own virtuoso piano players to Europe. One of them was Léopold de Meyer, who while talented had somewhat odd habits. Before the beginning of his concert, he would sit among the public. When the moment came when he should be already sitting at the piano, he would run forward among the chairs, and then with a huge jump would land on the podium. After taking his morning coat off, and inviting the audience to do the same, he would light a cigar and then proceed to play. When he finished his program, he would continue to impress the audience by doing imitations on the piano of bell ringing, and loud cattle mooing, all this by banging the piano with his fists, elbows and even his nose.

Interesting was the career of the famous pianist Liszt. He was worshipped to the point that after a concert the horses of his carriage were taken away so the crowd could pull ‘chosen by the gods’ to the hotel. This was interrupted on the way by hysterical women who tried to pull out at least a few hairs from his head; while some were fainting, others would race home to write Liszt letters professing their undying love and a desire to throw themselves under his feet in supplication. 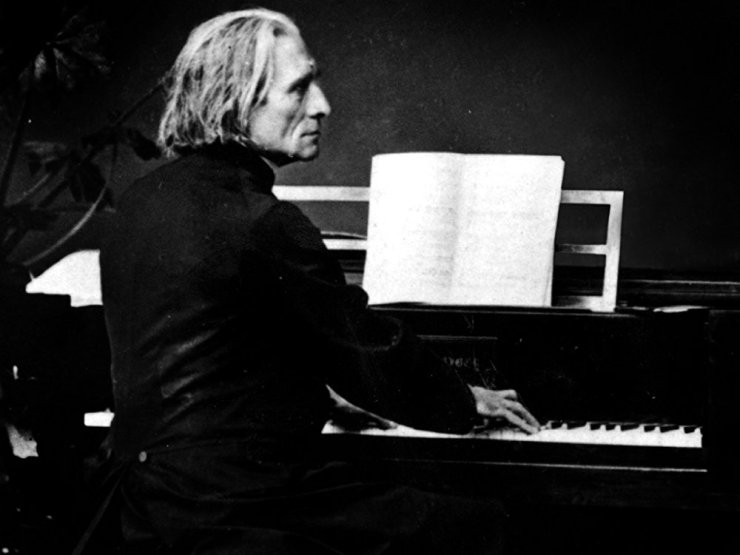 A mini-biography of Liszt (courtesy of Biography):

Liebestraum No. 3 by Liszt, performed by Lang Lang on Steinway & Sons Spirio:

Liszt’s main rival Thalberg made so much money that he retired earlier and bought land and a mansion in Italy and for the next 15 years grew vineyards for wine. His mansion was stuffed with exquisite carpets, priceless objects of art, and the best furniture. The only piece of furniture missing was a piano.

When Rachmaninov was asked who is the best pianist in the world, he replied: ‘ There is Josef Hofmann’. Who? You may well ask. The pianist Josef Hofmann (1876 – 1957) was born near Krakow in Poland. His father was a composer, conductor, and professor of piano at a Conservatory. It is not surprising that young Josef learned to play the piano at three years old. At eight he was playing to spellbound audiences. As a young man, he was not only a virtuoso piano player but a composer and a prolific inventor. He was referred to as ‘twice the Genius’, and had over 70 patents. They included the invention of windscreen wipers, based on the pendulous movement of the metronome. The Ford car company began mass production of windscreen wipers. Among his other numerous patents, there are pneumatic shock absorbers for cars and aeroplanes, proto-GPS and a solution decreasing the resistive drag of piano keys, still used in Steinway pianos. It was his idea for the well-known spiral-shaped heater for boiling water, an electric clock, and even the motorboat. He spent most of his life in America and is regarded as a Polish American pianist. 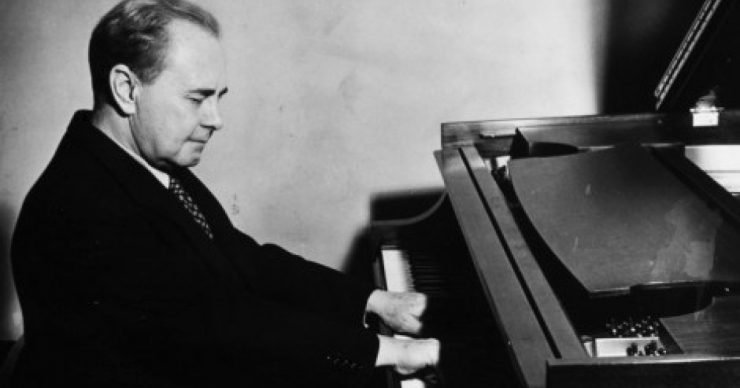 I am running out of space and have to stop now but with one last thought – isn’t life in all its glory and diversity – unmissable and beautiful?

Beautiful nature around the world (courtesy of Annemieke van Leeuwen):

The beauty of planet Earth (courtesy of legolasdk):

How Music Can Plant Trees (courtesy of TreeSisters):

46 thoughts on “Nature, the Great Composers, and Other Fascinating Stories”