All my life through, the new sights of Nature made me rejoice like a child.
Marie Curie

Those who contemplate the beauty of the earth
find reserves of strength that will endure as long as life lasts.
Rachel Carson

Apricots and Dried Apricots are recognised as significantly lowering the risk of cancers related to smoking, and also supporting a long life. In the Himalayan kingdom of Hunza, apricots are cherished and eaten in large quantities because they are regarded as a source of health and exceptional longevity. 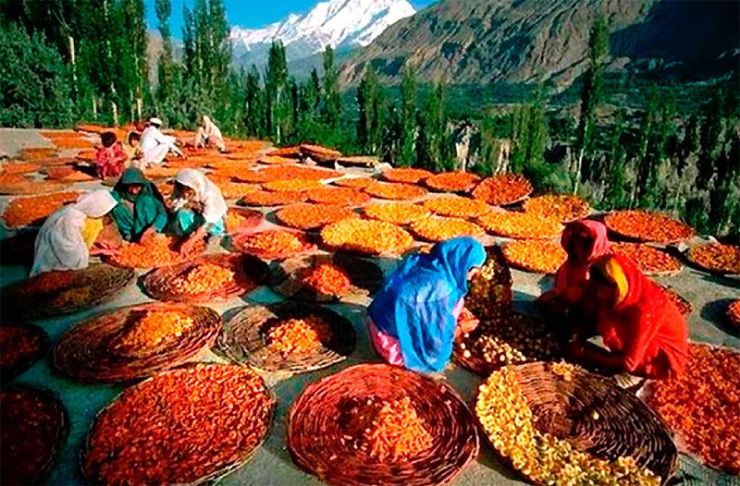 The life of an apricot in the high mountains!

The spectacular landscape of the Hunza region from above:

Larghetto from Piano Concerto No. 2 in F Minor by Chopin, played by Tzvi Erez:

The same beliefs in the power of apricots are known in certain parts of Bulgaria where people casually chew softly dried apricots, in the way some people use chewing gum but without the benefit of exceptional longevity given to apricot lovers. My own GP had a large supply of dried apricots in the drawer of his desk and lived a long, healthy life.  The reason for apricot’s power is the highly concentrated amount of beta-carotene, a form of vitamin A.  For maximum benefit, eating dried apricots is much better as they have a much higher concentration of beta-carotene. My own personal recommendation would be soft dried organic apricots that don’t contain sulphur.

Two delicious recipes that make use of this ambrosial fruit:

Peas – When scientists noticed that the population of Tibet had stayed stable for a few hundred years, they discovered that the Tibetans eat large quantities of peas which are well-known to contain an antifertility agent. Peas also lower blood cholesterol, prevent appendicitis, and since they are rich in soluble fiber, they inhibit certain viruses and chemical carcinogens in the intestines.  On top of that, they taste wonderful and look colourful on the plate. 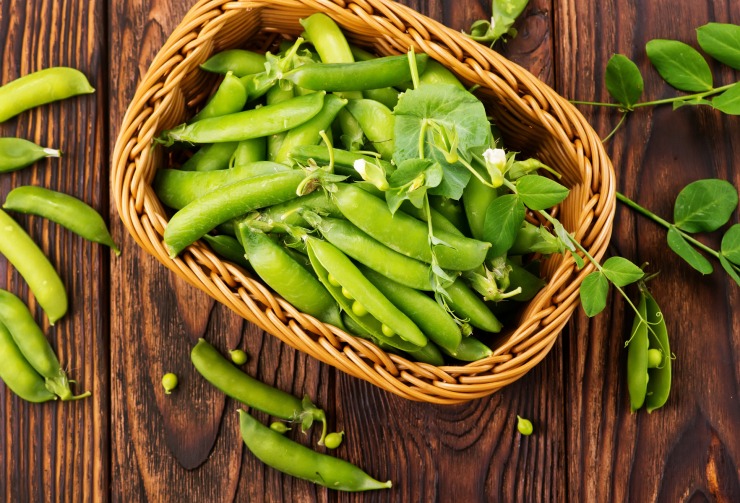 A time-lapse video of a growing pea:

The Story of Peas & Yaks (courtesy of India in Motion):

Cranberries have been well known for a hundred years as a powerful aid in fighting infections of the urinary tract, bladder, and kidneys. Cranberries kill viruses and bacteria, deodorize urine and prevent kidney stones. The reason is that eating cranberries or drinking the berries’ juice increase the urine’s acidity, especially hippuric acid that kills the bacteria. Cranberries’ agents have a unique ability to survive digestion and end up in urine intact. They prevent the bacteria from attaching to the walls of the urinary tract and they are harmlessly washed away, and that is what prevents an infection. Cranberries act as a natural, plant-based antibiotic, in a similar way that a garlic and onion diet does. Anthropologists found a remarkably low rate of infection in the skeletons of the pyramid builders due to such a diet. Scientists established sixty different chemicals with antibacterial agents that are present in plant-based foods. Among them are apples, chili peppers, honey, garlic, onions, tea, yogurt, and radishes. It is important to say that cranberries are excellent in preventing or acting during the very early stages of urinary tract infection. If the infection is advanced, the only way to deal with is to use antibiotics.

Lemons and limes were regarded for centuries as the most valuable of all fruits.  They saved the lives of countless seamen who had to sail for months across the oceans without any fresh fruits or vegetables. Without lemons and the vitamin C that they contain in high doses, they would have suffered from potentially fatal scurvy. This is a dreadful disease that causes muscles to waste away, gums to bleed, and wounds not to heal.

A Nobel Prize winner, Linus Pauling, firmly believed that eating lemon or drinking lemon juice every day could prevent cancer and prolong life. Sadly this could not be fully proven in many scientific studies. But we know now that lemons and limes prevent the development of cholera, peptic ulcers,  cancer of the mouth, skin, lungs, breast, and colon, stroke and scurvy. Lemon is often used as relief for a sore throat, mixed with honey in a glass of warm water. In many countries drinking a glass of water with lemon, first thing in the morning, is regarded as an invigorating tonic.

A simple but delicious recipe for Fettucine al Limone from Positano, to enjoy perhaps on a summer’s evening:

Strawberries – In cancer research, it was established that those people who ate regularly strawberries were three times less likely to develop cancer compared with those who didn’t eat any. They are found to contain a very high level of the super fibre, pectin which significantly reduces blood cholesterol. Scientists also found that strawberries are able to block the formation of the most potent of all cancer-causing agents, nitrosamines which can form in the intestines when the chemicals nitrite and amines react with each other. Strawberries are also antioxidants. They are good for the skin, act as a diuretic and an astringent. Strawberries and cream, anyone? 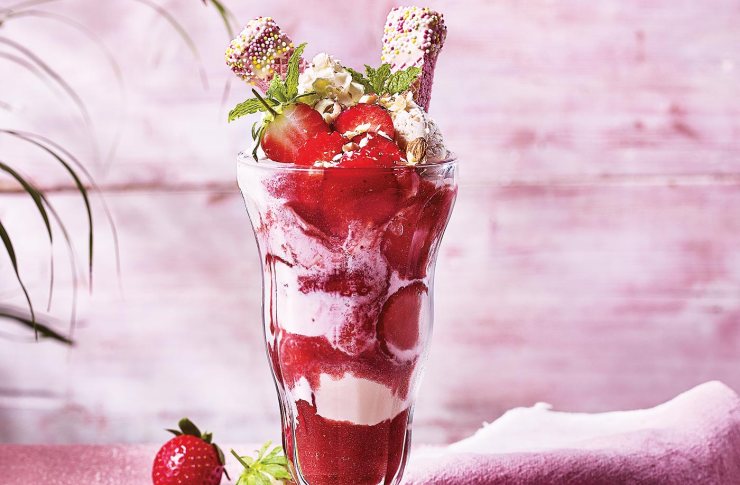 The nearest thing to picking your own:

Salt – All living creatures need sodium found in salt.  Common table salt is sodium chloride, and it is a crystalline compound. It is used as a food preservative and as an essential seasoning. Sodium is part of the stars and the sun and the earth’s crust. It is an element found in many rocks and many types of soil. As sodium is very similar in appearance to potassium, it was often regarded as the same substance. Both are classified as soft metals but naturally are found only as a result of their association with other elements; in the case of sodium, as sodium chloride or table salt.

The use of salt goes back to ancient times. The Egyptians used sodium for making glass and for the preservation of the dead through mummification, using a crystalline mixture of sodium bicarbonate, sodium sulphate, and other compounds. The wealth of many countries was built on salt mining and selling this precious commodity to those who didn’t have it. Salt was valued as important as gold. A slave that was not working well enough in his master’s eyes was put up for sale as ‘not worth his salt’.  Salt was used in some places as a currency and was a cause of many wars. Today, salt is used in many industries as it is an extremely active agent.  In England, one third of salt excavated from rock salt is used for de-icing the roads in winter. In cooking salt acts as a binder, a flavour enhancer, especially sweetness in chocolate and ice cream. It is used in curing meats and fermentation of vegetables. As it is included in everything, it is highly advisable to add very little to cooking, as less is more healthy than more. Still, it is an exceptional chemical and those of us, regarded as decent and respectable, and who didn’t benefit from being high born, are referred to as ‘salt of the earth’. Praise indeed. 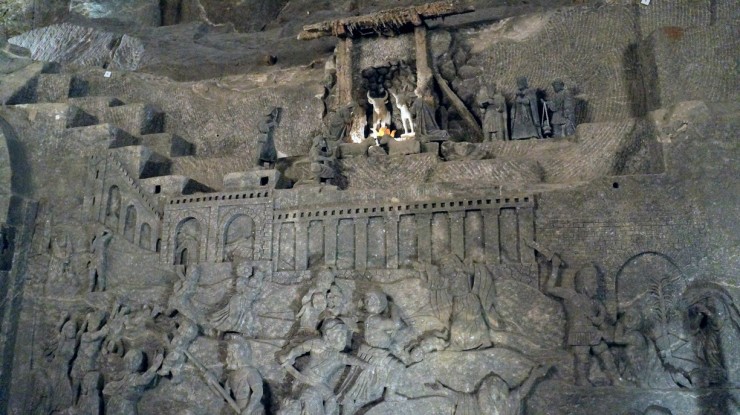 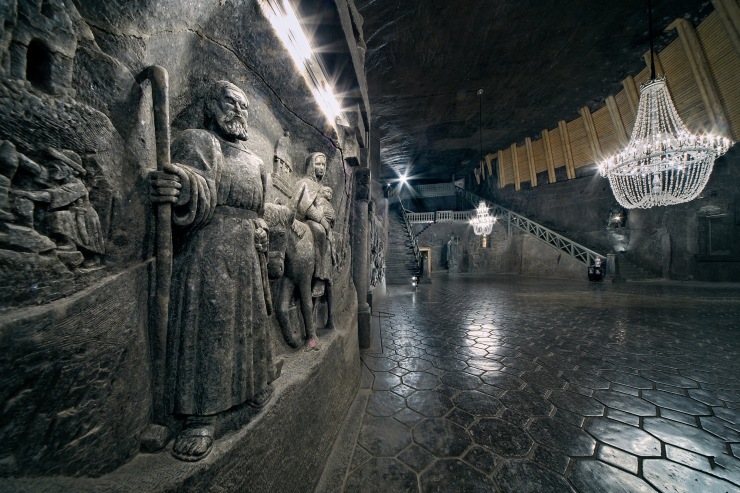 Above the salt mine in Wieliczka, Poland. Everything you see was sculpted by the miners from salt.