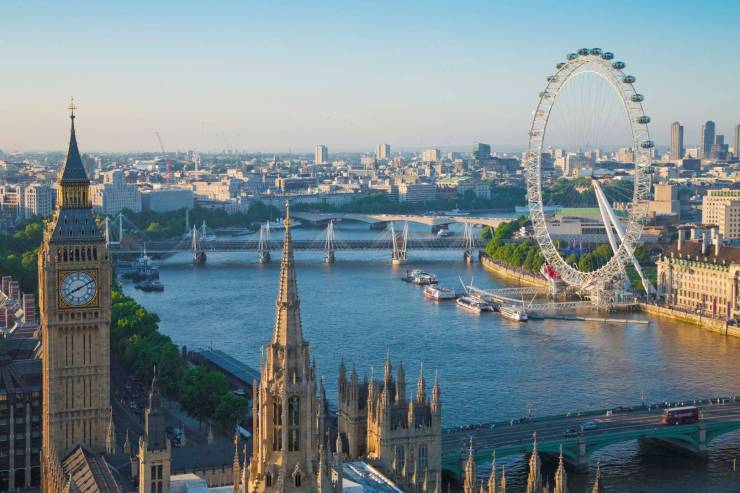 In this part of the Thames series, I want to show the interesting places in London that should be on every visitor’s list while planning to come here. This time it isn’t architecture or philanthropy but places that are worth seeing. Always remember that there wouldn’t be London and all the magnificent places to see if it was not for one of the greatest rivers in the world, the Thames.

When I was working at Charing Cross Road, my lunchtime break would start in the Italian delicatessen, just down the road from my workplace. I can still recall the wonderful smell of the myriad of hams, prosciutto, sausages and cheeses displayed or hanging above the dark wooden counters. Anything Italian was filling the shelves, but the pasta had the pride of place.

You just have to wonder at the sense of poetic romance of Italian pasta makers who created the names of seemingly ordinary food to sound like sublime poetry, especially when said with an Italian sing-song accent.

Above is Pappardelle with Mushroom Ragout

They were amongst the first businesses to pioneer importing fresh Italian products into the UK. Originally the family catered for the local Italian community and as demand for authentic traditional food grew, so did the business.

This means that more than 98% of their products are imported exclusively from small artisan producers such as their oldest suppliers, Martelli Pasta from Lari in Tuscany and Frutti Bosco, a small co-operative in the Camisa’s family village of origin, Tarsogno, 3000 feet up in the Apennine mountains of Northern Italy. But I digress…..

After a crisp baguette filled with Gorgonzola cheese, lettuce and vine tomatoes, where would you go but to a coffee shop. The best and the nearest would be – 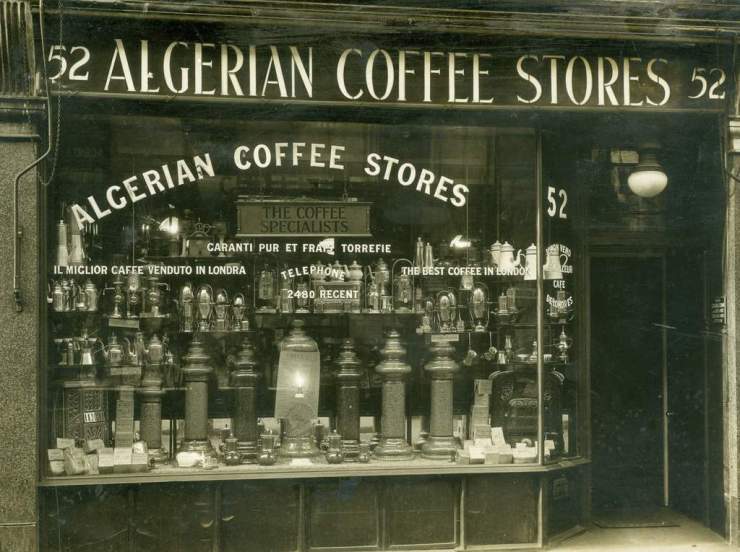 A great city like London, can be measured not only by its architecture but by the quality and extent of its historic shops and cafes which combine to confer a very distinctive sense of place. The Algerian Coffee Stores is one of those delightful specialist shops that make London such a rich and diverse world city.

Established in 1887, the shop has a distinctive pillar-box red front, with many of the original late 19th century fittings inside, including a mahogany counter, display cases and shelves. 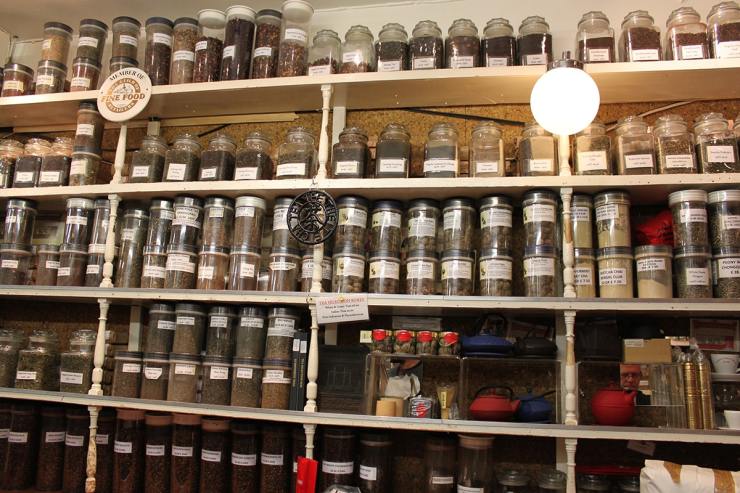 The shop is filled with the wonderfully pungent aromas of over 80 different coffees from across the globe and more than 120 exotic teas with wildly romantic names – Silver Snail, Rose Congou, and best of all, Dragon’s Whiskers.

We are now aware that we must protect such historic shops for the benefit of future generations.

Anyone interested in sampling a typical London native’s fare should visit two places of note: 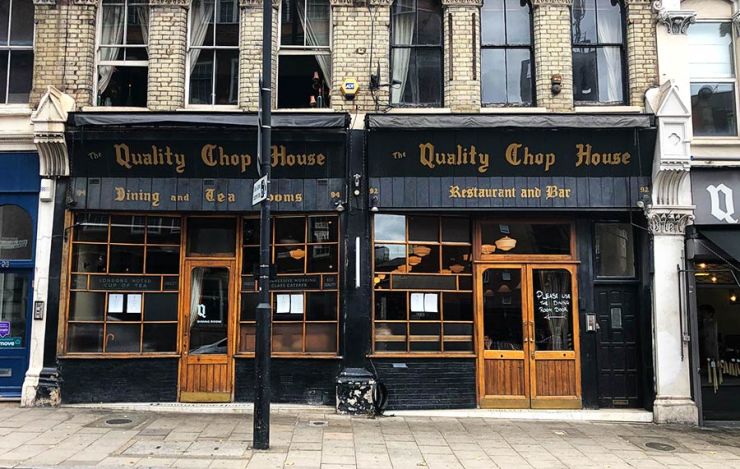 The Quality Chop House is a miraculous survival of an early 20th century working-class restaurant of a type which was once popular in London. Outside, the shopfront has central three light strips proclaiming “Quick Service”, “London’s Noted Cup of Tea”, “Civility, Snacks”, “Progressive Working Class Caterer” and “Best Quality”. 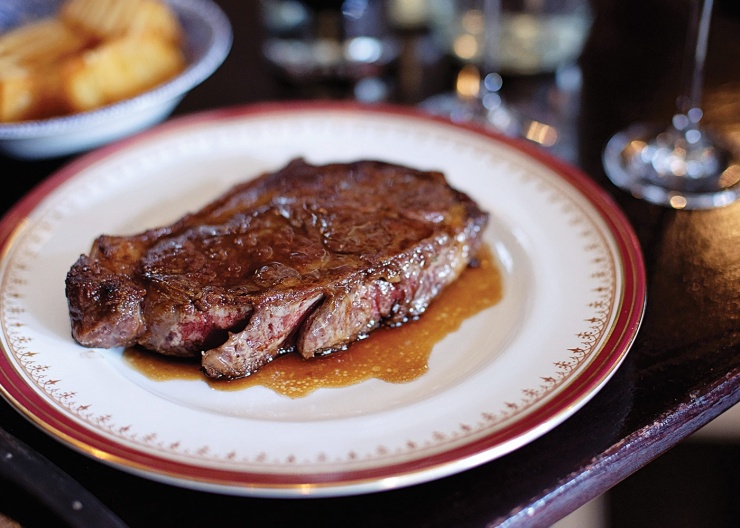 The interior is quite remarkable with nine bays of oak benches and tables with cast-iron legs set in two lines around a central aisle. Around the walls is simple linen-fold panelling with shelf brackets, a frieze of steleorite decorative tin panels and a pendant central gasolier. At the rear the kitchen is reached through an oak screen with a carved door and sliding glazed hatch. 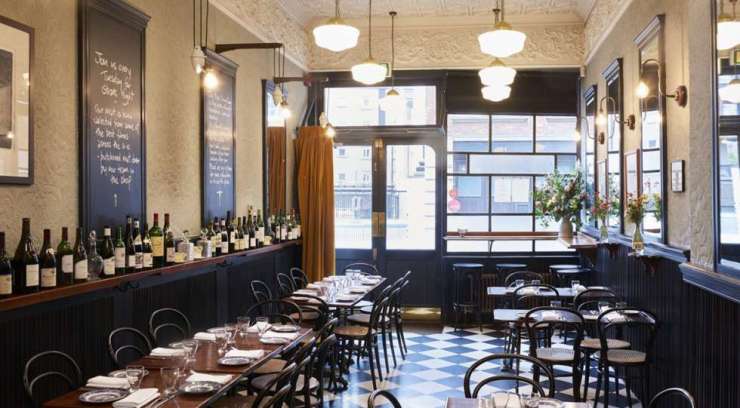 Jellied eel, pie and mash shops are unique to London. They were started by a small number of families, the Cookes, the Manzes, and the Burroughs, all of whom subsequently intermarried

The Manze family was among the second wave of Italian immigrants who arrived in Britain in the late 19th century and who grew to specialise in popular catering. Michele Manze arrived from Ravello in southern Italy at the age of three in 1878. The family settled in London, making living as ice merchants and ice-cream makers. Recognising the need for cheap, nutritious meals catering for the working classes, Michele Manze set up a chain of eel, pie and mash shops. The first shop, established in 1902, still survives. Thirty years later there were 14 shops bearing the Manze name.

This is a superb survival of an early 19th-century working-class restaurant. The terrazzo floors are strewn with sawdust. At the entrance is a long marble-topped counter complete with the original cash register. 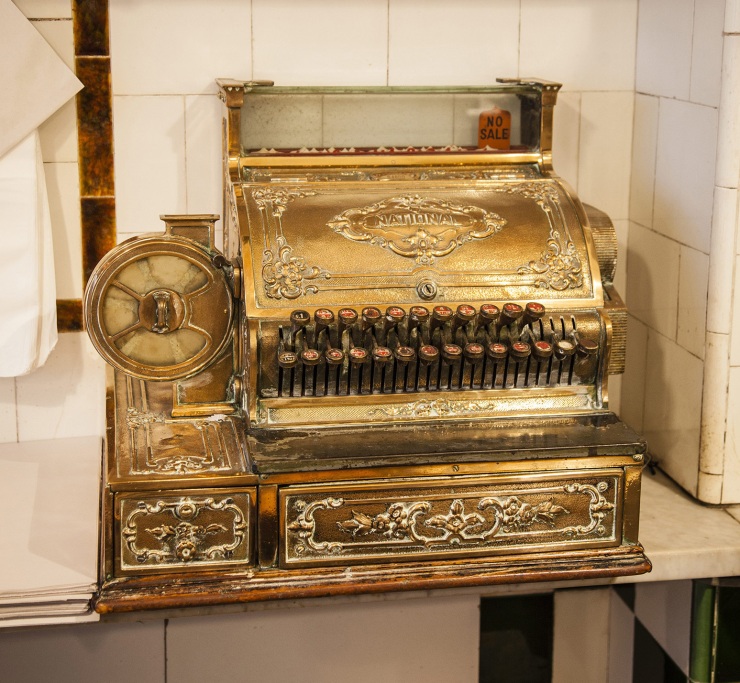 The walls are lined throughout with white ceramic tiles with a dark green and white tiled chequerwork dado divided by rectangular brown edge-tiled panels containing mirrors. A tiled frieze of green and brown garlands runs in a continuous ribbon around the top of the walls. Below, the tables are set in bays between the original mahogany benches, lit by two lines of pendant light fittings above.

The historic terrace houses of 18th and 19th century London are very adaptable to accommodate many different uses. As a result, many light and craft workshops in central London can still be found in what were once elegant Georgian and Regency houses.

W Sitch & Co, art metal and lighting specialists, is a wonderfully atmospheric example. Founded in 1776, the year of the Declaration of American Independence, it has been located in a 19th-century townhouse in Soho and specialises in restoration, renovation, and replication of historic lighting and fittings from any period. 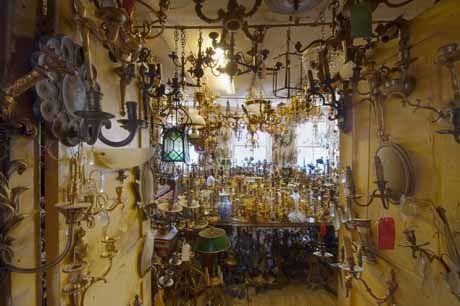 Every surface of the interior of the building is crammed with light fittings, lamps, and specialist metalwork. A fine early 18th-century staircase with turned balusters and ancient timber treads worn smooth by the passage of time leads to a veritable treasure trove. The upper floors are lined with a surreal array of sconces, wall lights, chandeliers, lanterns, lamps, and candelabra in a plethora of designs and styles. At the rear is a fully operational workshop and forge for the manufacture and polishing of individual artefacts. Among the company’s clients are the National Trust, English Heritage, and 10 Downing Street.

This is an ideal place to pick up something special to take back home. 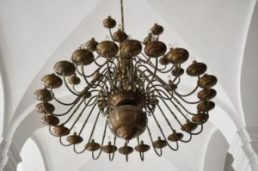 Seeing how many moving memorials to beloved pets there are in London, reminded me about an especially touching story reported recently in the press. When Lucy Ledgeway’s beloved Jack Russell terrier, Sunny, passed away at 14 years, she went out to take some fresh air. Through tears, amazed and with great relief, she saw in the clouds above the face of Sunny. It was a message that he was going to be with her in spirit. 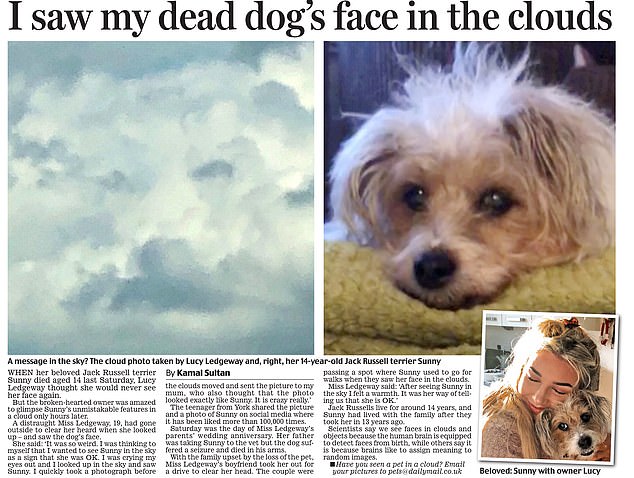 Bel Mooney, a renowned columnist on a national paper, wrote about her own spiritual experience, after reading about Lucy and Sunny. When her much loved dog Bonnie passed away, she could feel her presence around the house, and resting at her back, in the way Bonnie used to rest while Bel was working. Now when she feels this presence, she says ‘I know you are there, Bonnie, but I will not look behind me because I know I won’t see you.’ 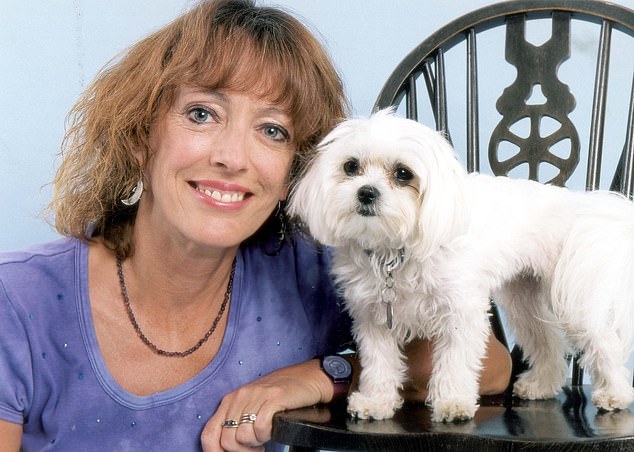 Hidden in a corner of  London’s Hyde Park there is a pet cemetery. It is protected and you have to pay a fee to go in, but interesting nevertheless. 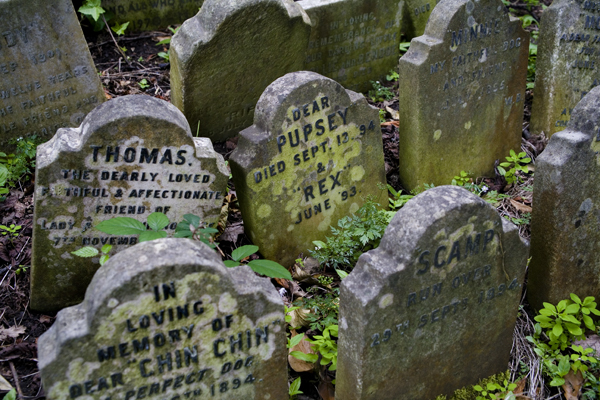 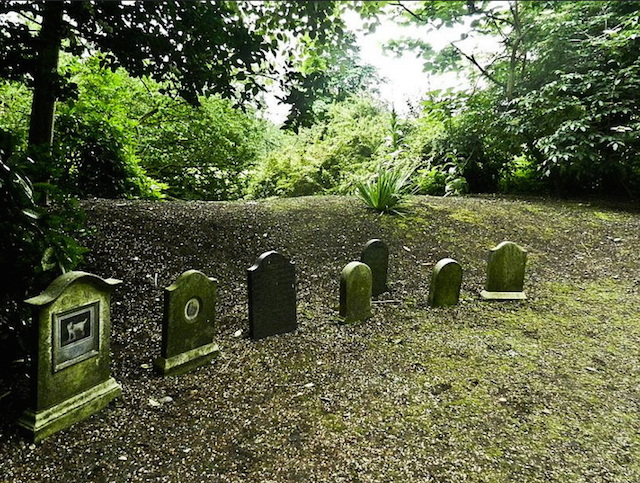 Dr Samuel Johnson, a famous lexicographer, had a black cat that he was very fond of; his name was Hodge.  After the cat’s death, the poet Percival Stockdale wrote:

“An Elegy On The Death Of Dr Johnson’s Favourite Cat”

Who, by his Master when caressed
Warmly his gratitude expressed
And never failed to purr
Whene’er he stroked his sable fur.

The statue of Hodge shows the black cat sitting next to a pair of oyster shells atop a copy of  Dr Samuel Johnson’s famous dictionary, with the inscription: ‘A very fine cat indeed.’

It has become customary for visitors that walk past the statue to place coins in the oyster shells as a token of good luck. The quotation ‘a very fine cat indeed’ comes from Boswell’s writing about Dr Johnson addressing his cat in this manner.

On the front of the Thames, at Bermondsey, as a part of a group of sculptures, there is Dr Salter’s cat. 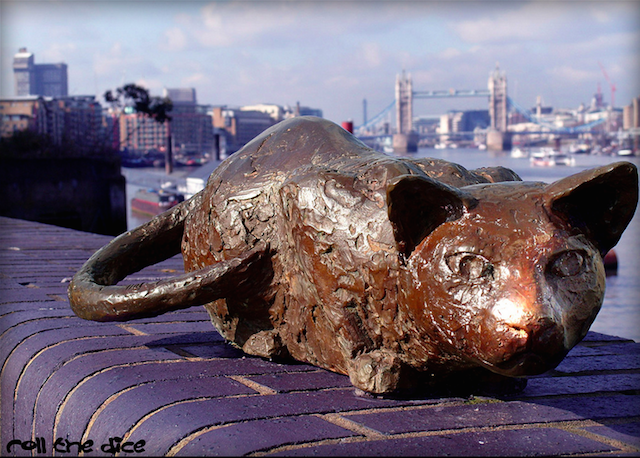 The tomb of boxer Tom Sayers in Highgate west cemetery includes a sculpture of his faithful dog, called Lion.

Also at Highgate cemetery, there are many sculptures of cats that were loving companions to their human friends and are very much missed, for eternity. 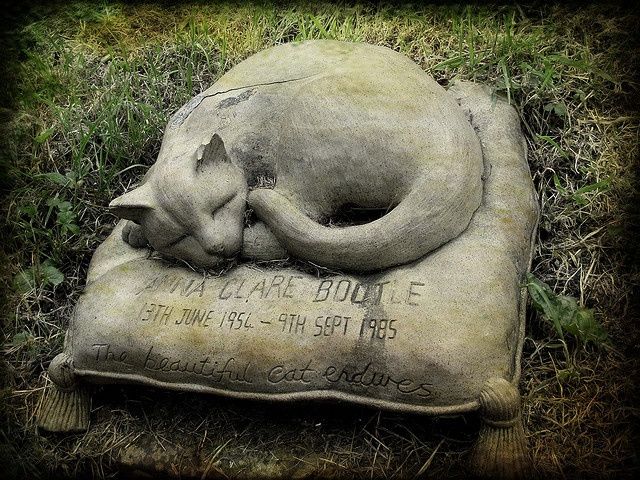 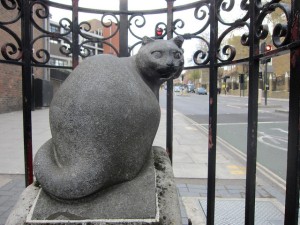 Dick Whittington bought a property at Leadenhall Market in the City, very much worth seeing for its beautiful architecture, hundreds years old. 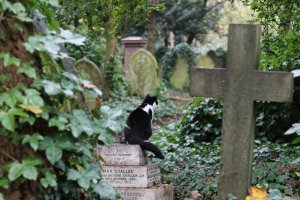 In Piccadilly, central London, there is a memorial to Nipper, the famous dog from the HMV logo. Nipper has a number of memorials all over the country. 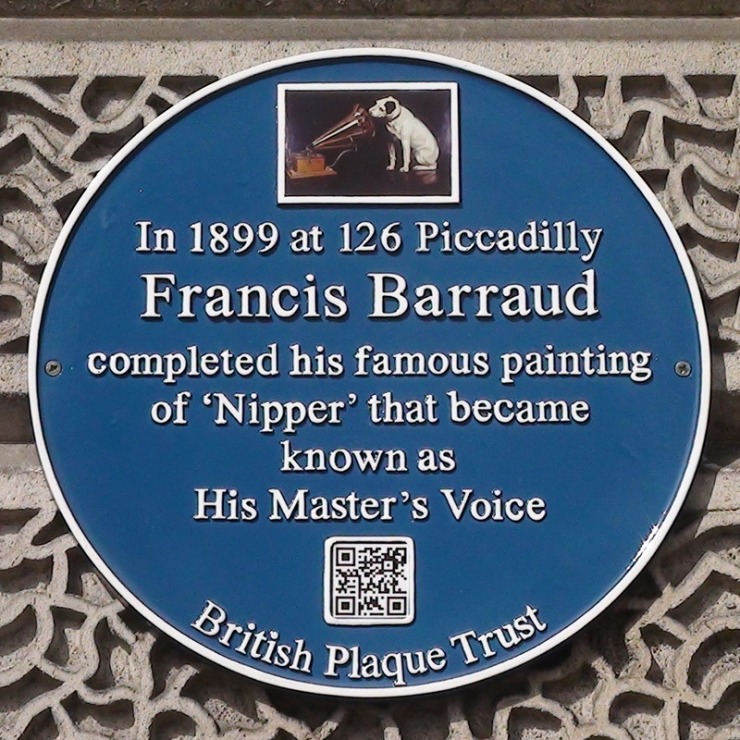 The little-known cat statue stands in a children’s playground in Old Gloucester Street, round the corner from Great Ormond Street. It commemorates Humphrey who lived at nearby Mary Ward House for 18 years. The sculptor, Marcia Solway, died the same year as Humphrey, in 1992.

London’s second most famous Boris is Boris the cat. His plaque can be found in Kentish Town on Anglers Lane; perhaps he was looking for fish.

These two dog memorials hide in a niche within the central courtyard of the Victoria & Albert Museum. One called Jim belonged to Sir Henry Cole, who was instrumental in the founding of the V & A.

The Golden Heart pub in Spitalfields has a plaque on its Commercial Street frontage commemorated to a former pub dog called Gizmo.

Giro was the pet terrier of German ambassador Leopold von Hoesch, and as such is often labelled as a ‘Nazi dog.’ Giro’s political leanings were not recorded. This tacky kennel-shaped memorial is at the top of the Duke of York’s steps leading from The Mall to Carlton House Terrace. 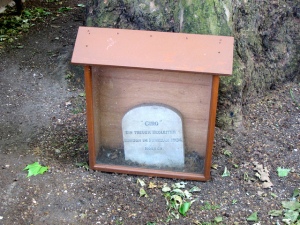 My own experience of an unusual, unique friendship with a wild hedgehog, is documented in a few posts in my blog. Those readers who read it were all enchanted and amazed by his intelligence, self-awareness, and ability to bond with me; as I wrote – ‘like plaster with a wall.’ Gaby’s memorial will be a book about our life together, almost ready, but in the meantime look up the posts. 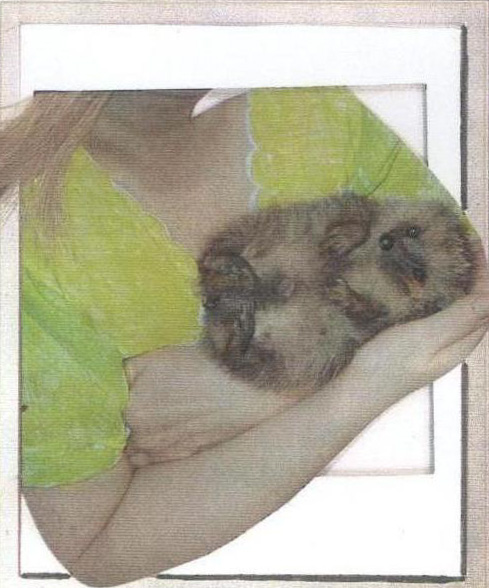 This is the end of the Thames series, although to be able to cover all the interesting places in London, I would have to write every week for at least a year. I hope it gave many readers an incentive to come to London, when possible, and see these special places for themselves.

10 thoughts on “The Great Rivers of the World – The Thames, Part Eight”