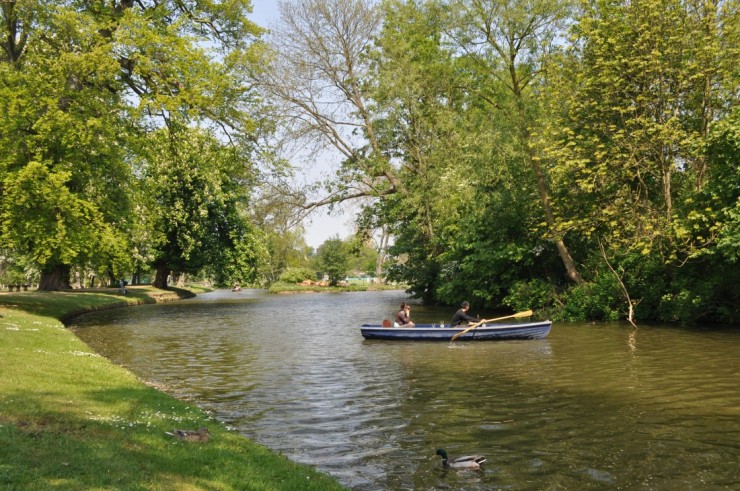 The Thames at Oxford

The Thames is a very special river because it has witnessed so many national and political events, and it has such a world-famous history. The basic facts are: the Thames is 215 miles/346 km long and is the second-longest river in Britain, after the Severn, which is longer by 5 miles. Source  – Thames Head. Mouth – North Sea, Thames Estuary. The Thames runs along the borders of nine English counties and has 134 bridges. Along the Thames’ border are cities – London, Oxford, Henley-on-Thames, Reading, Windsor. 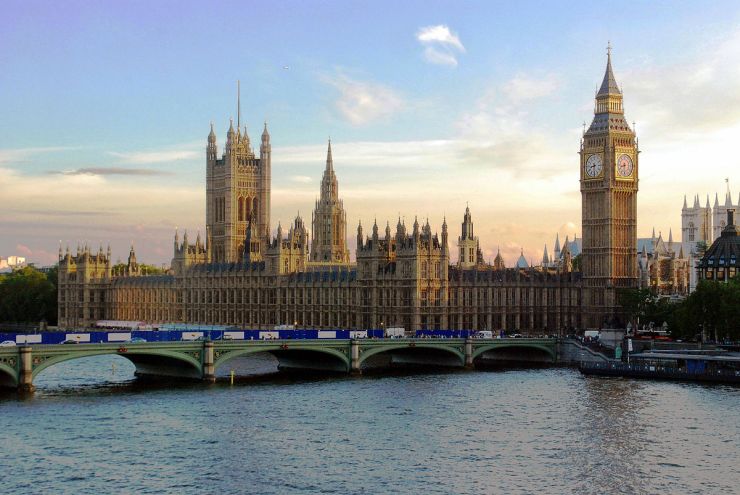 Most of the Thames’ energy ist lost in turbulence and friction. The river flows in loops and it defies the prediction of its direction. As it is, it flows east, then north-west, then west, then south, then north. The difference between high and low tides varies greatly in places. During the Roman occupation, it was a difference of over 3 feet, today in the area of London Bridge, it is between 15 and 22 feet (4.5 and 6.7m). The high tide has risen greatly over a period of two thousand years. The reason is that the south-east coast of England is sinking slowly into the water at the rate of approximately 12 inches (303mm) per century. In 4000 BC the land beside the Thames was 46 feet (14m) higher than it is now, and in 3000 BC it was 31 feet (9.4m) higher. It is expected that this combined with other aspects, predicts that the Thames Barrier will have to be rebuilt to provide adequate protection for London. The Thames has now been controlled by many generations but it is still work in progress. The river has taken the same course for thousands of years after being pushed southward by the glacification of the ice age. Various stretches of the Thames have correspondingly different characters and atmospheres, and its own history. This is why more than one part is needed to cover the Thames’ illustrious history, called also for that reason – the liquid history.

The Thames is a symbol of eternity and an image of the nation. Those who visit this country only need to travel along the Thames’ borders to see picturesque villages, with thatched, picture-postcard cottages, and beautiful gardens, or towns and cities where architecture dates back hundreds of years, like in London, Oxford, Henley-on-Thames or in Windsor. Without the Thames, there would no London or any others. The Thames has been for centuries a source of water, a sewer, a source of power, food, recreation, and a playground – it is a provider of the many necessities of life, and the creator of our civilization. The Thames helped London to grow and prosper, and the river in its magnificence represents Englishness itself. 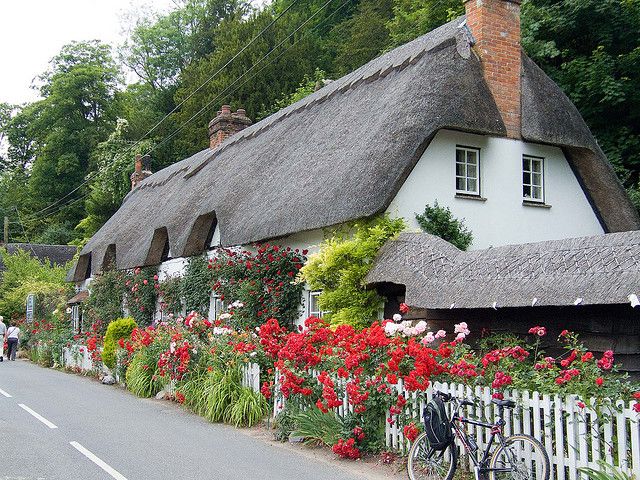 An example of the architecture of Christ Church, Oxford

Anyone planning a visit to the UK in the hopefully near future should include Oxford in their plans. It is a remarkable city as even every pebble, every stone or step is steeped in dramatic history.  The central and most significant part is Oxford University. While there is no clear date of its foundation, teaching existed at Oxford in 1096 and progressed considerably from 1167 after Henry II banned English students from attending the Paris University. The oldest Oxford Colleges are Balliol and Merton. It is a moving experience to look at the steps of the 1000-year-old tower at Broad Street or to touch the sarcophagus of the knight John de Nawers resting for eternity in Christ Church Cathedral, with his faithful dog at his feet, and not to feel emotional at touching history. 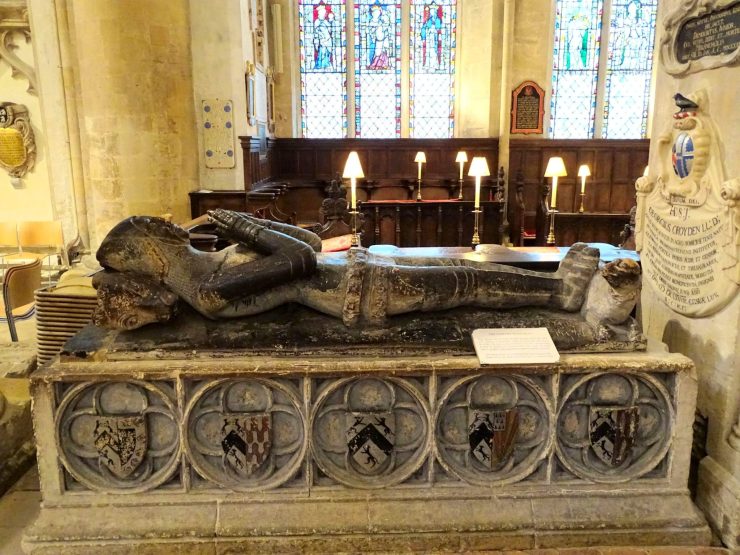 And what a dramatic history! The oldest church in Oxford, St Michael at the North Gate, with the tower built around 1000 years ago, the creation of Christ Church first by Cardinal Wolsey, then remodeled by King Henry VIII after the two fell out, the burning at stakes outside Balliol College of notable clergymen during the Catholic reign of Queen Anne, the taking over the University by King Charles I when he was battling with the Parliamentarian army and stayed in Christ Church, the dreadful times of Cromwell, and later on, the more intellectual times of producing philosophers, writers, poets, and Prime Ministers. In Christ Church Deanery’s garden, there is still the tree under which sat Lewis Carroll with a young daughter of the Dean, when he told her the incredible stories about Alice in Wonderland, now read by millions of children all over the world. It was one of my favourites too, and I read it probably one hundred times. The story of a little girl who followed the white rabbit underground into a magical world of adventures is never out of print and was made several times into films. Lewis Carroll had a malleable attitude towards space and place that was well portrayed on the screen. And that is only a tiny part of Oxford’s unique history. 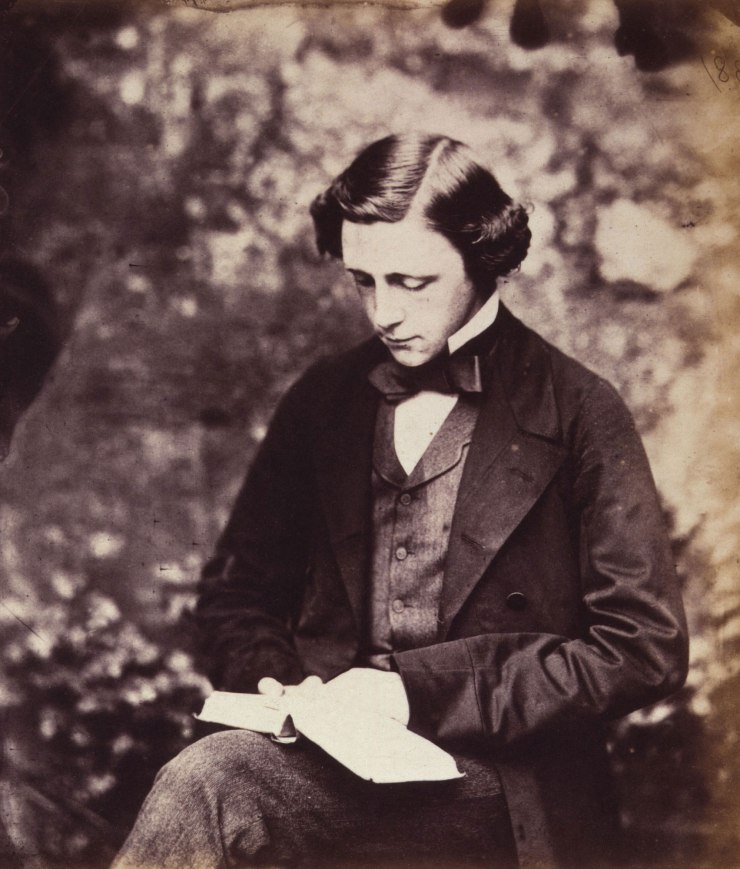 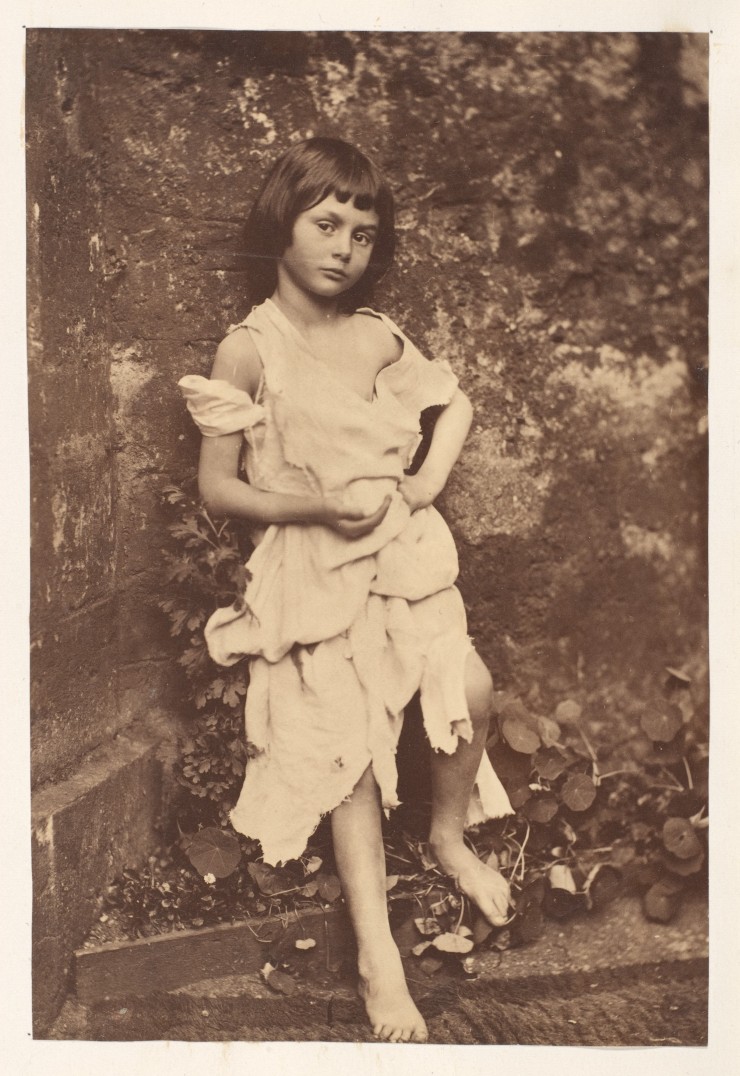 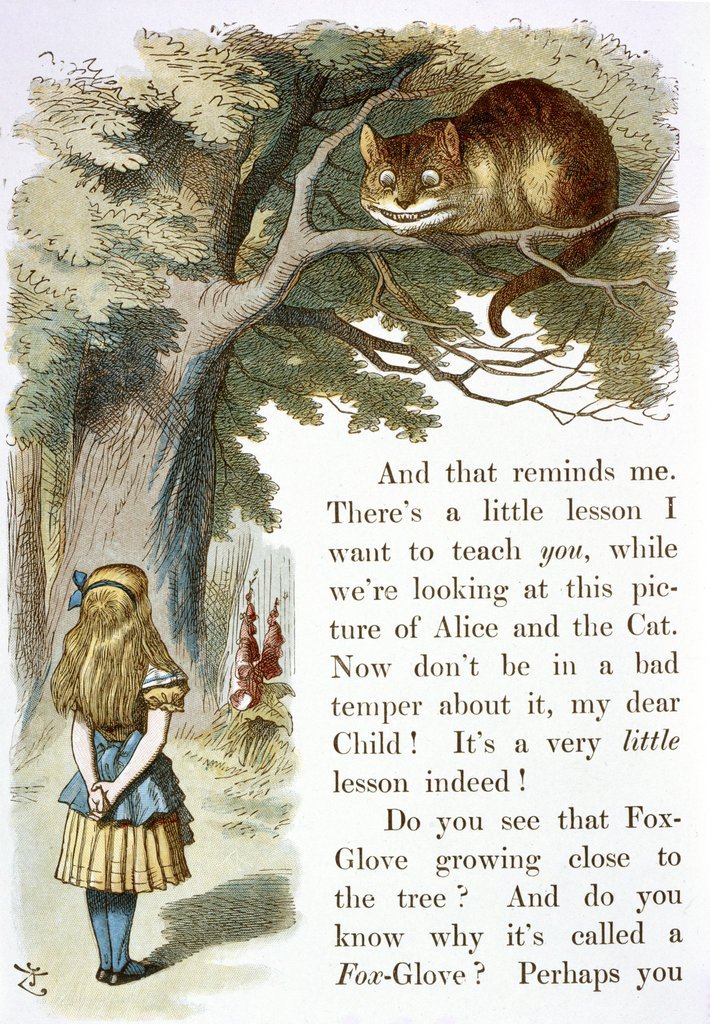 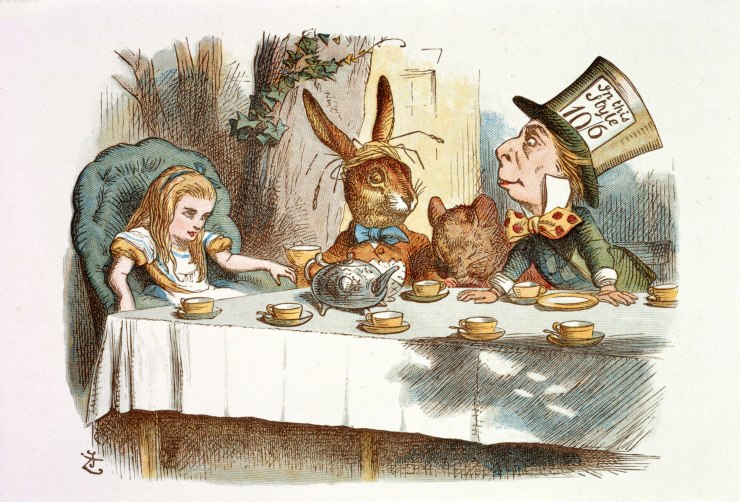 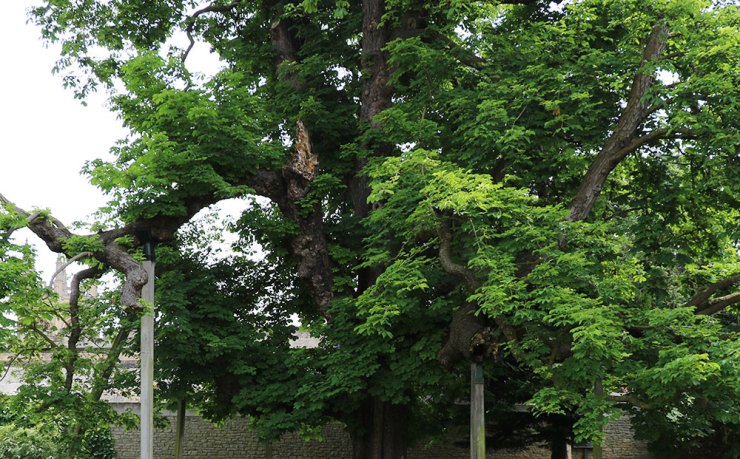 A hundred years on, the Alice tree is still attracting the attention of visitors to the Deanery.

At Oxford, like in Venice, tourists and locals equally enjoy the punts on the Thames in gondolas, sorry kayaks. Utter bliss. 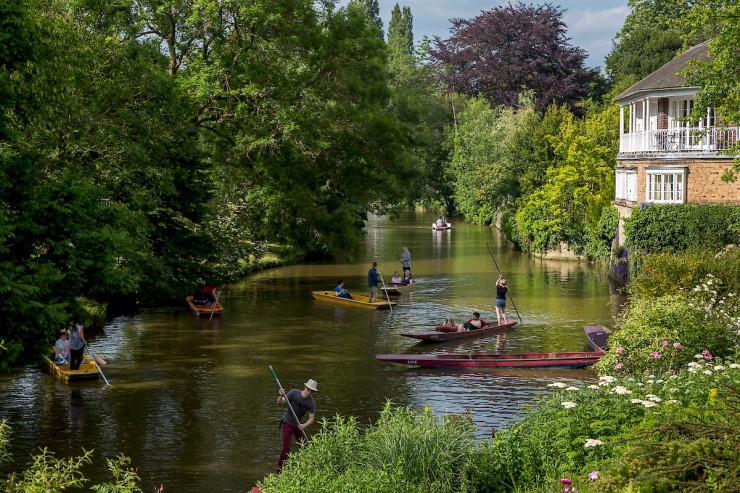 Before I write about another famous city gifted to us by the Thames, I have to mention what is abundantly growing along the borders of this river – herbs. The medicinal properties of the herbs growing beside the Thames have been known for centuries. Comfrey was used to calm ulcers, St John’s Wort was a cure for depression, the bugleweed was used as a sedative, yellow bedstraw treated infection of the feet, marigold for the eyes and the skin, a meadowsweet potion for inflammation of the eyes. Sweet sedge, that grows in the Thames water was scattered on the floors of houses and churches to make them smell fragrant. The seventeenth-century herbalist Nicholas Culpeper wrote about the healing power of herbs. Common yarrow was known to the Thames’ bargemen to help close up open wounds and prevent swelling and inflammation. Many of the herbs are used even today by alternative medicine. It can be said, that like the herbs it grows, the Thames itself can heal. 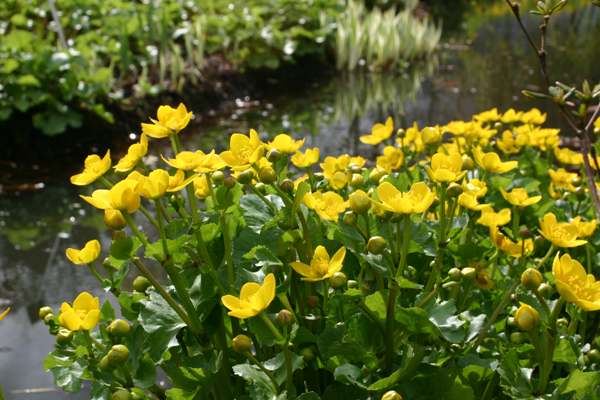 Henley-on-Thames is a beautiful town, famous for the rowing event that is known as the center of the international sailing competition. The town is consistently voted as one of the best places to live in Britain. Henley nestles at the base of the Chilterns, which is considered to be the nicest stretch of the River Thames. The town was created as a planned medieval town in the twelfth century by the royal initiative. By 1250 Henley was a flourishing market town beside the Thames. Rowing is at the heart of Henley. The first Henley Regatta was held in 1839. Since then Henley Royal Regatta has had every reigning monarch as its patron. There are two majestic statues of Gold medallists at the River and Rowing Museum, opened in 1998. It is very much worth a visit for its history of rowing in the UK and also for the history of the town of Henley.

The statues of the champion rowers, Steve Redgrave and Matthew Pinsent, at the River and Rowing Museum 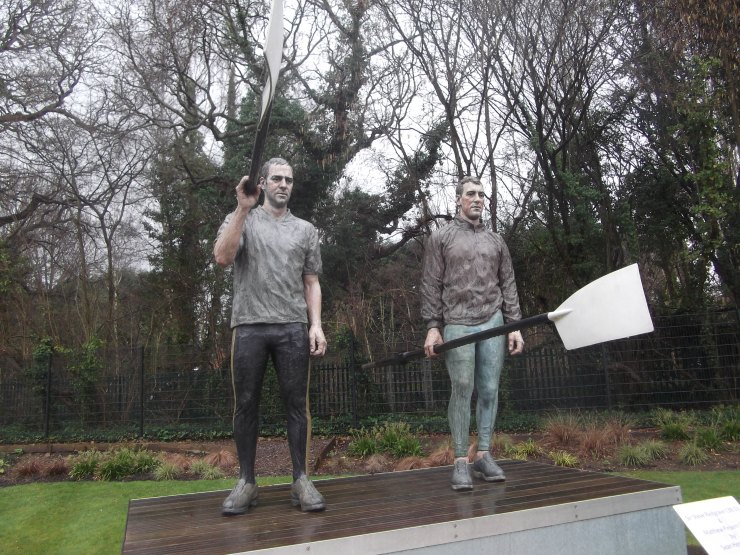 In the first week in July, one can see flamboyantly dressed people drinking Pimms in the hospitality marquee. Grace Kelly attended the Regatta with her brother Jack Kelly,Jr who won the Diamond Scull in 1947 and 1949. In the Angel on the Bridge pub, there is a plaque on the floor commemorating one of her visits – Grace Kelly stood here. In 2003 the Women’s Qudruple Sculls trophy was named in her memory.

The plaque at the Angel on the Bridge pub 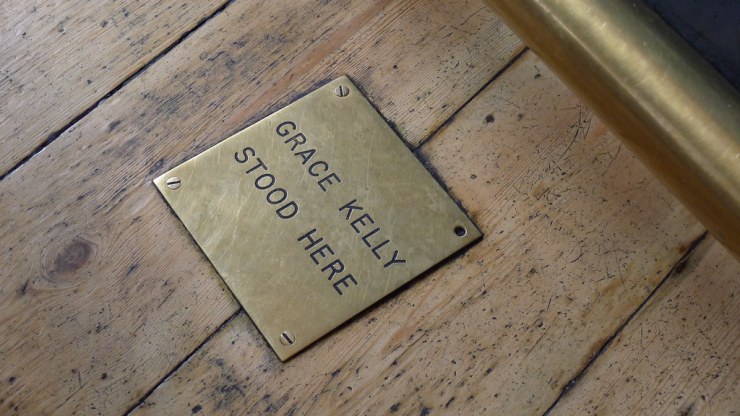 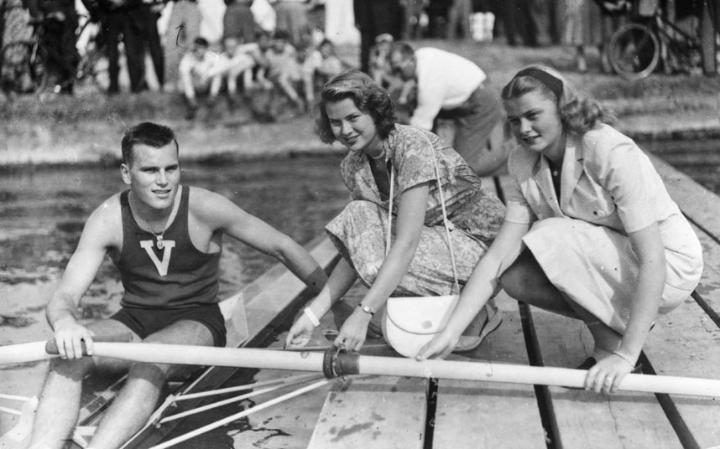 The traditional dress code for the exclusive Stewards’ Enclosure is strictly enforced. It states: “Gentlemen are required to wear lounge suits, or jackets or blazers with flannels, and a tie or cravat. Ladies are required to wear dresses or skirts with a hemline below the knee and will not be admitted wearing divided skirts, culottes, or trousers of any kind. Similarly, no one will be admitted to the Stewards’ Enclosure wearing shorts or jeans. Whilst not a requirement, it is customary for ladies to wear hats.” 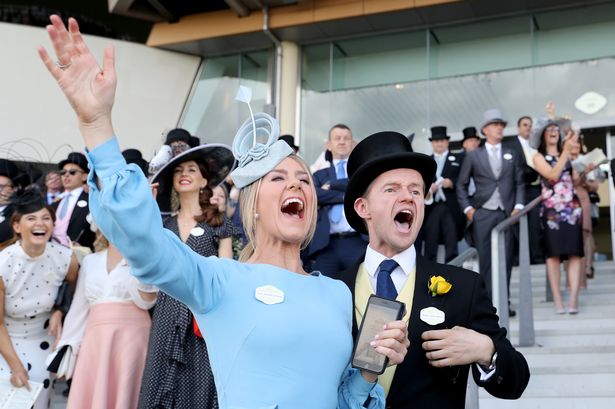 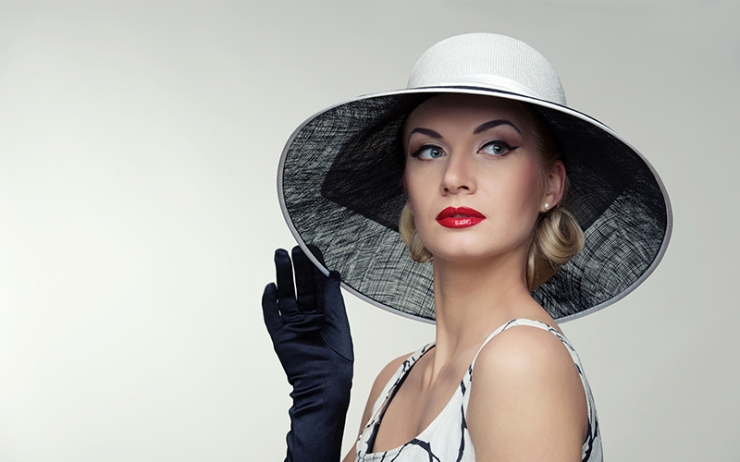 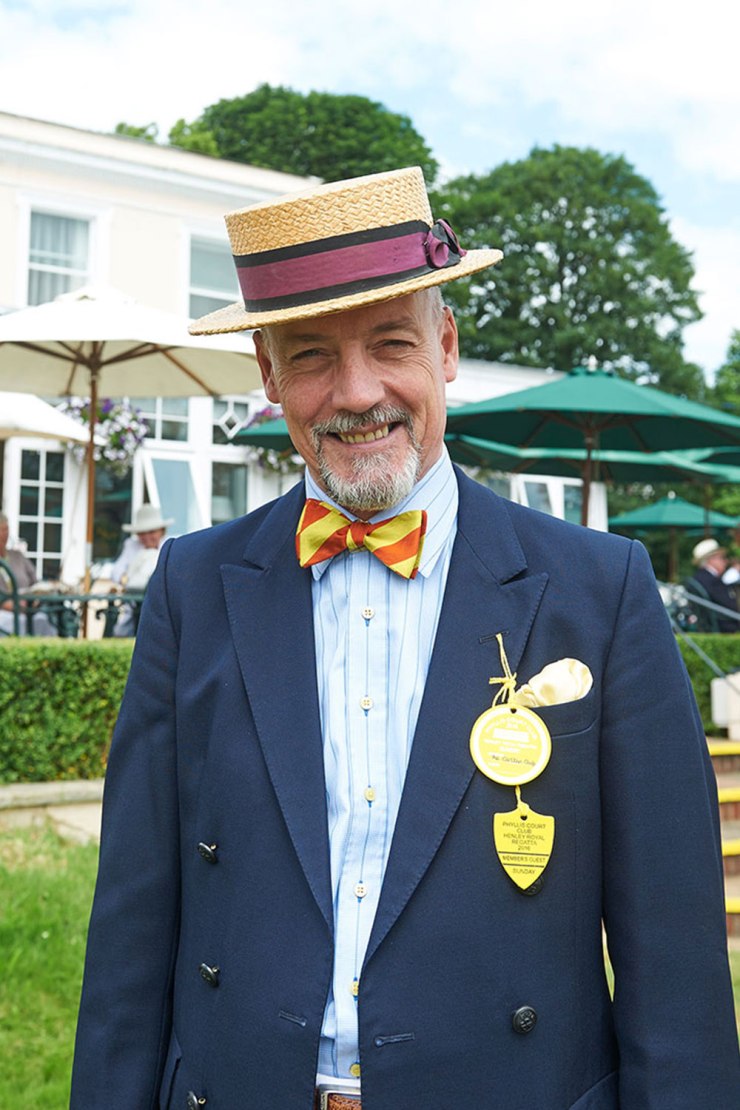 Win at Henley Regatta is the ultimate triumph for most rowers. A picnic is very much part of the Regatta tradition. The town has also many thriving businesses – ‘the butcher, the baker, and the candlestick maker’, also craft shops, bookshops, a brewery, and many old-fashioned pubs. There are the Henley Symphony Orchestra and the Kenton Theatre, which is the fourth oldest theatre in the country, established in 1805. Henley offers many cultural activities, including the Literary Festival and the Blues and Jazz Festival. 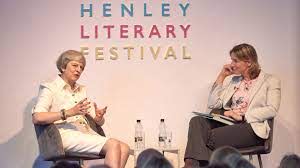 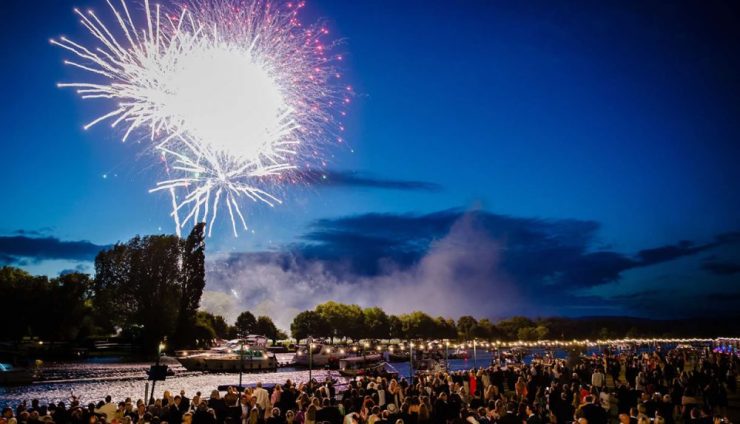 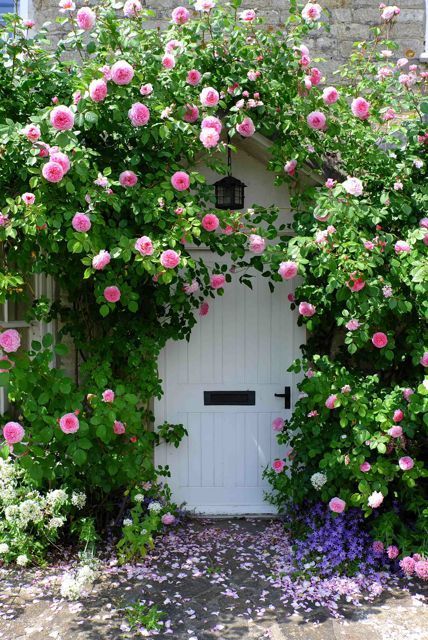 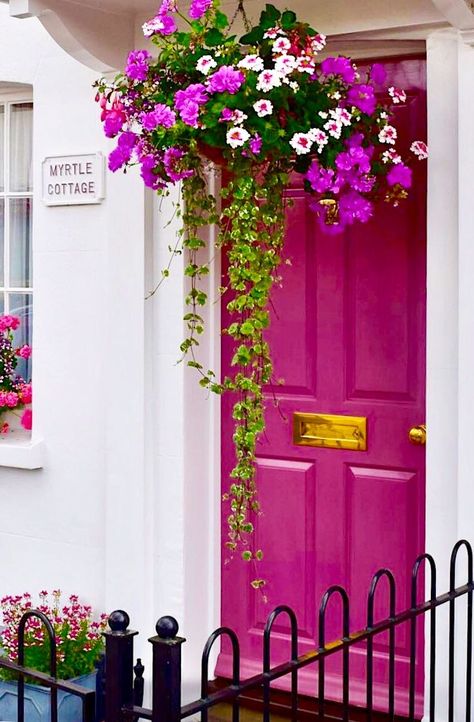 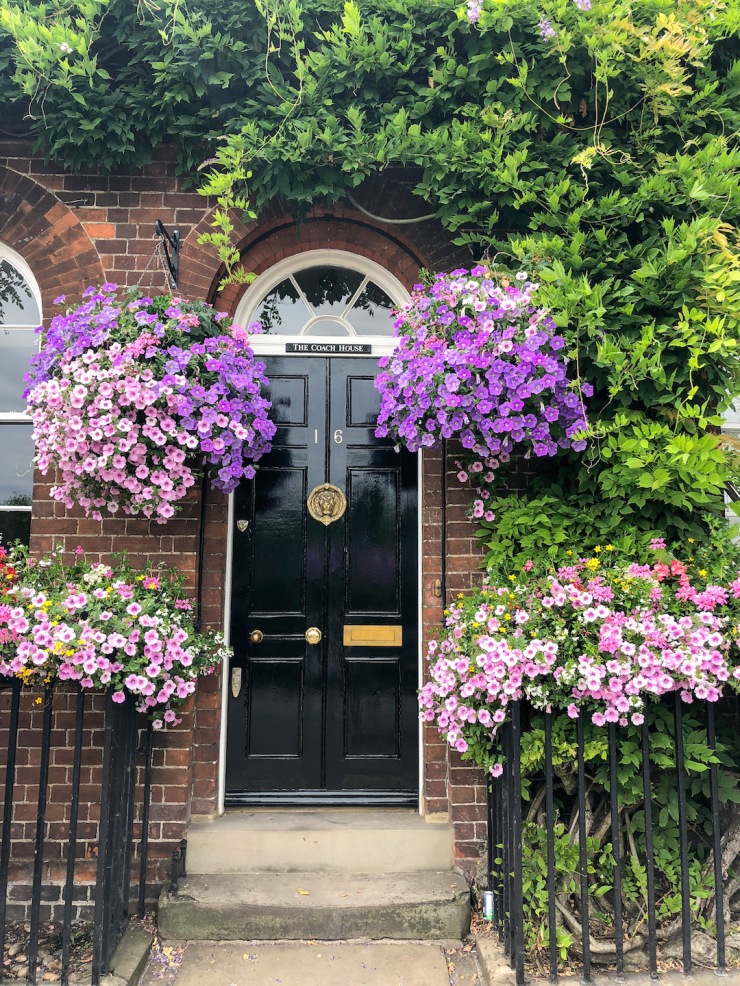 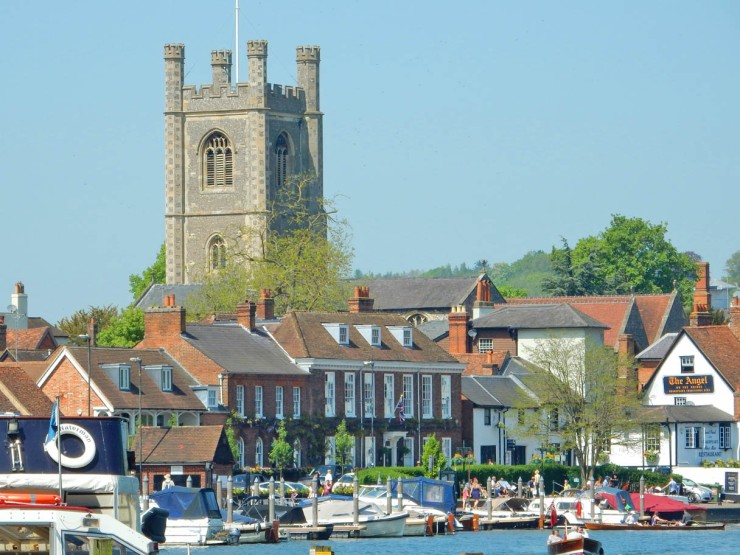 Henley maintains its bid to be the most attractive town by hanging over 170 baskets around. There is also a band playing during the summer weekends. It needs to be said that while many celebrities live here and there are opulent mansions scattered around, there is a close, friendly community that includes everyone living in town. The countryside around Henley is stunning whatever the time of the year. In the spring there are here the finest bluebell woods, in the summer harvest golden hay bales and grazing cows contrast with deep green hedgerows, the autumn brings the crisp air and smell of fallen leaves, and brambles laden with blackberries, and the ground covered with acorns and conkers. Winter’s views around Henley are also impressive, although they could bring some floods.

To see more you will have to come and visit yourself.  The best book about this extraordinary town is ‘Portrait of Henley-On-Thames’ by Jim Donahue. Originally from the US, he has been living in the Henley area for close to twenty years now and is regarded as native. My notes are based on his book. Thank you, Jim. 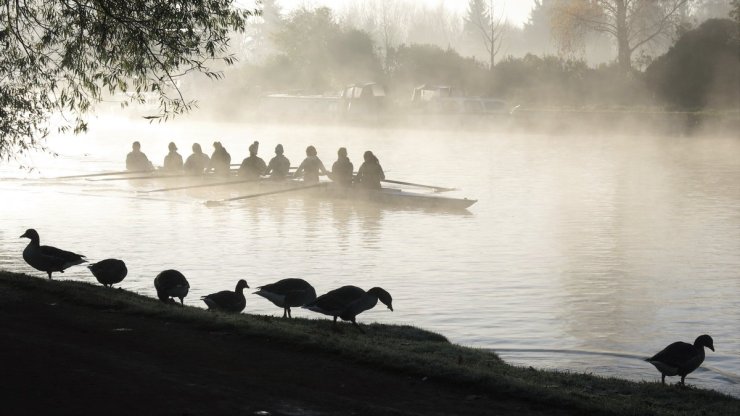 Part Two of the history of The River Thames  – next week

22 thoughts on “The Great Rivers of the World – The Thames, Part One”