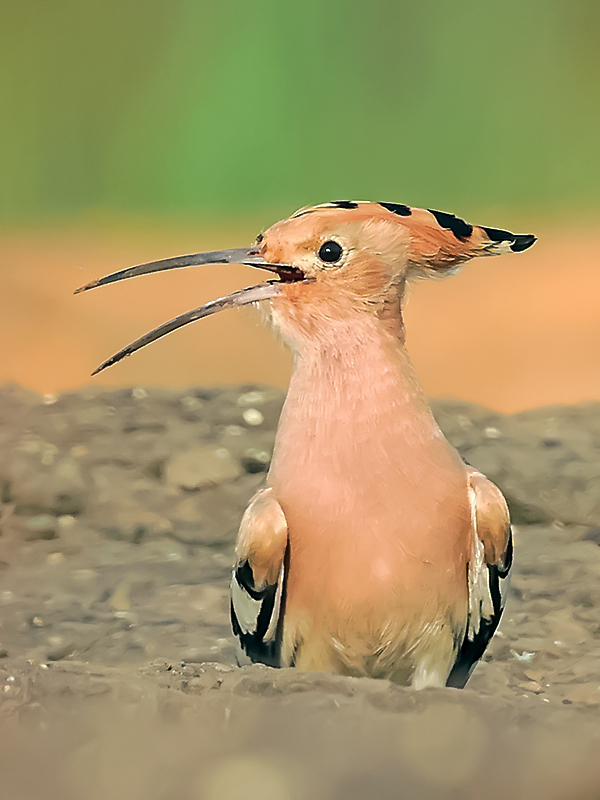 The closest Europe has to a true desert is located in south-east Spain, some 20 kilometres north of the city of Almeria. It is a shallow depression between the Sierra de Los Filabres to the north and the Sierra Alhamilla to the south. This was the area’s fossilised coral reefs that during the Miocene period eight million years ago formed part of the seafloor. Since being cut off from the Mediterranean by tectonic movement, it is now one of Iberia’s most unusual and distinctive landscapes, characterised by dramatic complexes of ridges, plateaux and deep gullies gouged out by natural processes of erosion. The desert itself is almost completely devoid of trees.

With an average of fewer than 220 millimetres rainfall annually, this is one of the driest places in Europe. On average it only rains here six days per annum, often in a violent and concentrated burst that results in flash floods capable of causing extensive destruction. Yet, this stark and seemingly inhospitable landscape, 11,475 hectares of which is protected as paraje natural, supports a range of endemic plants and arid zone wildlife, including species for which this parched corner of the Iberian peninsular represents their only toehold on mainland Europe.

Despite being one of Europe’s most distinctive areas for natural history, this part of Spain achieved notoriety of a different type in the 1960s and 1970s when it was used as a location for the filming of the so-called ‘Spaghetti Westerns’, including some starring Clint Eastwood. The local landscape provided a convincing scenic alternative to more expensive locations such as Arizona and New Mexico, and many films were made here. Today this cinematic legacy survives locally in the form of film sets built to resemble Western towns, some of which are still working locations.

Much of this bleak and harsh landscape remains largely unaffected by human activity. Few areas within it are suitable for cultivation and its most defining characteristics are arguably those that make it such an immediately hostile place. The temperatures are positively epic  – daily above 40 degree Celsius in high summer, and in winter the thermometer can drop below freezing point. Frequently harsh winds intensify these extremes. Sunshine levels are among the highest in Europe, a factor that contributes to the bleached and desiccated appearance of the landscape – there can be few places more scorching on a mid-afternoon in June than the open plateaux of Tabernas. Although certain bird species seem to revel in these conditions, most wildlife is to be found in the more hospitable conditions afforded by the ramblas, along which small streams often run. The more permanent of these provide a lifeline for a host of species that otherwise would be unable to survive here.

Climate vegetation along with ramblas comprises extensive stands of Tamarisk, Oleander, and Giant Reed or Spanish Cane, which provides excellent habitat for a range of passerine birds, both resident or migratory.  Endemic plants include Lilac-flowered Toadflax, found only in the province of Almeria, and Afro-Iberian specialities such Pteranthus dichotomous. Sheltered locations often harbour Dwarf Fan-palm, the sole European representative of the palm family. It can withstand temperatures as low as minus 12 degrees Celsius and recovers quickly after bushfires, regenerating from the scorched stumps.

Particularly interesting is the parasitic Cynamorium cocineum, its bizarre phallic-shaped form sprouting out of bare gravel. The vegetation along the ramblas supports a host of small birds, particularly warblers such as Sardinian and Subalpine, as well as Rufous Bush Chat. In winter the bushes can be alive with Chiffchaffs, which pass winter here after breeding in northern Europe. The rocky slopes along the ramblas are the haunt of birds that favour tracks of broken ground, such as Blue Rock Thrush, Rock Bunting, Rock Sparrow, and Black Wheatear. The latter is particularly common and often seen perching on prominent rocks from which the male delivers his scratchy song.

The Tabernas is also home to the three of the classic Mediterranean exotics – Bee-eater, Hoopoe and Roller. These are perhaps best observed when nesting in cavities in cliff faces or banks of exposed sand. Whereas this is the normal breeding habitat for Bee-eaters, both Hoopoe and Roller usually nest in trees but are forced to choose alternative sites in the absence of any here. Hoopoes are ground-feeders, strutting on areas of bare soil or short grass in search of insects. Surprisingly inconspicuous given their extravagant plumage, they often pass unnoticed until they fly up from the ground, their flashy black and white wings and seemingly random flight pattern catching the eye. Rollers, however, can be easy to spot as they sit like sentinels on telegraph wires or a protruding dead branch surveying the ground below for invertebrates or small reptiles.  Meanwhile, the distinctive ‘pirrup-pirrup’ call of Bee-eaters overhead as they hawk for insects is one defining sound of summer in this corner of Spain. 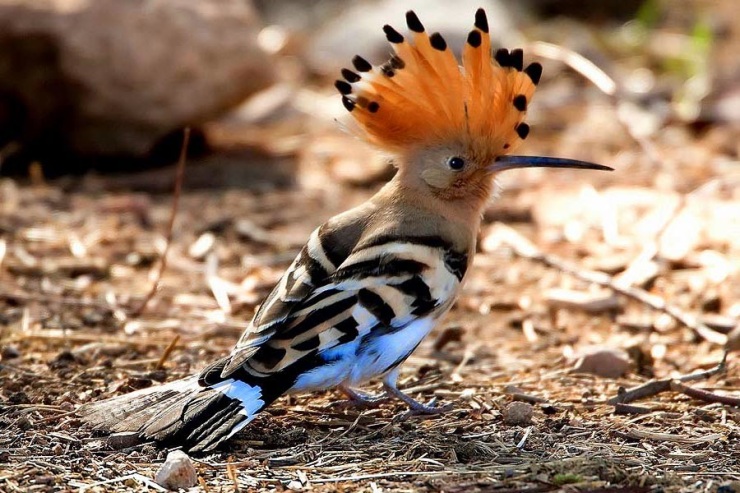 Many of the avian specialities that draw wildlife enthusiasts to Tabernas are classic ‘steppe’ species, birds that are dependent on wide, undisturbed open spaces and therefore under increasing pressure as this type of habitat become scarcer across Europe. There are good numbers of Stone-curlew here; this enigmatic bird is crepuscular and nocturnal, and so not easy to locate in the middle of the day, when it spends its time resting in any available shade. At dusk, however, it becomes active and its eerie cries are the sound of the open plateaux at night as the birds hop around in search of food.  A  summer migrant to Europe from Africa, the Stone-curlew has decreased across much of the range as a result of rising agricultural activities. Spain is home to approximately 70 per cent of the remaining  European population and the Tabernas area supports one of the highest densities anywhere in the country.

Spiny-footed Lizards are a common sight around Tabernas. The brightly coloured males are very territorial during the breeding season, defending their territory against rivals and chasing any passing females.

Reptiles abound in Tabernas. They include the Ladder Snake, a large species reaching up to 160 centimetres in length. Mainly ground-dwelling, it also climbs well and moves easily on rocky terrain in search of prey.

One of the iconic birds locally is the Trumpeter Finch. This desert-dwelling species occupies a range extending from the Canary Islands and North Africa through the Middle East and into Pakistan and India. In the European context, its requirement for very sparsely vegetated and arid steppe terrain is met in the Tabernas area. Although Trumpeter Finch often nests semi-colonially, with several pairs frequenting the same area, they are nomadic in nature, dispersing over large areas, especially breeding. Their precise location at any time is generally determined by the presence of what are often ephemeral sources of water. However, attention is often drawn by their distinctive buzzing call – actually their song – which resembles the sound of a toy trumpet and from which they derive their common name.

Larks are well represented here but to birders, the local prize goes to Dupont’s Lark, a few pairs of which are resident in the area but are notoriously difficult to find. Highly terrestrial, it rarely flies, preferring to run away from danger.

Cabo de Gata is the most south-easterly point of the Iberian Peninsula and an outstanding place for wildlife.  It has particularly diverse flora, with over 1,000 species of plant recorded here. The coastal salinas in this part of Spain are home to the globally endangered White-headed Duck, which is increasing in numbers in this area.  In spring, the blue-billed males can be seen in display, with their tail feathers held erect.

Another joyful encounter is with a displaying male Little Bustard, as he leaps from the ground with his wings outspread. This behaviour is designed to attract the attention of passing females and is accompanied by a distinctive grating call. At another time of year, Little  Bustard is hard to find. 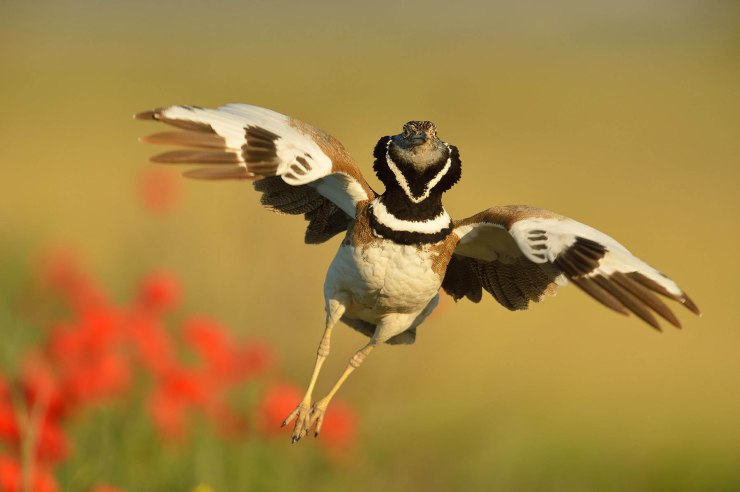 The Algerian Hedgehog is generally smaller and paler than the European Hedgehog. It can be spotted by torchlight in the ramblas as it forages for invertebrates, fallen fruit or seeds. As all hedgehogs are, these here are beautiful too. 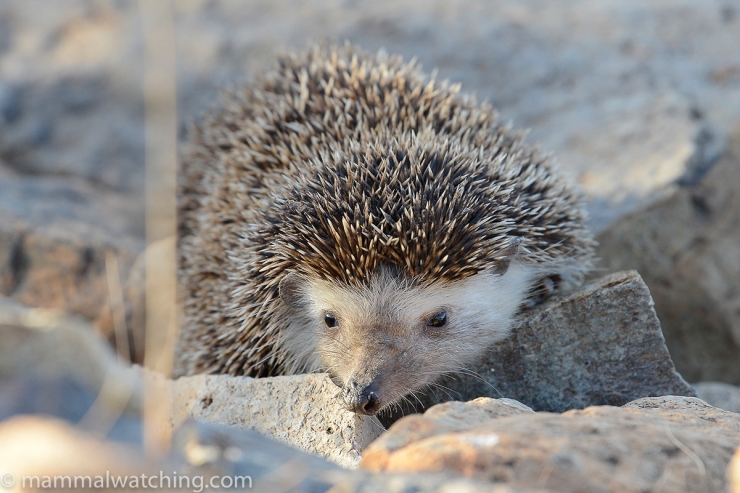 As Spain is one of the most popular destinations for sun-seeking holidaymakers, a visit to a unique place such as the Tabernas is a must.