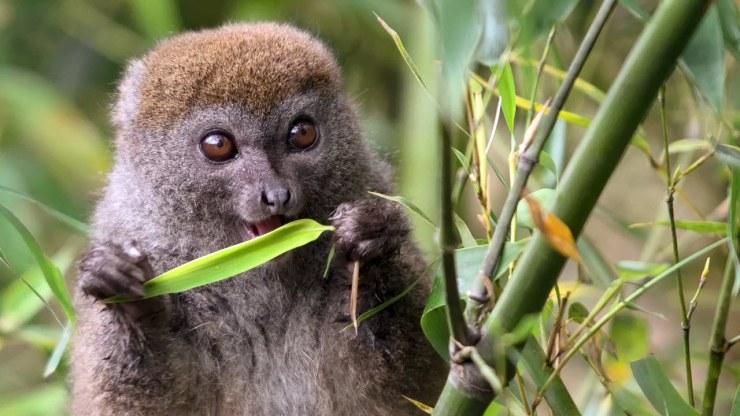 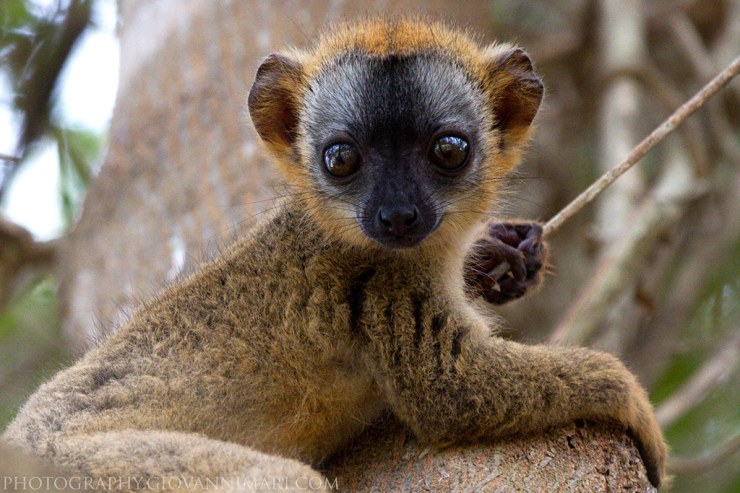 The Spiny Desert of Madagascar 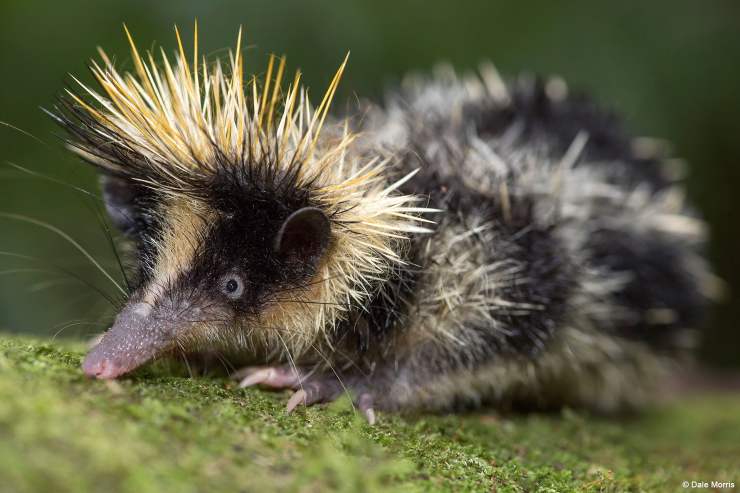 The Spiny Desert of the island’s deep south-west is one of the most remarkable. The landscape lies flat in a rain shadow and it only receives an average annual rainfall of between 300 and 500 millimetres per annum. The rain mostly falls during December and January, often in the form of violent thunderstorms, but it is notoriously unreliable, and some years may see hardly any precipitation here at all. The thin, porous soils have little water retention capacity, and so plants and wildlife must be capable of withstanding long periods of drought, as well as high temperatures in excess of 40 Celsius degrees. Such demanding conditions have produced a specialised flora and fauna, much of which is highly localised, and under increasing pressure from a range of threats. The protection of these remarkable semi-desert habitats and their wildlife is now a major conservation priority. 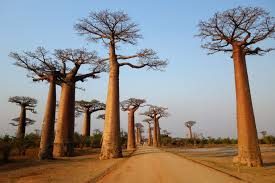 The monumental baobab trees are icons of Madagascar, yet sadly they may well prove to be the last of their kind, as land-use changes around them are preventing the germination of an adequate successful generation of young trees. 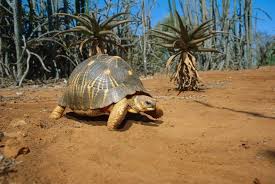 Other characteristics of the Spiny Desert are Octopus trees, their wavy limbs rising above the smaller shrubs that help make this habitat one of the most important of all of Madagascar. Although, reluctantly I have to mention one creature that lives in the Spiny Desert. It is the Dumeril’s Ground Boa which despite its name is at home up in trees as on the ground and feeds on anything that moves, birds and small mammals. It’s mainly nocturnal, resting up during the day in leaf litter on the ground, in burrows or in holes in trees. Like all pythons, it constricts its prey before swallowing it whole.  I think you will be glad that I am sparing you from looking at this creature. I am still waiting for the universe to answer my question: apart from causing nightmares, what are snakes for? 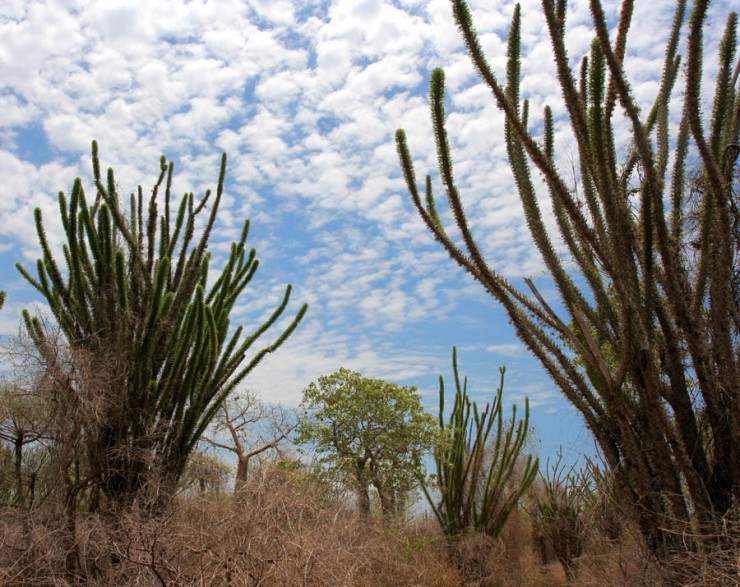 The precise composition of the vegetation of the Spiny Desert varies widely from one locality to another; it is composed generally of succulents, notably thorny, cactus-like plants. The result is a unique, in parts, type of dry, deciduous woodland dominated by thorny species, which gives the habitat its other name the Spiny Forest.

One of the survival techniques is enhanced water storage capacity in the pulpy tissue within large trunks and branches, as well as tubers, and extended root systems that help extract what little moisture there is in the soil. Other features are small needle-like leaves and waxy or hairy coating typical of plants that are adapted to life in arid zones. 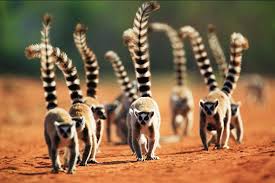 Madagascar is renowned for its lemurs, a unique group of primates that are endemic to the island. During their long history of isolation, lemurs have developed an impressive variety of adaptations, their evolution reflecting the diversity of ecological opportunities of Madagascar. The two most regularly seen lemur species are the Ring-tailed Lemur and Sifaka. Both are essentially diurnal, and often to be seen scrambling and jumping about in thickets of razor-sharp foliage, their soft, velvety hands coping with barbs and spines without any difficulty. They are equally impressive on the ground. Ring-tailed Lemurs are the most terrestrial of all lemurs, spending much of their time on the ground foraging for food and are capable of living in areas that are largely devoid of trees. Ring-tailed Lemurs are highly dextrous and seemingly impervious to the vicious thorns that are characteristic of Spiny Desert trees and plants. They live in a range of different habitats, from thick forest to rocky landscapes. This versatility has helped them to survive as Madagascar’s landscapes changed around them. 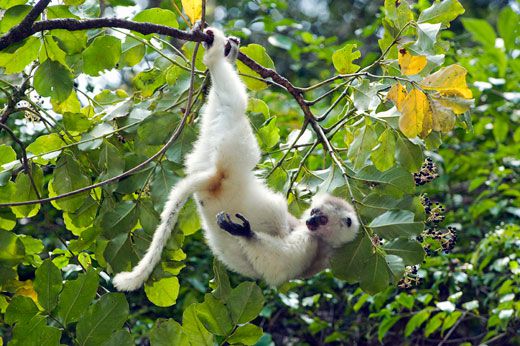 Sifakas mainly prefer to live among the tree canopies but when they do come down they have a distinct and engaging form of locomotion  – to cover open ground they leap sideways in a series of extended jumps, holding their arms outstretched as a way of keeping balance. Sifakas usually rest during the hottest part of the day, foraging for food in the early morning and late afternoon. They feed primarily on leaves, moving acrobatically through the branches and using their long tails as balance when leaping from tree to tree or hanging upside down. 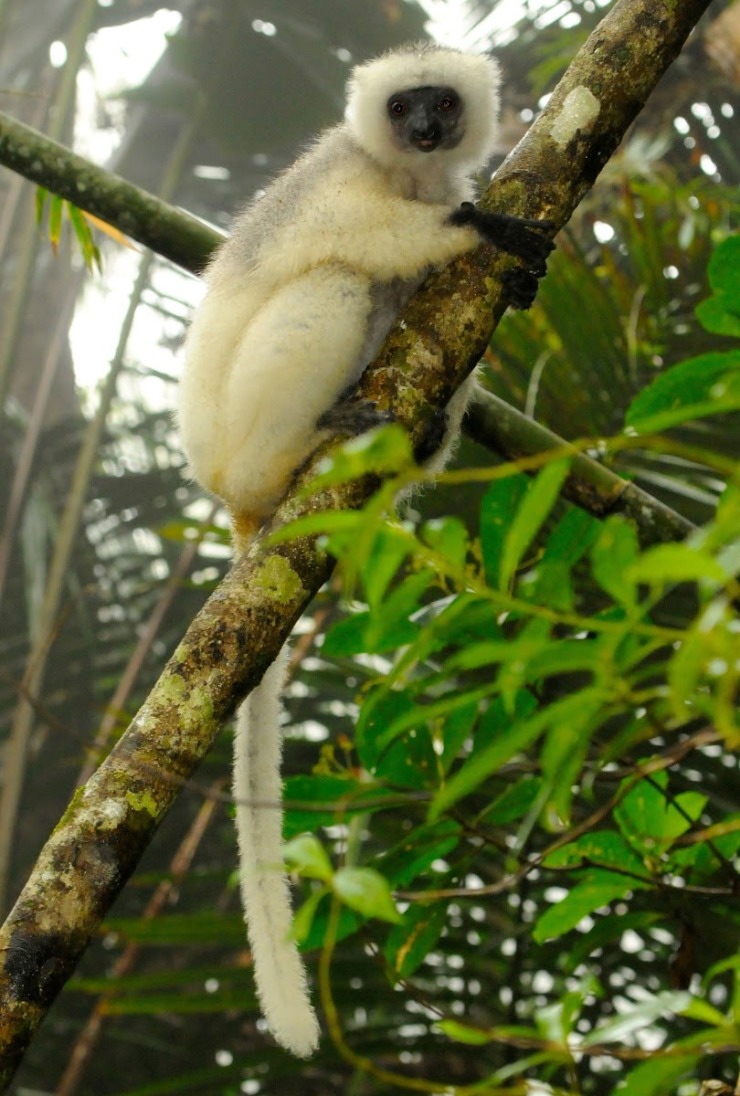 Both Sifakas and Ring-tailed Lemurs live in family groups, Sifakas in a small group of twelve, while Ring-tailed Lemurs can be seen in troops of up to twenty. Both societies are female-dominated, but with males having the responsibility to protect the family from predators. Among these are the Fossa, a civet-like creature and the lemur’s main predator. Endemic to Madagascar, the Fossa is the island’s largest carnivore and with a tail as long as the rest of the body, it can reach a total length of two metres. It can climb trees with ease and move on the ground at a good speed. 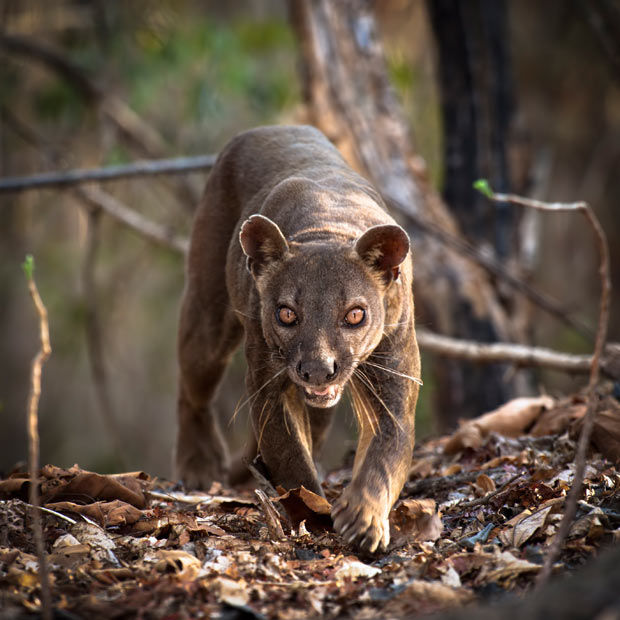 Fossas are among the most elusive and difficult to see of Madagascar’s mammals. One of the best opportunities is a chance encounter upon one of their ‘mating trees’. Their coupling ritual is extraordinary. A single female Fossa will position herself high in the tree canopy, attracting five or six male animals below. She will mate with some or all gathered, each of which will climb the tree to reach her and will then mate with her in a session lasting two or more hours. A female may occupy the mating tree for three or four days and then move on, some time to be replaced by another female and the process starts again. This usually takes place between September and November, with a female giving birth to two or four young three months later. 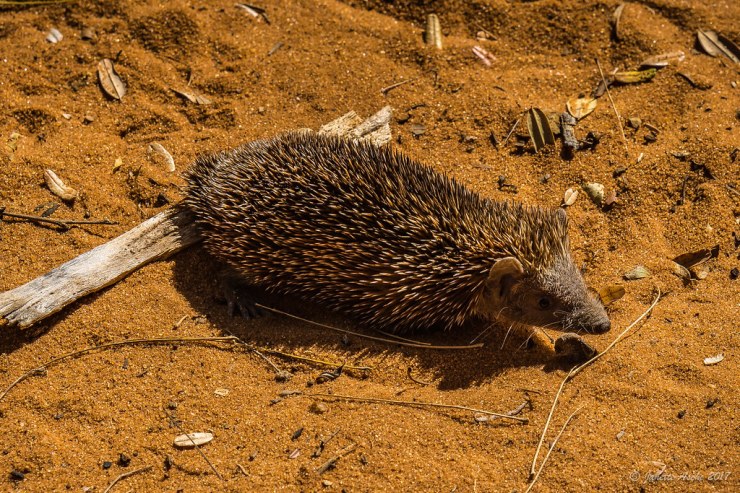 The other mammal living on Madagascar is related to moles and shrews: the nocturnal Lesser Hedgehog. They feed on insects and while usually foraging on the ground, they can climb trees and will scale quite large trees in search of insects. During the dry season, it becomes dormant and will emerge from its den only when it can be confident of finding enough food. Although still relatively common it is prized by the local people as a source of food and is under pressure from excessive hunting.

Below is shown the Sickle-billed Vanga 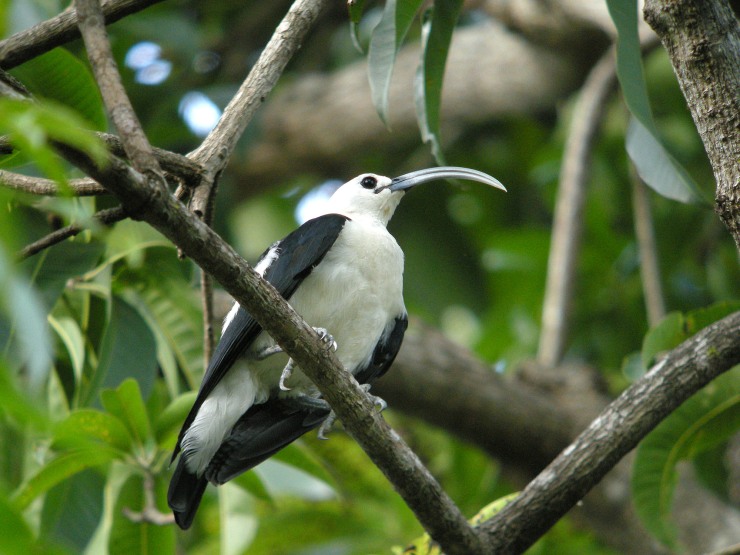 The majority of the 300 bird species in Madagascar are endemic. Many have adapted specially to local conditions such as the Sickle-billed Vanga. It uses its exaggerated curved beak to probe into crevices and under bark in search of insects. Some of the birds living in the Spiny Desert are very rare and vulnerable to disturbance and changes in their environment. Tracks on the desert sand are an important indicator of what wildlife is using a particular area. This is important for ground-dwelling birds such as two of the blue riband species here, the Long-tailed Ground Roller and Subdesert Mesite. They are found on a narrow coastal strip. The Long-tailed Ground Roller is highly territorial and nests in sandy banks, excavating a tunnel with a chamber at the end in which a female will lay her eggs. The Subdesert Mesite has a restricted range. It is known only in a few locations, where it forages for insects among the soil and leaf litter and builds its platform nest in thick shrubs up to 2 metres above the ground. Other notable Spiny Desert species include Lafresnaye’s Vanga and Madagascar Plover.

Below is shown the Long-tailed Ground Roller 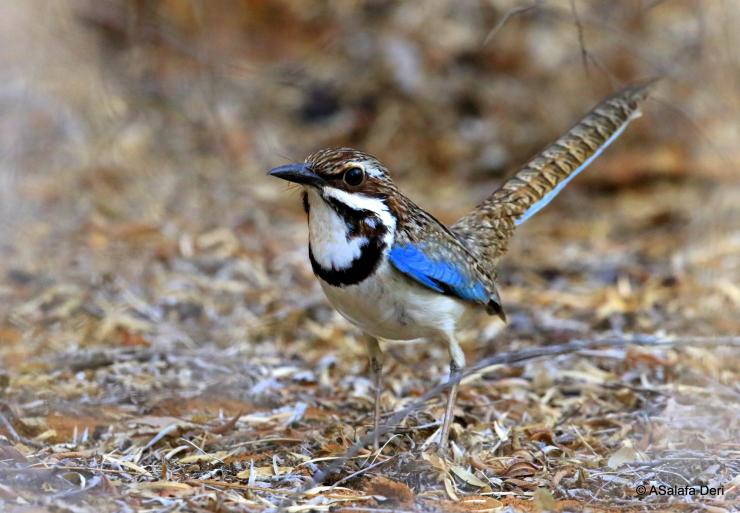 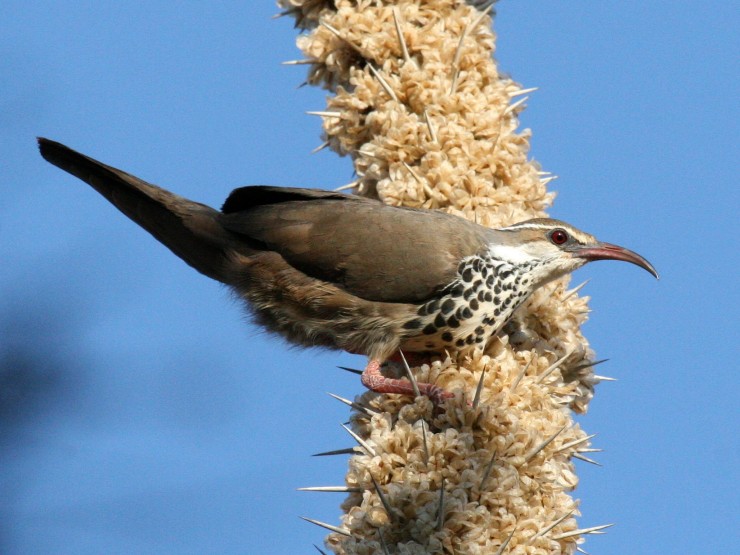 One of the most attractive species of the Spiny Desert is the Radiated Tortoise, which is endemic to the island. Historically it used to be safe from the local population because of the traditional beliefs that harming or killing them is a taboo and it will bring bad luck. In recent years these beliefs have broken down and taking the wildlife to a cooking pot becomes a necessity for many locals without means of support. Equally, the financial incentives offered by unscrupulous collectors of wildlife are hard for local people to resist. 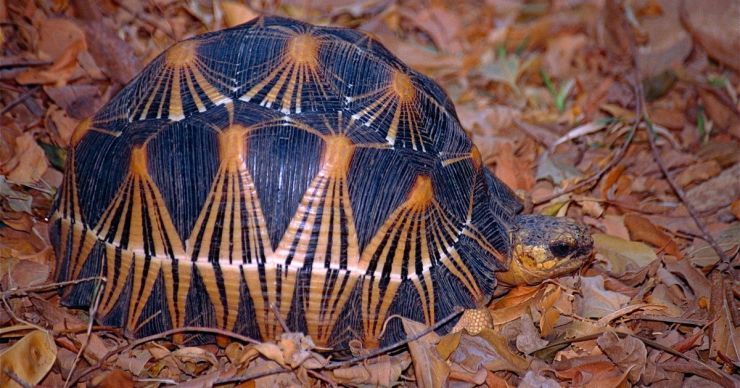 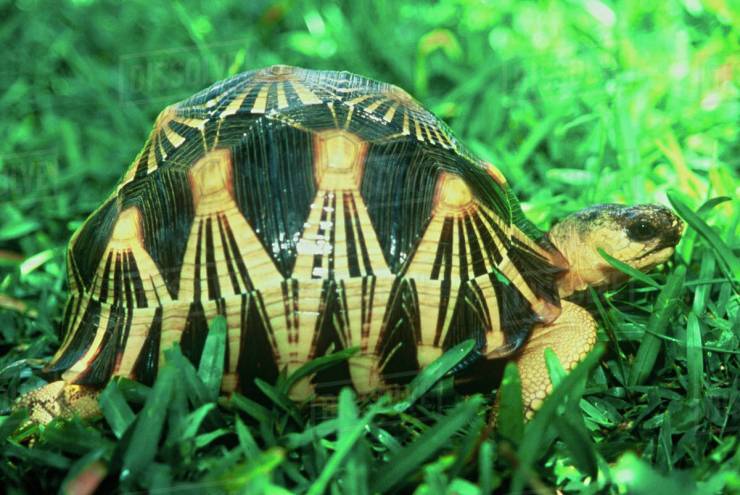 The illegal pet trade has helped put the Radiated Tortoise on the Critically Endangered list. Many areas have been stripped of all their tortoises, with armed bands of poachers moving in on a few surviving populations.  Without action to stop them this species could become extinct within a short time. Meanwhile, human pressure on the Spiny Desert continues to intensify. The felling of trees for charcoal production is a major source of forest destruction and agriculture expansion. Deforestation to plant maize and provide new areas of pasture for cattle is having a serious effect on the quality and extent of wildlife habitat. Of paramount concern is the fact that despite the existence of some national parks, the vast majority of the Spiny Desert has very little statutory or practical protection. Quite recently a more than one-hundred-year-old giant tortoise of the Galapagos died. He was the last one. And do you remember the Dodo? 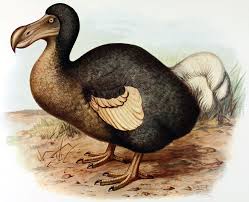 The wildlife of Madagascar doesn’t belong to the island only; it is the world’s heritage. 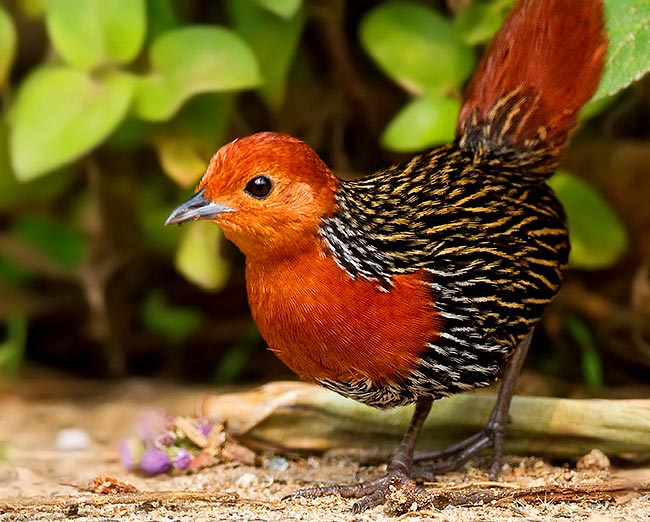 This beautiful bird is a Flufftail. Have we got enough time to save it?