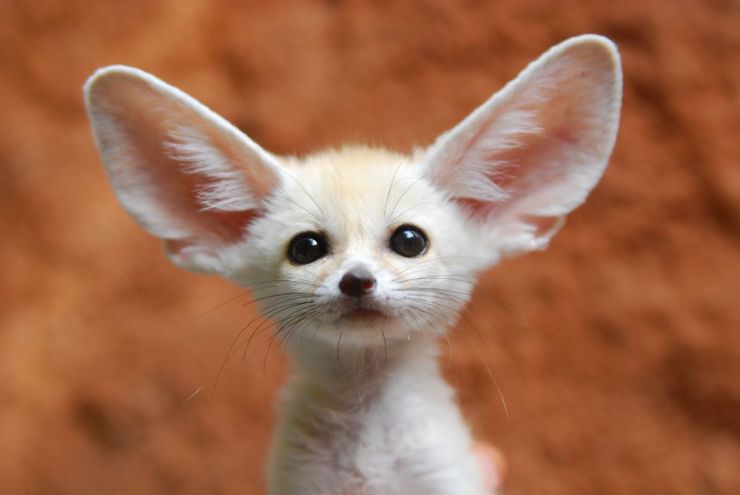 Fennec fox of the Kalahari as a baby. 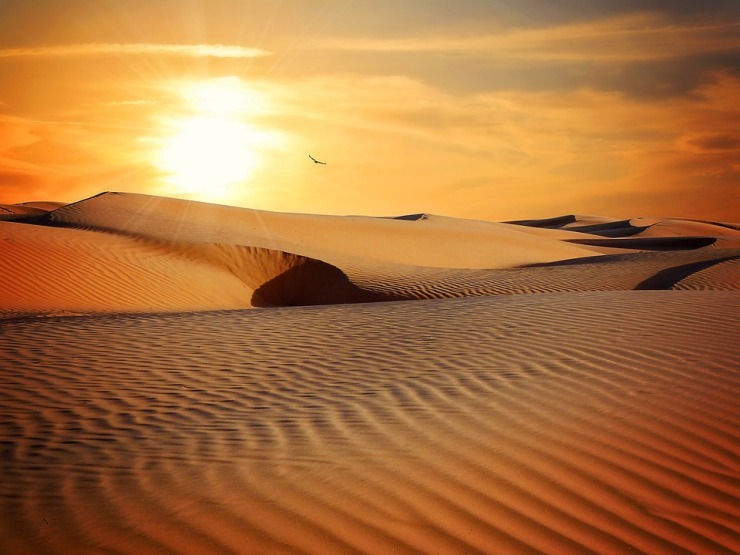 The Greatest of Deserts

Among many of Africa’s deserts, and indeed, the world’s ones, one is the most magnificent – the Sahara. It is home to diverse wildlife, from crocodiles to elephants, and many others. The Sahara contains some of the most extensive sand dunes found anywhere on earth. Intense light and shadows create a surreal effect on the curved faces of the sun-burned coloured sand dunes of the Sahara, that were built by the winds. 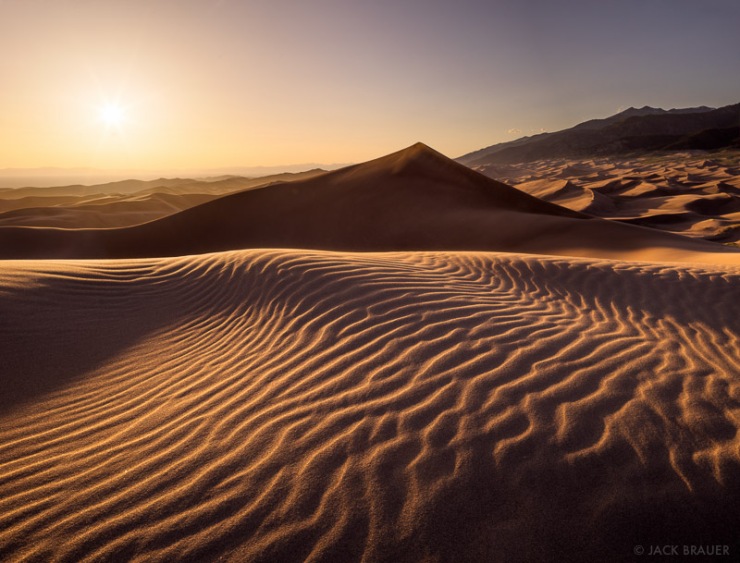 Yet, the nomadic tribes of the Sahara, like the Tuareg, had no problem to lead camel caravans across it for thousands of years. Without them, the ancient trading of salt, gold, ivory, and hides could not have flourished. The Sahara is the world’s largest desert covering 9 million square kilometres, a quarter of Africa’s land surface. It stretches from the Atlantic in the west to the Red Sea, over 6,000 kilometres to the east. Two powerful rivers – the Nile and the Niger – cross parts of the desert, their freshwater providing a lifeline for both wildlife and humans alike. 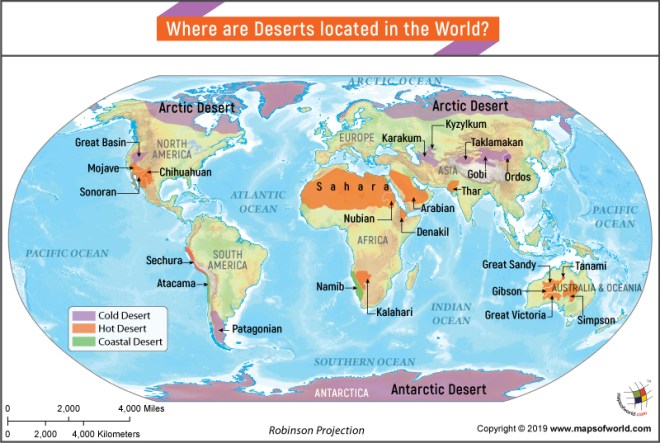 Remarkably, the spring-fed oases support a range of wildlife that otherwise would not be able to survive in such an inhospitable environment. The Sahara is the world’s hottest desert with the temperature rising to 55 degrees Celsius in the shade, and it is also the aridest one. Sandstorms occur regularly in the Sahara and are caused by high winds whipping up loose particles from the surface of the ground. The leading edge of a sandstorm can reach heights of 1.5 kilometres. 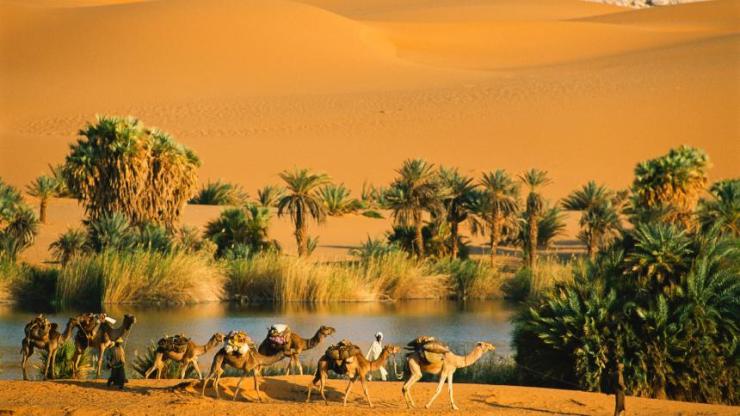 When the air is clear the night sky over the Sahara with the stars above provides the answer to the question – why were the ancient Arabs, and the ancient Egyptians in particular, such good astronomers? There is a feeling of mystery about the Sahara as there is so much life hidden under the sand. Animals and plants have to adapt to the harsh conditions as there is nowhere else outside the polar regions so hostile to most forms of life. Those who travel in a camel caravan can understand the emotional statement written by the greatest Sahara traveller, Theodore Monod: ‘The Sahara is the largest, most beautiful, most perfect desert in the world.’ Only a quarter of the desert is covered by sand dunes, the rest is mostly rocks, vast gravel plains, oceanic in scale, coarse stones, and dried up old river beds. In the north, there is the Atlas mountain range in Morocco, which is uncompromisingly severe.

At the centre of the desert, in southern Algeria, is the Ahaggar mountain chain with peaks of around 9,000 feet. Some of the cones were eroded away to reveal spectacularly fluted pillars of basalt that had solidified inside. Volcanic plugs stick up through the crystalline rocks of the Ahaggar mountains as evidence of great upheavals far in the past. The ancient crystalline base of the desert has been shaped and reshaped over millions of years to form a variety of different geological materials ranging from the hardest rock to gravel and, of course, the sand. In the sandy parts of the desert, huge quantities of sand form a fluid landscape of crests and valleys in a sand sea that is constantly sculpted by the winds. 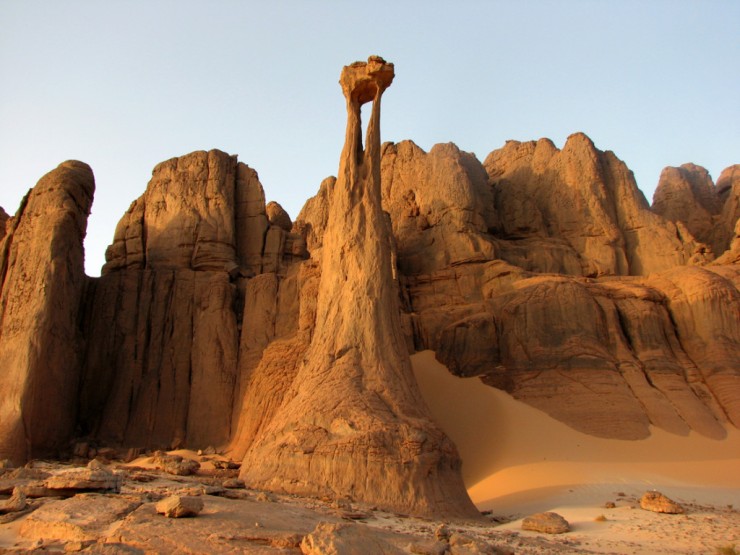 The Sahara’s wildlife depends on the few spring-fed oases, that are scattered in the barren landscape. There is very little perennial vegetation and the existing plants have adapted to survive on the erratic and minimal rainfall.  Desert Monitors are the largest lizards in the Sahara. Although usually found where there is some shrubbery where they can find shelter and some shade, they are also capable of crossing open sand. They chase their prey with sudden bursts of speed.

Widespread across the Sahara, the Fennec Fox is a perfect example of successful adaptation to life in the desert. Its sandy-brown coat helps with camouflage and heat reflection, while large ears radiate body heat. 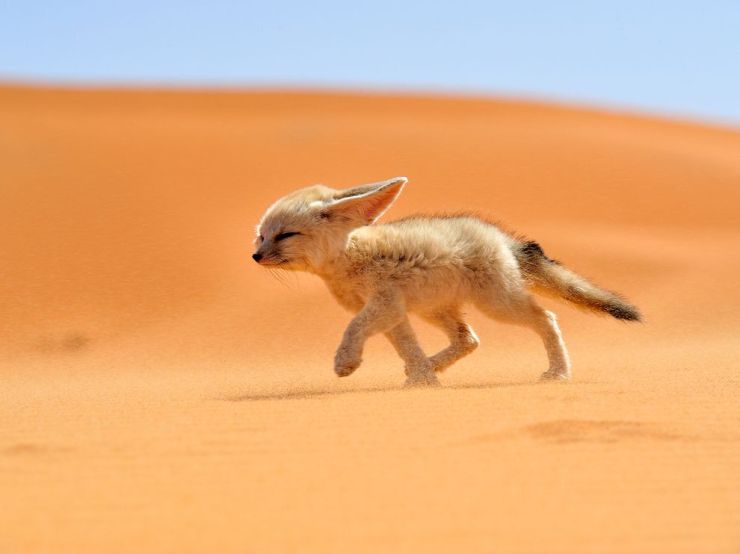 The morning light in the desert shows in the sand the traces of insects such as this darkling beetle: 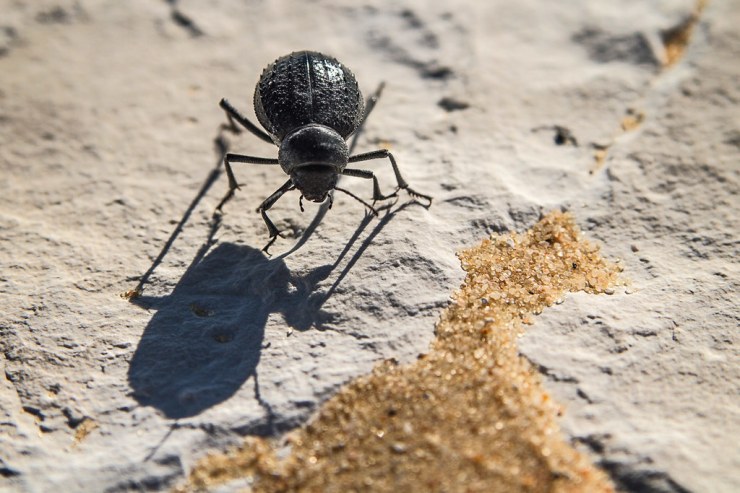 Just a handful of Addax survive in the wild, and they are close to extinction following decades of hunting and disturbance. Fortunately, a substantial captive population brings hope that they could be reintroduced to the wild once a suitable safe area is found where they can be well protected. 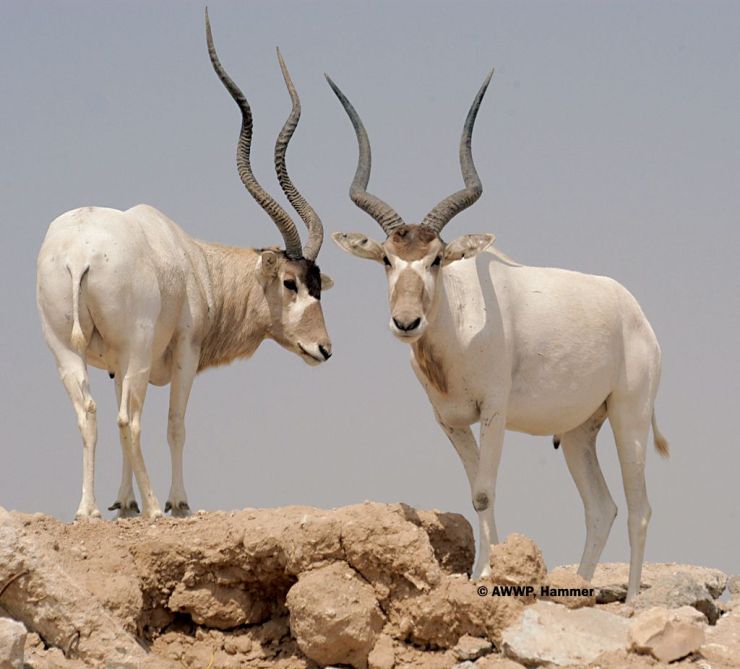 The majestic Scimitar-horned Oryx was once widespread across the Sahara but now is extinct in the wild. It is the same case here, with the surviving Oryx living only in captivity. 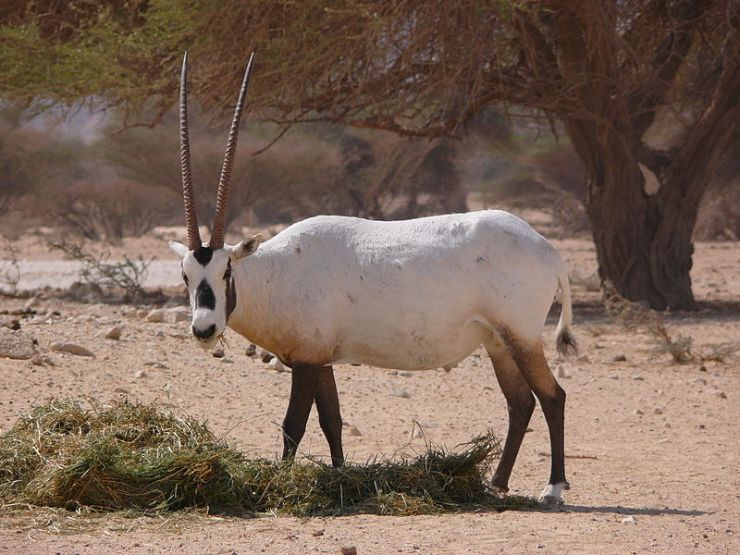 The herds of antelope once counted in their thousands are now almost extinct due to uncontrolled hunting and disturbance. The same can be said about the population of the gazelle. As the herds of antelope declined, so did the numbers of the predators that depended upon them. Among them was the Cheetah, once widely distributed across the Sahara but now on the brink of extinction. 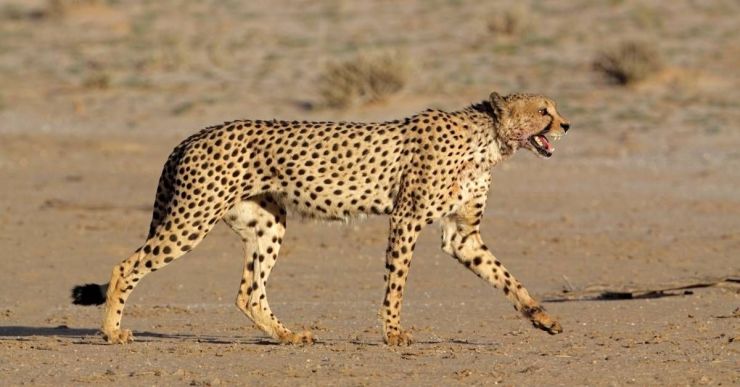 The surviving population of this elusive mammal is evidently small and it is estimated that 200 individuals are left in the wild. The continuing persecution from humans makes their conservation difficult to achieve. 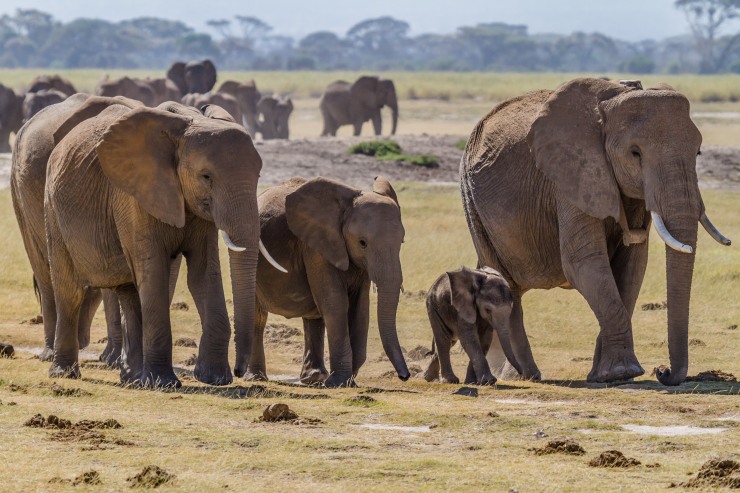 The southern border of the Sahara expands into Mali. This is where family groups of elephants can be seen, led by the matriarch, while the bull elephants are solitary. They are tolerated by the local tribes but increasingly the relationship is strained because of the competition for grazing spaces. 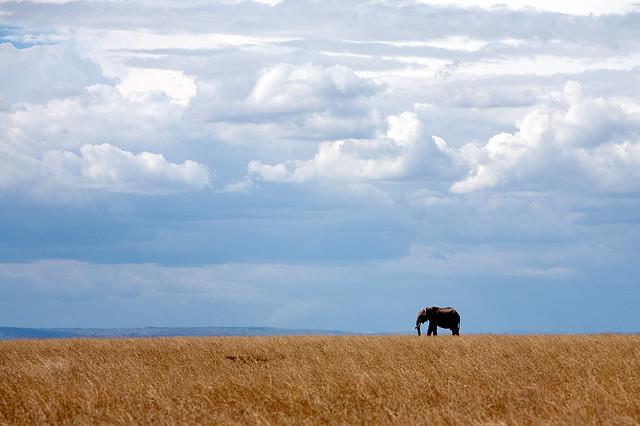 The small groups of Nile crocodiles are dwindling as the temperatures of the Sahara are rising, leading to further evaporation of water holes. Those crocodiles that are still surviving are scattered around and the struggle makes them smaller than what is normally expected of the species. 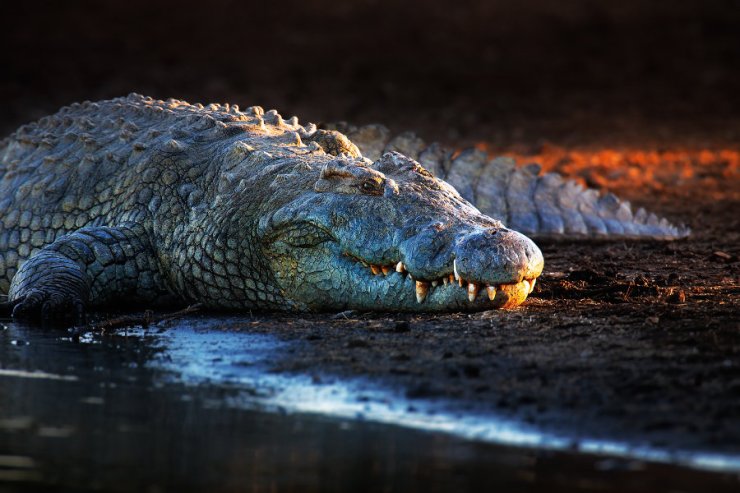 The situation of the Sahara’s wildlife is precarious but there is some hope as several countries that hold sovereignty over the Sahara are creating a network of national parks. Policing such areas is difficult as poaching is a continuing problem. Other activities such as exploration and drilling for oil also are disruptive to already vulnerable wildlife. The late Prof. Manning wrote: ‘All wildlife needs space and respect.’

The Kalahari is occupying some 70 percent of Botswana and is probably the single largest expanse of sand in the world. It also contains vast areas of arid savannas, extensive grassy plains and the greatest in the world complex of salt pans. The climate is harsh with summer temperatures exceeding 40 degrees Celsius, and dropping to minus 10 degrees Celsius in winter. The diversity of the Kalahari’s landscape allows for the greater variety of larger mammals than almost any other habitat in the world.

One little creature doesn’t need an introduction. They have been featured in countless photographs and documentaries in which they were observed in every possible way, always friendly if inquisitive, and I have had first-hand experience of just how curious they are. On making my first acquaintance with meerkats, one of them noticed that I was wearing crocs on my feet. He approached me boldly and proceed to put his hand in the holes of my crocs checking what was inside. Disappointingly, he found nothing but my feet. For me, it was an unforgettable encounter. Here, may I present to you – the celebrity of the Kalahari – the meerkat’s adorable baby. 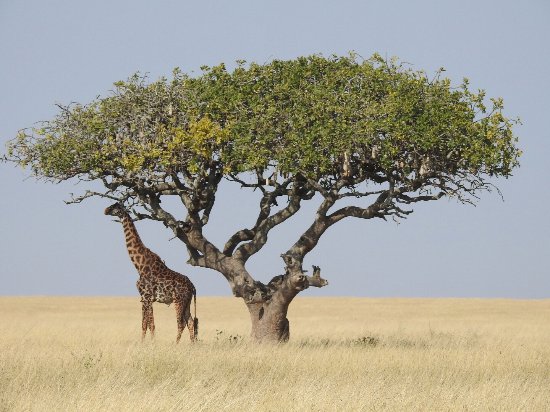 Zebras, giraffes, wildebeest, antelopes and big cats – lions, cheetahs, as well as packs of African Wild Dogs, move through the Kalahari in large numbers in search of water and fresh grazing. The Kalahari is known for a variety of acacias and thorn trees. Giraffes thrive on acacia leaves and can consume 120 kilograms of them a day. For a few years now, we have known about the defence system that the trees use, and which I wrote about in my previous posts. When one acacia’s leaves are being munched by passing giraffes, it releases a powerful tannin through the surface pores. The smell is carried downwind and the next acacia tree picks it up and automatically releases its own tannin in response to the message. As the tannin tastes very bitter the giraffes will never feed in the direction of the wind because all the acacias will exude the chemical. Instead, they will be browsing against the wind on unsuspecting acacias. It is a remarkable case of communication between the trees and the intelligence of animals.. 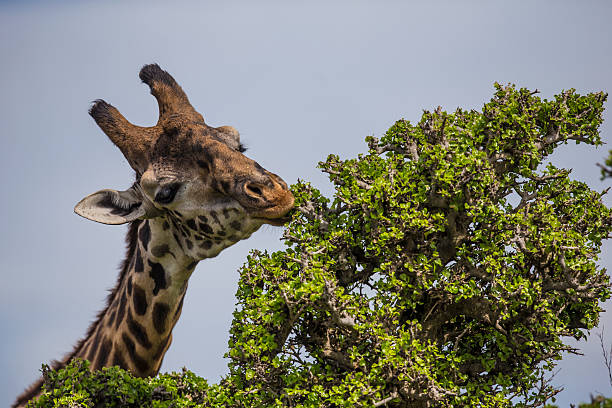 During the dry season, almost all animals congregate along a few remaining rivers. The wildebeest undertake the biggest journeys as they search for new pastures. Female wildebeest give birth to a single calf that can stand and move with the herd within 30 minutes of birth. This is a dangerous time for the young as predators are waiting around for a chance to take a newborn. 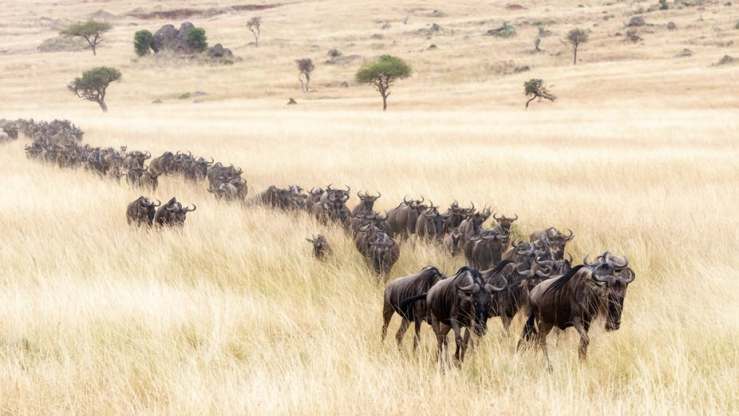 Among others, the Kalahari dwellers are Bat-eared foxes and Flap-necked chameleons. The Bat-eared foxes live in family groups and dine on their preferred feast – termites. If this is not available on the menu they will take anything going their way, such as small rodents or birds. Flap-necked Chameleons are rarely seen in the open as they make tasty pickings for predators looking for a quick snack. 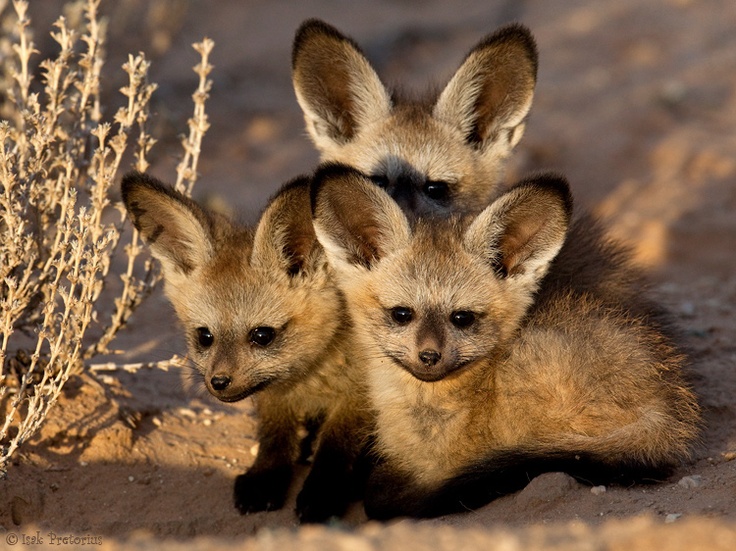 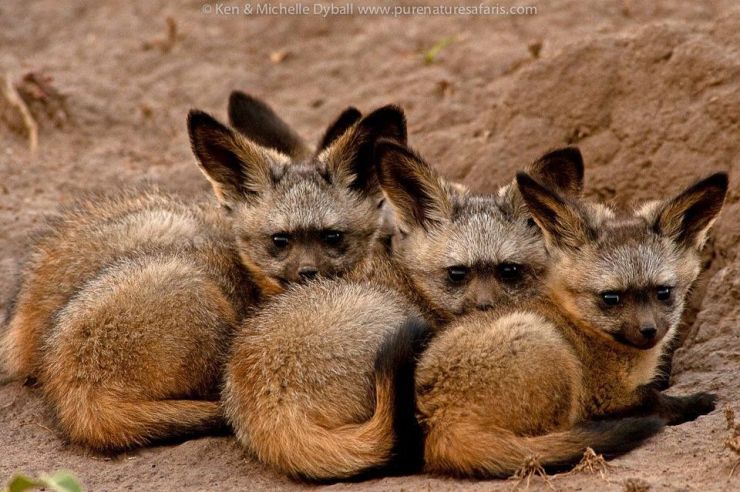 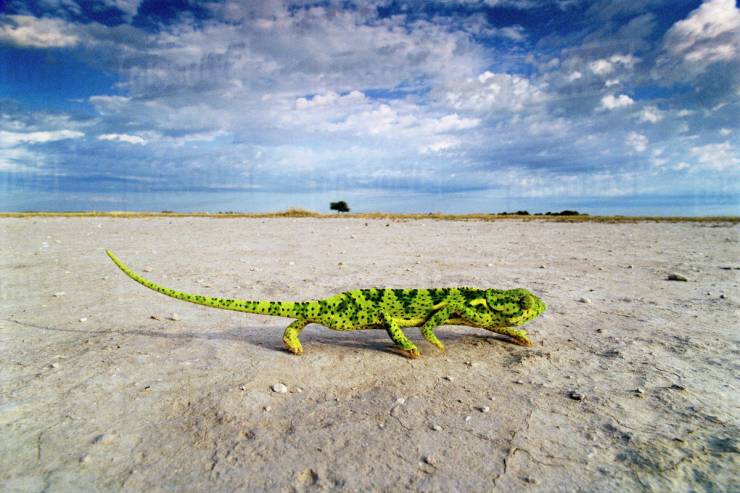 On the northern edge of the Kalahari are the remarkable salt pans which were originally part of a prehistoric super-lake that covered most of what is now northern Botswana. For several months of the year, the pans are a lifeless crust of saline silt and dust but from November onwards the rains arrive and the landscape undergoes a dramatic change. Huge herds of grass-feeding animals head here in anticipation of the rich pastures. The water-lakes attract thousands of flamingoes that come to breed here. This, in turn, is a sign for hyenas and jackals to start their periodic hobby of bird-watching. 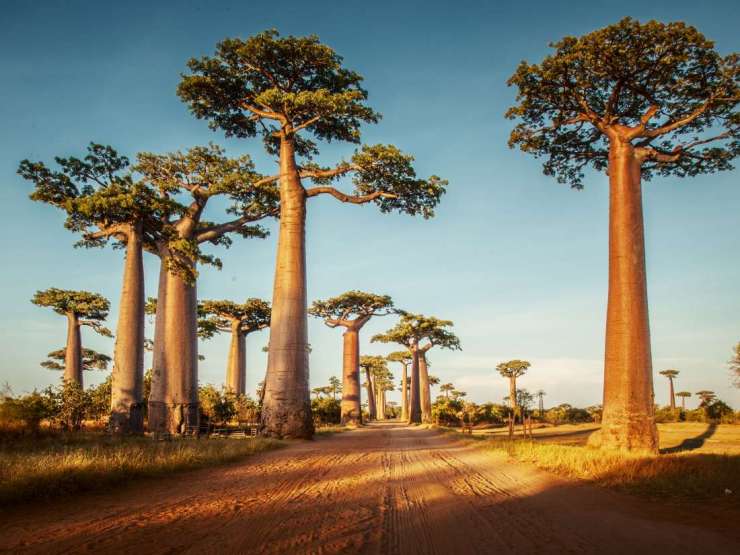 The great wildlife spectacle of the Kalahari desert is among the most impressive anywhere in the world, yet it is facing a wide range of increasingly complex and political conservation issues. Botswana’s government efforts to create conservation areas where wildlife is protected are opposed by the tribes who want to be able to use it as their hunting grounds. Who will win? 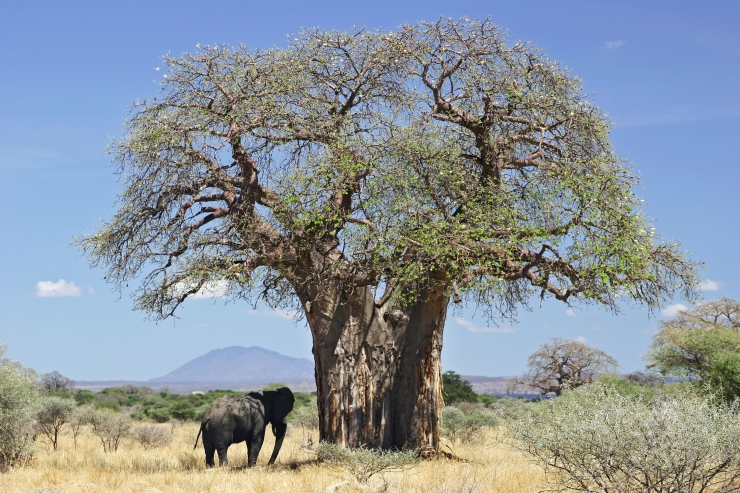