Recently I made a few interesting discoveries, all due to coincidence. They are valuable because I like to learn something new each day, and those provided by coincidence are the best. Some time ago I saw a painting that looked like it came from the Dutch Golden Age period. When my daughter acquired a few guinea pigs for her son, I remembered the picture of the guinea pig seller and tried to trace it. But who was the painter? After some research, I discovered George Morland, an English painter of particular rustic scenes of farms and animals and rural landscapes. He lived and painted mainly in the second half of the 18th century, and died in 1804. I think that apart from students of History of Art, there are not many people who know of George Morland, and to my regret, I didn’t. He produced thousands of drawings and paintings, and art dealers were queuing at his door with money in one hand and a bottle in the other. At that time his charming scenes were so popular that some drawings were printed and reprinted in their hundreds. Unfortunately, George Morland was an alcoholic and died at the age of 41. Reading his biography, it was not surprising that he turned to drink as his childhood was abusive and he was exploited from a very young age. He was able to draw to perfection at the age of three but was never allowed to have a normal childhood, as he was locked up in a garret to work, while his father was selling his drawings as fast as he could. 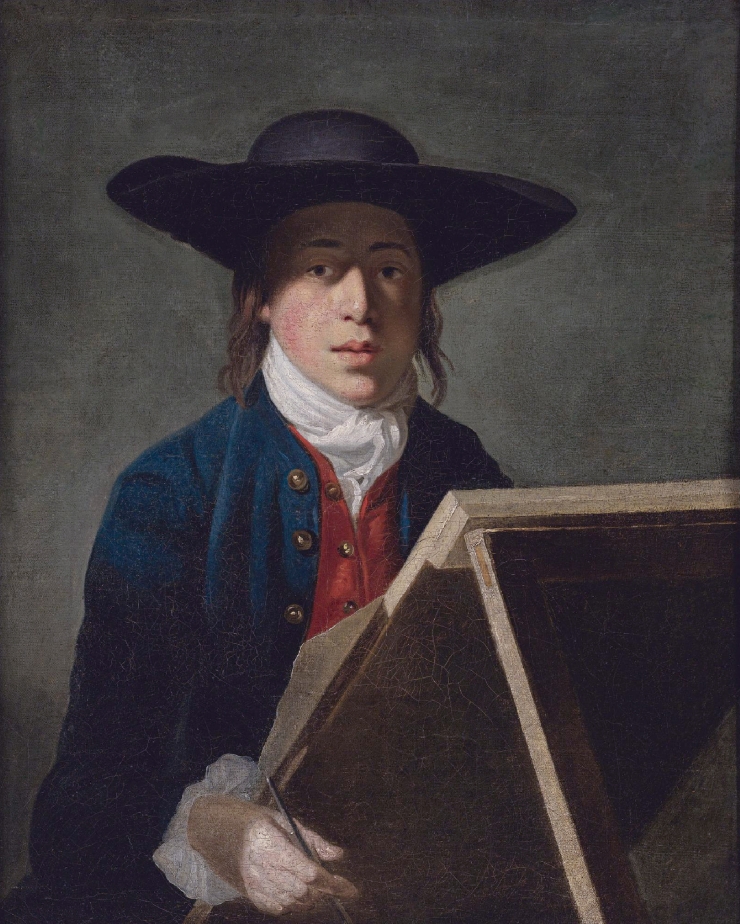 The origin of the guinea pig name is interesting as the creatures are not related to pigs but are called so because their squealing sounds like that of piglets. They were brought here from Peru by sailors and sold for a guinea each, hence their name. But I digress… 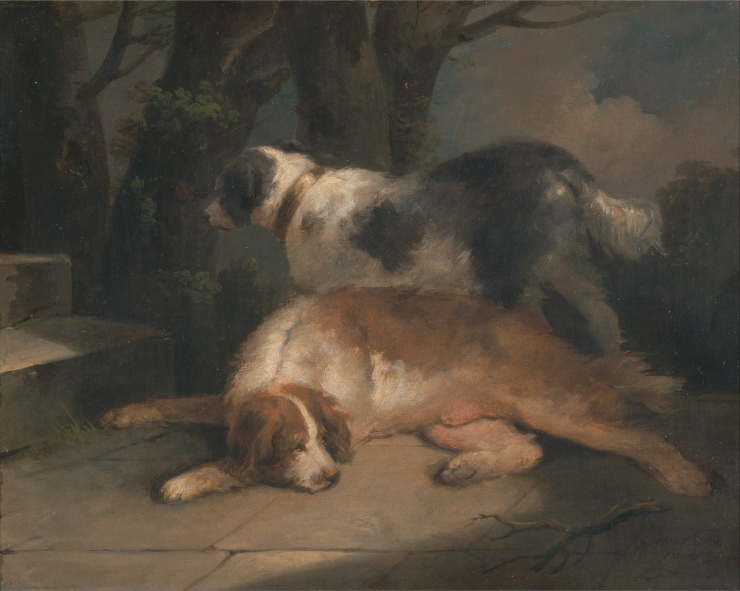 To appreciate the appeal of George Morland’s paintings, here is a small selection:

It is astonishing that George Morland could paint such a detailed painting like ‘The Old Water Mill’ above plus several drawings, all in one day. ‘The Winter Landscape’ is equally amazing in its beauty and photographic details of the tree, the sky, the horses, and the naughty snowballing boys. Once seen, the paintings of George Morland are never forgotten. George Morland’s paintings and drawings represent a historically important time capsule of the daily lives of ordinary people in the 18th century. The great painters of that time were mainly painting scenes from the royal courts, the aristocratic or very well-to-do patrons or great battles. I, like so many others, love to see the inside of stables, ordinary families (the guinea pig seller), and rural landscapes, since I can learn so much more about those times than looking at another royal family. And of course the animals; it is obvious that George Morland had great affinity with all the creatures he painted. Perhaps, because they were never, compared with the dreadful people around him, avaricious. 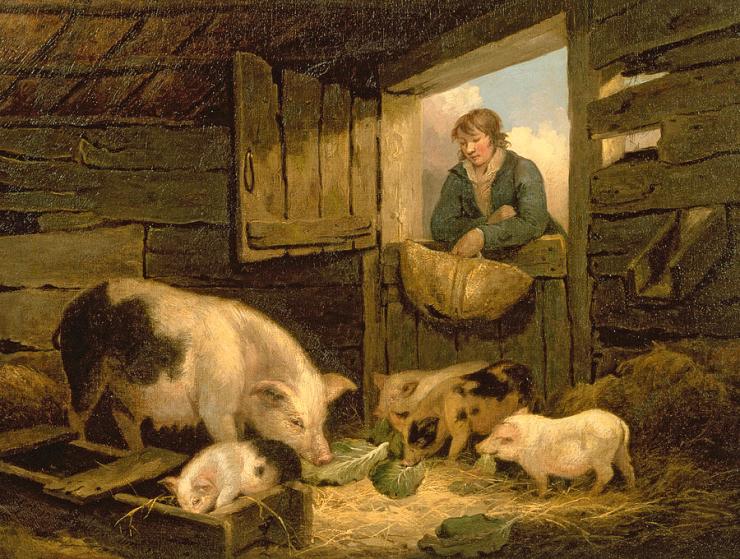 If it wasn’t for young Louie, one of my daughter’s guinea pigs, shown here:

I would not have discovered one of my now favourite painters, George Morland. Thank you, Louie.

If it wasn’t for a chance comment by one of my German readers about Hildegard, and her music, I would not have known much about her. Just as I was discovering the chants of Hildegard of Bingen, she and her work became well known again, brought back into the limelight after nine centuries. Her book on the benefits of a holistic life has just been published here as ‘Holistic Healing’ (the first time since 1903), and her views on nature, medicine, music, and spirituality are recognised as being ahead of her time and of great value now. This extraordinarily talented woman was multifaceted in her knowledge, and of such great intellect that today it would have taken her into space. She is admired by many, from feminists, nutritionists, music lovers to environmentalists. Some chefs have her name marked by the healthy dishes on their restaurant menus. After her beneficiation, Pope Benedict XVI honoured her in 2012 with a title Doctore of the Church, given only to four women saints. Bingen, a small, charming town in Germany is devoted to keeping Hildegard’s memory alive.

Below  –  Klopp Castle in Bingen 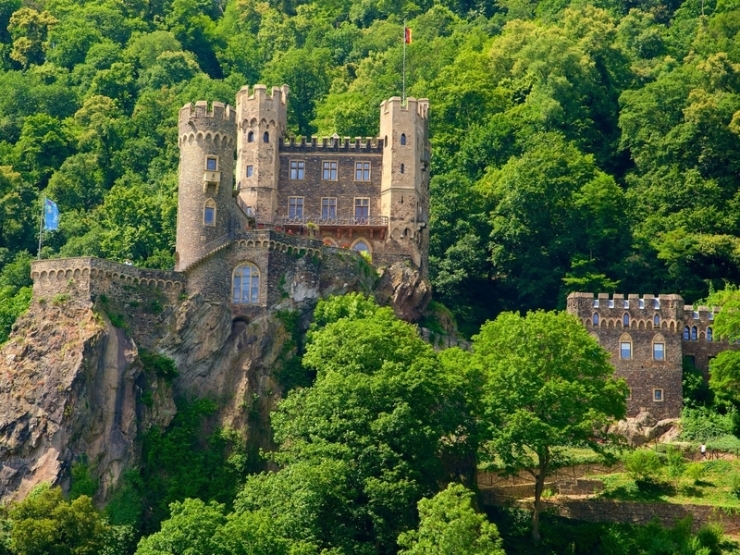 Hildegard wrote about a healthy diet, the healing use of herbs, and her rule to have porridge for breakfast is very much promoted in our health-conscious times. She is rightly regarded as a visionary pioneer of herbal medicine.  The back cover of her book states: ‘Introducing her ten key principles, including preventative health advice, fasting, the mind-body connection, meditation and ecological considerations, this practical book brings her original remedies to a modern audience. Discover the healing benefits of key foods and plants – plus which foods to avoid – along with recipes for plant-based balms and elixirs. There’s also targeted advice for alleviating common ailments.’ The book is indeed fascinating and worth having on hand to dip into when looking for vegetarian dishes.

Eibingen Abbey was founded by Hildegard in 1165 in Bingen, Germany. As an abbess, Hildegard used her medical knowledge to treat her nuns’ ailments, and also in helping others. She based her knowledge on the ancient Greek beliefs that our bodily fluids influence people’s temperament and health. These were: black bile, yellow bile, phlegm, and blood. Her own medical progression is now re-discovered in today’s Western medicine: in particular her healthy diet, her promotion of moderation and rest, and the necessity of treating the entire person, not just the symptoms. She believed that people’s spirituality was closely linked to their physical well-being. She was revered during her lifetime and corresponded with kings who sought her advice. She died in 1179 aged 81 leaving an enduring legacy in her works on medicine, natural sciences, music, and spiritual guidance.  There are many pilgrimage places but Bingen is the only place where the pilgrimage route is marked by a nun sign. The museum in Bingen is dedicated to her work and in particular, her spiritual visions that are shown there as the huge illustration painted under her supervision by the scribes of the illuminated manuscripts.

In this painting of one of her visions, angels are singing for the glory of God who is represented as a circle of light in the middle. Hildegard explained that God is Light, and cannot be represented in a human form.

I had many encounters of beneficial coincidence and the two most recent ones that I have presented above illustrate well this somewhat surreal, still unexplained, phenomenon.

5 thoughts on “The Remarkable Blessing of Coincidence”