When recently journalist David Wilkes, wrote an article ‘Verge of Paradise’, it brought to me in an instant the spectacular vision of a wildflower meadow I once saw in the Yorkshire Moors. I came unexpectedly across this little piece of land, and the beauty of the wildflowers was so overwhelming that  I had to stop and look with admiration at the poppies, red and tall, the cornflowers in contrasting deep blue, and then the rich diversity of so many others;  Field Scabious, fluffy lilac, Oxeye Daisy, white faces with deep yellow eyes, Meadow Cranesbill, deep blue flowers, gracefully tall and clump-forming, Yarrow, white, parsley-like flowers, Lady’s Bedstraw, yellow, Bird’s-foot, yellow and tinged with deep orange, Common Knapweed, very much like light-purple thistle, Ragged Robin, lilac, Betony, a straight plant with large bright purple/pink-magenta flowers, and this is just a small selection of the multitude of dazzling colours.

My own attempts at growing a small patch of wildflowers in my garden were not successful because wildflowers will thrive only on dirt-poor soil. As mine is as rich as I could make, it suits all plants and fruits trees but not elusive wildflowers. However, there is a change going on, and there are patches of wildflowers appearing on bits of ground here and there, and on the sides of some motorways. This is the result of the work of a charity Plantlife. Dr Trevor Dines, of Plantlife, said: ‘Given that we have lost a staggering 97 per cent of wildflower meadows in less than a century, it is almost impossible to exaggerate how crucial grassy road verges are to wildlife. We now have 238,000 hectares of road verges compared to just 85,000 hectares of surviving flower-rich grassland and for many plants, these roadside mini-meadows are their main refuge.’

‘Over 700 species of wildflowers grow on verges, nearly 45 per cent of our total flora, including 29 of 52 species of wild orchid. Road verges are both a last remaining refuge for some unbelievably rare plants and absolutely crucial to bee and butterfly populations now left with no meadow to call home.’  From 2013 Plantlife has been engaged in persuading councils to cut road verges later in the year. This is important because wildflowers develop seeds late in summer. The cuttings should be left for a few days on the ground for the seed to drop onto the ground. After that, they need to be raked up to prevent the fertilization of the soil.  So far more than 61,000 people have signed a petition urging councils to adopt Plantlife’s ‘good verge guidelines’. This is because some councils misguidedly used to cut the grass verges four times a year.

Dr Dines believes road verges play the most important part in keeping us connected to nature. He said: ‘The procession of colour from bluebells to knapweed through the year brightens our days, keep us in touch with the changing seasons and provides us with a real sense of place.’ 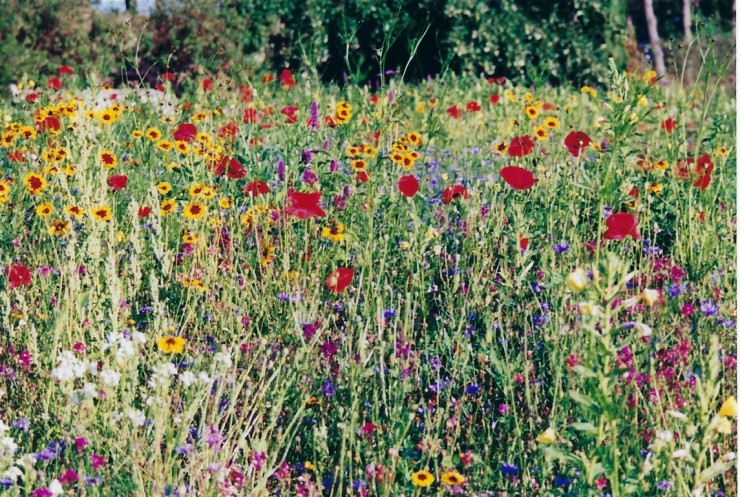 This is the meadow that I have seen in the Yorkshire Moors, and its beauty held me spellbound for a long while. You cannot help but look closely because the wealth of the flowers makes you want to see all of them, one by one. Dr Dines wrote about the therapeutic effect of nature, and in many places, there are now opening community centres offering gardening lessons. Some are for autistic children, or for children with other mental issues, others for the people with the beginning of dementia or suffering from anxiety, or simply being lonely. Those places are open all day long and everyone is welcome. Those who were asked said emphatically that they wanted to learn how to prepare the ground to plant the seedlings, then plant and water them, and then watch them grow. They use the vegetables to make their lunches and the flowers are lifting their spirits. Some of the older people would even say:  ‘I would not be here now if it wasn’t for this place.’ It is quite moving to watch the Down’s Syndrome children planting the seedlings with such tenderness and attention. Some GPs are now prescribing sessions at those centres instead of drugs, like antidepressants. This is the power of nature’s healing. 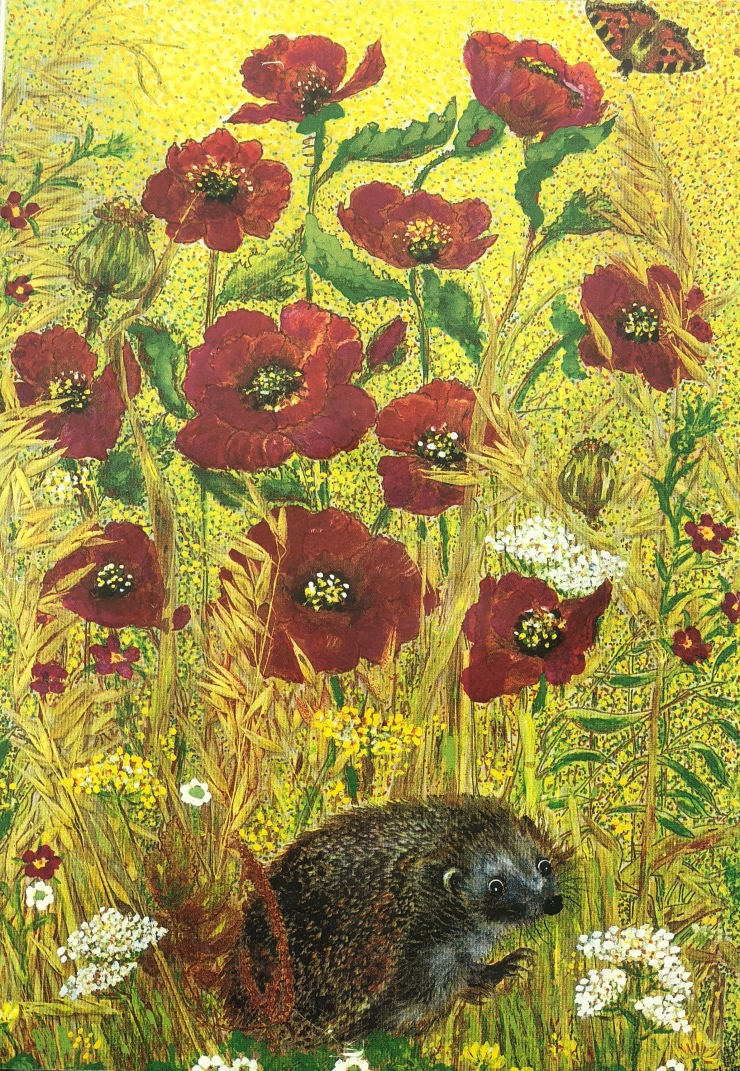 The picture above is my attempt at creating a dream meadow that I could not grow. The little hedgehog is Gaby who became diurnal for us to have more time together. I wrote about him in other posts in this blog.

In my previous posts, I wrote about raising awareness that even small changes happening all over the country will make a huge difference to our and our children’s well-being and the future of Earth. In this year’s Chelsea Flower Show, it was the role of trees that was highlighted. The garden designed by the Duchess of Cambridge was my favourite; from the title’ Back to Nature’ to the inclusion in the garden of trees, a brook, huge stones and pebbles to a tree-house and willow tepee, and wildflowers,  everything in this garden would encourage children to explore, observe and enjoy nature, and the fresh air of open space. New initiatives are coming up all over the country; from Backyard Nature to whole huge fields being cultivated as meadows. The Duchess of Cambridge announced her support for the children’s initiative Backyard Nature and said: ‘Spending time in nature can play a pivotal role in helping children grow up to become happy, healthy adults. The great outdoors provides an open playground for children to have fun  and learn life-long skills, from balance and coordination to empathy and creativity.’ The wise people who had the courage and wisdom to turn the large acreage of land into meadows are now reaping the rewards. In no time the meadows attracted not often seen if ever, wildlife like a brown hare and their business now brings large numbers of visitors; bird-watchers,  photographers, ramblers and those who simply come to look in admiration at the beauty of wildflowers. Despite often gloomy predictions as to the future of humanity, I think we are in with a chance, as finding ourselves at the edge of a precipice we have thousands of years’ examples of turning away from the edge. 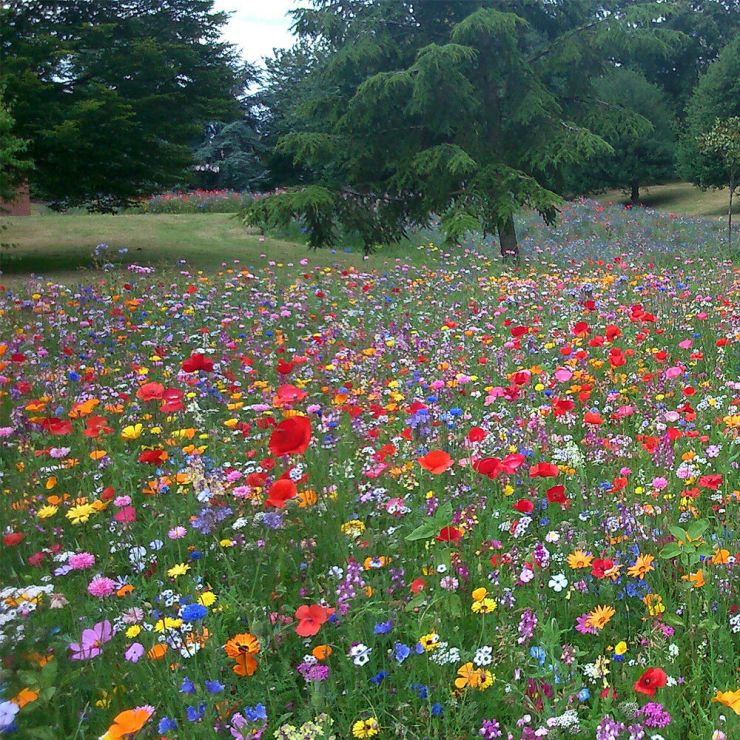 2 thoughts on “Verge of Paradise”