Halloween being just around the corner, my thoughts turned to bonfires and to the atmospheric darkness of autumn nights, and then to bats. The folklore of many countries includes bats. Sometimes their flesh was used as a cure for various ailments, sometimes as part of witchcraft ceremonies (as in Macbeth). Then there is the malicious association with Count Dracula, and a more accurate one as a weather prediction –  bats flying early in the evening meant a good next day ahead. The name originated from Scandinavia but was also associated with a ‘flying mouse’ as in German – Fledermaus. Now we know that appearance is misleading since bats are genetically closer to humans than to mice.

Lewis Carroll wrote in Alice in Wonderland, one of my favourite childhood books:
“Twinkle, twinkle, little bat!
How I wonder what you’re at!
Up above the world you fly,
Like a teatray in the sky.”

Apart from birds, bats are the only warm-blooded creatures which manage to take to the air. There are two groups of bats: those who feed on fruit and flowers and those who eat insects. The bats in the former group use smell to locate food, but insect-eating bats use echolocation. They fold their wings like vellum umbrellas, and they can see in the dark, despite having quite poor vision, because they can navigate safely by emitting high-pitched sound-squeaks that ‘bounce’ off anything in their way. There are many types of bats, and all of them are fascinating. Their flying ability allows them the freedom of travel. In Australia, the only creature who came from the outside was a bat, and the forensic examination of the fossil of one bat proved that it arrived millions of years ago from France.

To some people, bats seem ugly because of their hairy faces, leathery wings with elongated fingers and bodies that closely resemble those of mice. To me, they are not only beautiful but extraordinarily well-designed. The skin membrane between the fingers allows them to fly, and the folded wings provide safety when they sleep upside-down, hanging by their claws. On the ground, they are clumsy because their knees bend backwards which makes walking difficult. All bats have a good set of teeth and large ears, useful for echolocation. There are 950 species of bats in the world but in Britain, there are just: Pipistrelle, Horseshoe Bat, Brown Long-eared Bat, Natterer’s Bat and Noctule Bat and a few others. The female nurses her baby while flying, an amazing achievement as the baby is a quarter of her weight. Females only start breeding after they are several years old and they have an unusual system of delayed fertilisation. If they are not in tip-top condition in the spring, they can prevent fertilisation by keeping sperm separated from the eggs after mating.  Bats live a surprisingly long life, about 30 years or more.

The 11th-century market town where I live nestles alongside the Grand Canal. In summer, just after dusk, you can see groups of low-flying bats busy hunting for insects which are plentiful above the waterways. A small bat can devour 3000 insects in one night. It is necessary for the bats to gain as much fat as possible to be safe during the harsh winter months. After feasting as much as possible in autumn, when cold weather arrives and insects become scarce, bats hibernate. They like cool places like caves, abandoned mine shafts, barns or even attics of old houses and churches, as long as the places are quiet with a stable temperature and no draughts. To me, these enchanting nocturnal creatures symbolise the countryside, longevity, continuity and peace. They even feature on the coats of arms of two heraldic families: the Wakefields and Heyworths. At Hatfield House in Hertfordshire, there is even a beautiful carving of a flying bat on the staircase. Bats in Britain are now fully protected. Just as well because the continuing loss of their habitat and the changing climate poses a threat to the future of these fascinating creatures. Long may they prosper. 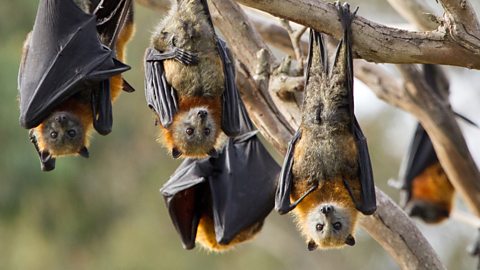