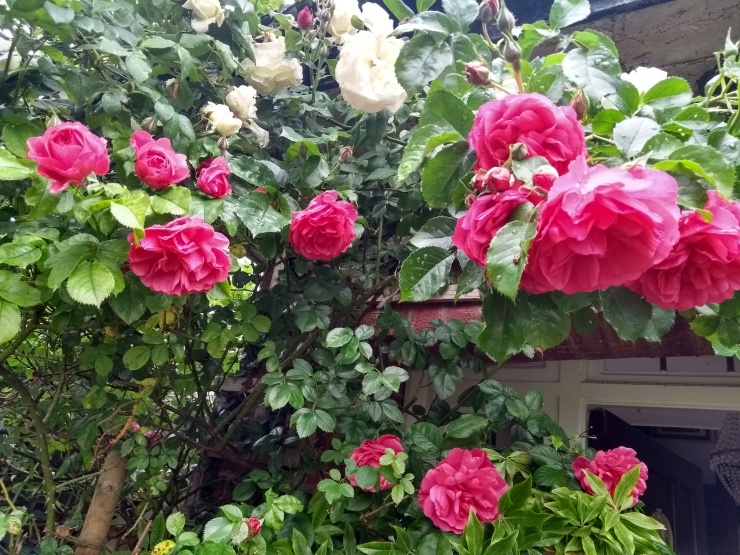 The last two weeks of glorious sunshine have accelerated the blooming display in my garden and everywhere else. The roses this year are so full of vigour that you can hardly see the leaves for flowers. Here is a little tip for those who are in a hurry, say with a new empty garden: I bought a few standard roses of good quality and let the tops to grow freely. Within a short time the main root-stock took over and now I have huge, several-feet tall rose bushes that when in flower, usually twice a year, are displaying for a few weeks, hundreds of roses to spectacular effect. Of course, if I were planning a line of standard roses to frame a pathway that would be a different matter, but planting them against the expanse of a high wall creates an enchanting, highly-scented vision of a well established garden that seems as if it were here for decades. 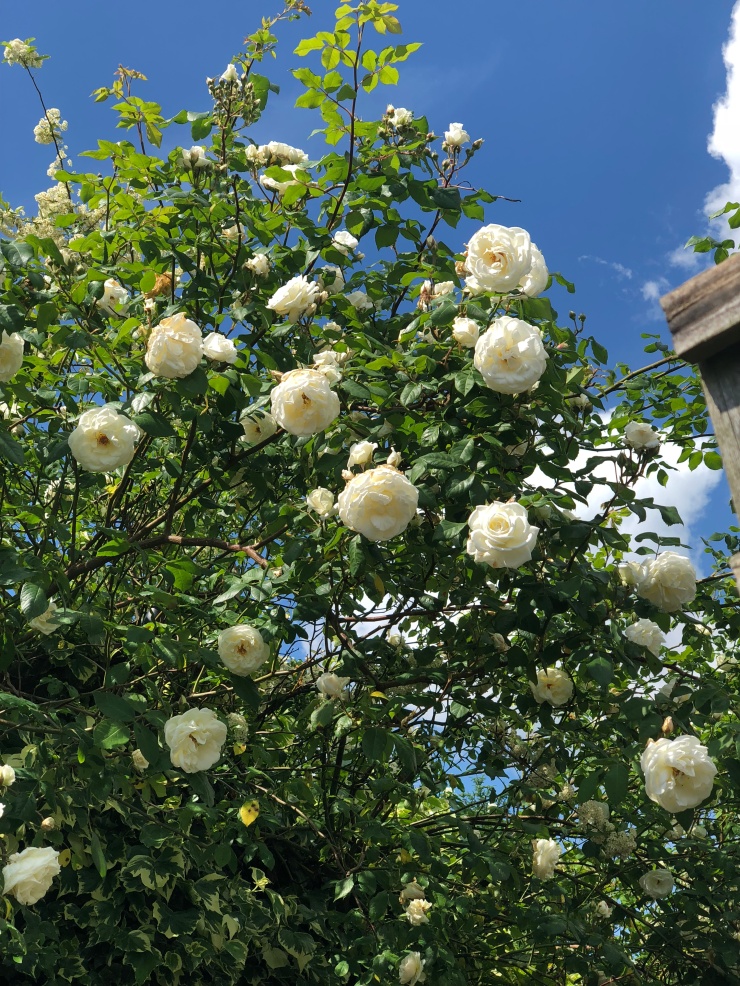 Another well-known method of creating an interesting picture in my garden is to plant roses beside apple trees. Again, this year the roses are all over the branches and the deep pink of the blooms ‘beautifies’ the green of the apple tree.  Another apple tree is ‘decorated’ with the large, lilac flowers of a rhododendron that was planted in a large tub (as I have alkaline soil ) by the side the tree. It grew taller and taller until now it is more than halfway through the canopy of the tree, and it looks spectacular. 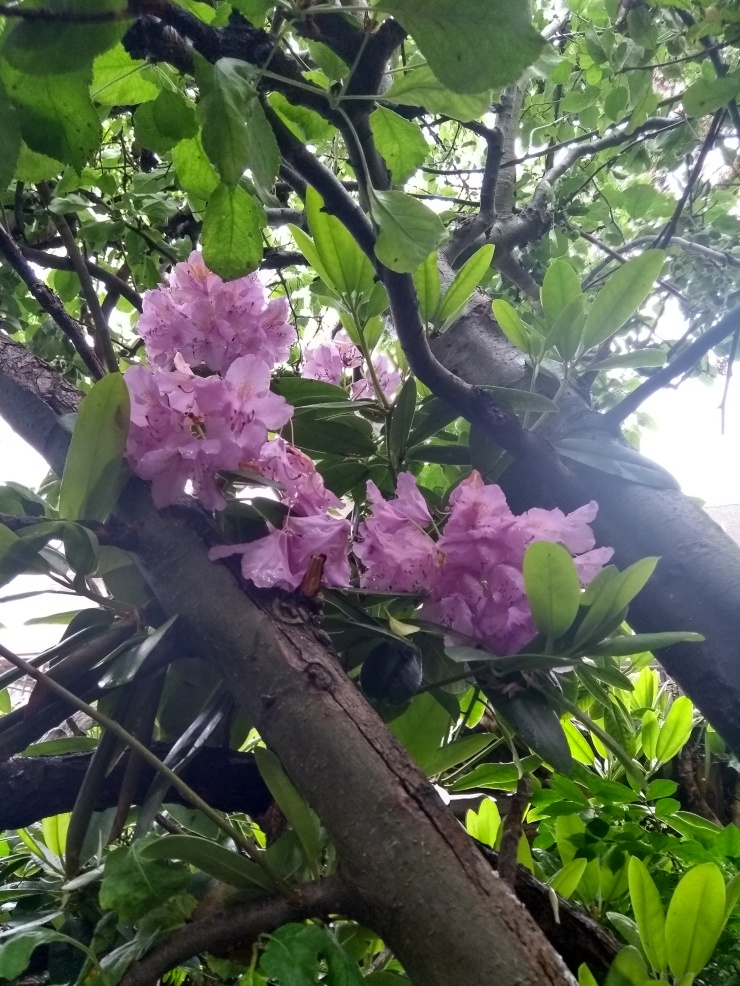 Early flowering bushes like Skimmia Japonica, Ferris, Weigela, and others,  have already provided fine dining to all the insects in the garden, including some butterflies.

There is a great need to plant many plants that are attractive to honey bees, bumblebees, butterflies and other pollinating insects as our town and cities are expanding at an alarming rate. We are now building on our green countryside, the fastest rate in 25 years, and planners are busy filling up the previously protected spaces between the towns, with new towns. No doubt, once built it will be much easier for the developers to expand in every direction. In the meantime our honey bees population is dwindling. Councils everywhere are cutting down huge numbers of trees (110,000 in 3 years) to save money on their maintenance, oblivious to the fact that the absence of trees – the lungs of the Earth – makes pollution, which kills humans and children in particular, rise to an unacceptable level. There are still many gardens that are not wildlife-friendly, and yet it is easy to turn any garden, even tiny, into an oasis for birds, insects, hedgehogs and frogs. Many newspapers and gardening programmes offer detailed advice on what to plant. Although I am just an amateur gardener, I am passionate about nature, and I will include in my blog all the plants that are loved by my army of wildlife garden helpers, in full Technicolor for those not as yet convinced.

One plant that is often misunderstood is ivy. The conviction among many people, even gardeners, is that nothing will thrive close to ivy, and roses in particular will perish, their root smothered by the ‘rampant’ ivy. As always, what is needed to solve the problem is ‘know-how’. Apart from the fact that ivy is extremely attractive all year round as an evergreen, and it will brighten every dull and dark winter’s day with its golden-green, lush foliage, it is also invaluable to both birds and insects. It offers safe nesting places for small birds, it flowers (highly scented) late in the year providing food for the larger birds and nectar for the insects. The solution to growing many plants, including roses, next to walls covered with ivy is simple: leg room for all the plants. My brick wall is covered with a thick layer of ivy, but in front of it I built a metre-high bed, in length 10 metres. The bed has all the plants that I wanted to include: Japanese laurel (two), Weigela (two), three very large climbing roses, three hydrangeas, two pyracantha and a collection of trailing plants that are cascading down the edge of the bed. I have included the pictures of white roses and Weigela as hydrangeas are still in bud. The scent of roses and pyracantha is intoxicating not only to scores of honey bees and bumblebees but also to me and my visitors. All I can say is long live the wonderful, beautiful ivy. 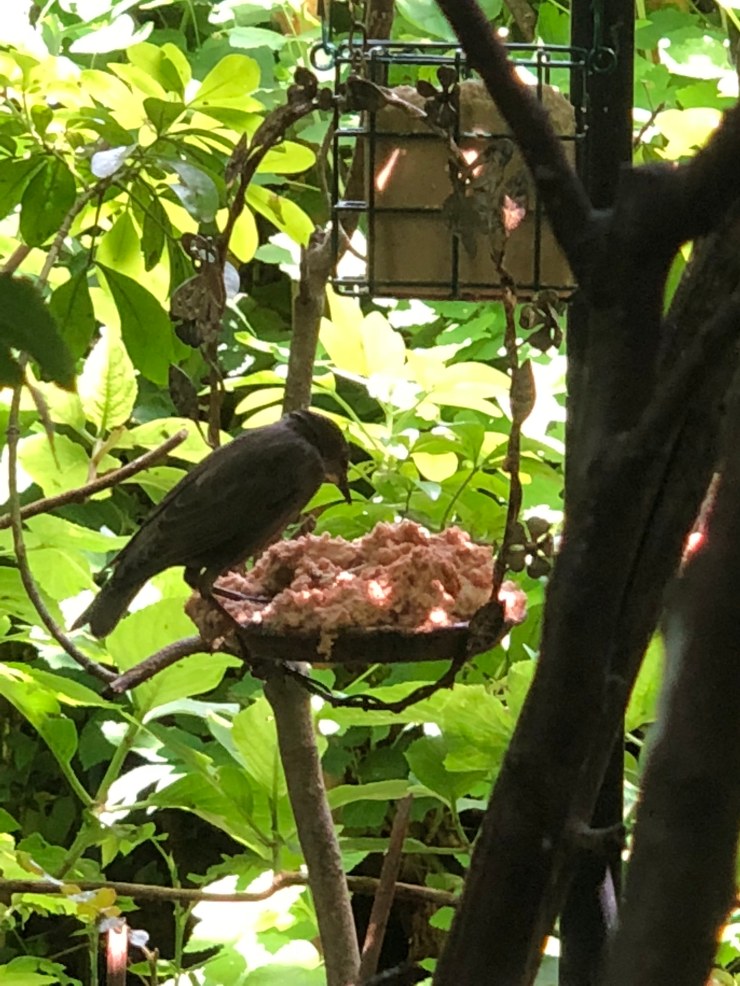 Another tip well-known to seasoned gardeners is to plant in overlapping groups of plants. Starting in the winter months with hellebore and evergreen, scented, winter flowering clematis, then following with early spring-flowering plants like Skimmia Japonica Ferris, then tulips and daffodils, rhododendrons, and roses galore in the early summer.

From June onwards, hydrangeas and later roses and buddleia will provide colour and food for insects. Depending on the size of the garden, if possible, it is good to have a few fruit trees, when in bloom always appreciated by bees. These can be a dwarf variety, which means they won’t grow over two metres. Low-level plants should include flowering herbs like rosemary, sage, fennel and chives, and daisies, valerian and tall, perennial lobelia. Cow parsley adds frothiness to the display. I should add that when in flower, pyracantha branches look like scented candyfloss.  Sowing masses of nasturtium, either trailing from the high edge of the beds, or anywhere where there is a bit of soil, will result in a fantastic hot-colour display for several months (Monet garden). I have to also mention the dreaded by many name – wasps. I have never been stung by them, but in late summer I feed them sugar syrup in a saucer, and they recognise me as friend. They repay me by eating aphids and flies, which is greatly appreciated, as my garden is wholly organic.

I will be updating the news from my wildlife garden during the upcoming months, also with many pictures of flowers and fruit.